Having ben transported to the Hall of Traps, we need to take out our lead line and test the depths.  For a sailor hidden dangers means shoals and reef and that's what I have for the Hall of Traps.

The Anglo Dutch Wars were fought in the Thames Estuary and along the Dutch coast, waters with many shoals and sand bars and some serious tides.  Tactics and maneuvers were often limited or controlled by these features.  The Dutch ships had an advantage s their ships had shallower draught and could sail where the English could not.

On the third day of the Three Days Battle, the English lost one of their biggest ships the 92 gun Prince Royal when she ran aground on Galloper Sand on a falling tide.  In normal times they would just wait for the tide to turn and float her off, but on this occasion she was acting as the rear guard for an English fleet in full retreat and had to surrender to the Dutch.  The Dutch got her off the sand but her rudder was damaged and they doubted they could sail her and so burnt her. 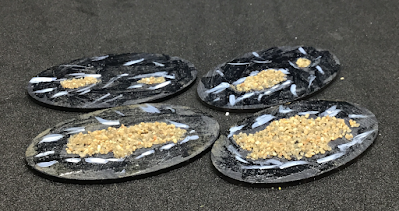 Shoal markers seemed to be a good idea for my Anglo-Dutch Was project, so I banged these four together fro spare pdf bases, paint and some traction sand for the front walk.  I have no idea on the points value but it can't be much.  Treating them as terrain gives me 4 pieces which are 2" by 1" in area and maybe 1/4" deep for a wapping 2 cubic inch in volume, or 0.925% of a Standard Terrain Unit 6" Cube.  I'll leave that to the Snowlord's discretion but whatever points it nets me will go towards my Naval Side Duel.

Posted by Peter Douglas at 8:38 AM