If the readers will forgive the indulgence, I thought I would do a recap of the year.  Looking back through blog posts, the gaming highlights were as follows.

As the year started, I was still a solo gamer, the basement gaming space was on hold following 2011's basement dig out and I was looking for ideas.


Curt has some better photos of my latest entry on the Analogue Hobby blog - however, I think I did a little bit better than a photo-recon plane under heavy flak!

This is HMS Eagle circa 1941, a GHQ 1:2400 scale model, with air cover provided by 10 1:1200 models from Cap Aero (Fairey Fulmars and Swordfish).  The Eagle was started as a Chilean super-dreadnought Almirante Cochane (her sister ship served as HMS Canada at Jutland and then as the Almirante Latorre n the Chilean navy unitl the 50s).   Work stopped during WW1, but the incomplete hull was purchased by the Royal Navy and converted to a fleet carrier in the 1920s.  She served nobly in the Med and Indian Ocean during WW2 until sunk by a U-boat on the Pedestal convoy of 1942 that saved Malta during its darkest hours.

I've painted Eagle in a camouflage pattern based on pictures off the interweb.  These all showed her starboard side, so I had to wing it on the port side.  The Cap Aero models are mounted two to a base to represent a flight of aircraft with florist's wire supports.  When I get around to the float plane scouts I will mount those one to a base.  The Cap Aero models are beautiful but fiddly, especially the bi-planes which need their top wings glued on.   There are 3 bases of Swordfish and 2 of Fulmars for a total of 10. 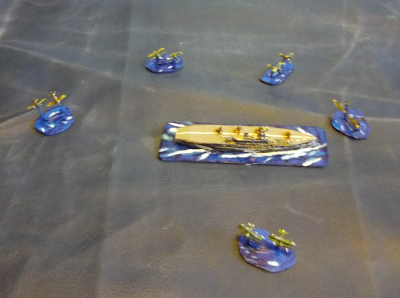 The Swordfish or stringbag is one of the iconic naval planes of WW2.  Archaic looking and slow, it was rugged and popular with crews.  It also made the sinking of the Bismark possible, scored the coup at Taranto and participated in the air attacks that led to the victory at Matapan.   It was still serving at the end of the war, having out lasted the Albacore which had been intended as it's replacement.  It turned out that the slow speed and handling conditions of the stringbag were ideal for the escort carriers used on U-boat patrols.

The Fulmar was a carrier borne fighter that did good service but was outclassed by land based fighters.  it was heavy and less nimble, since the RN demanded a two seater aircraft.  However, it was tough and had a good range.  It was phased out and replaced by Sea Hurricanes, Seafires and Martlets.

A Mixed Grab Bag of Ships


At our last game (WW2 micro-armour), Sylvain kindly handed over a mixed grab bag of 1:2400 WW2 ships (sic as we'll see).  He had purchased (off Kijiji) a box of many, many model ships in various scales, periods and stages of completion.  When all the dust had settled, he had multiple models and so offered me the "doubles".   This morning I cleaned up and assembled the lot (photos will appear when painted - as part of the Painting Challenge).

From best to worst, here's what I got.


So all in all, two fine hits (Rodney and Graf Spee), two near misses (Rodney and Renown) and two misfires (the two R class BBs).  But I am not going to turn down a free gift....now if I can only figure out how to get that gigantic wooden horse in the house....
Posted by Peter Douglas at 1:47 PM 4 comments:


I finished up a set of 11 WW2 merchantmen while watching the Dr. Who Christmas special this morning.  These are 1:2400 resin casts from Panzerschiffe - a large range of solid, workman like ships that covers many ships not available otherwise.  I find them too crude for warships but the 2 packs of merchantmen I picked up were tremendous value for money.

They come cast in battleship grey with a blackened funnel cap, and could be used straight up.  for a while, I considered drilling holes and adding masts and cranes (using wire and GHQ spares) but in the end I opted for a utilitarian approach and painted them as is.  And yes, I repainted the grey, then added layers of washes to simulate rust and grime.

The photos include 3 Hunt class DDEs which predate the painting challenge so shouldn't be counted.  As for the point value, I will leave that to our moderator and chief judge Curt.


We've got a windchill warning in Regina:  -30 celcius with windchills at -41.  We'll be sampling the Christmas cheers to keep warm.
Posted by Peter Douglas at 8:45 PM 7 comments:


I had a game with Sylvain last night with his 1940 MicroArmour using the Spearhead rules.  It was a fast play affair of a French counter attack on Rommel's division, the French were toast fast enough that we played it through twice after swapping side.  Sorry no photos were taken.

In round one Sylvain had the french (Char B's, R-39s plus infantry) and I had Rommel (T38s, plus a company of infantry with more T38s off table).  Being a gentleman, he gave me a tactical nuke (sorry Flak88) which basically ate a Char B every turn while I traded panzers for R39s.  When the rivets stopping flying I had tanks left and he didn't, and he lacked the infantry to boot me from the village where I was ensconced.

And yes Curt, Sylvain attacked with flair and elan.  From what I've seen Campbell's full of BS on this one.  I was led to believe that Sylvain made Kutusov look like Ney, and yet game after game I see bold (and possibly rash) attacks go in.

For round two, we changed sides and Sylvain replaced the Grim Reaper 88 with a battery of PAK37s (which were taken out early by the hull guns on my Char Bs). Sylvain cleverly used the gap in tank ranges (12" for Panzers, 9" for the French) to advantage, slowly retiring as I advanced.   He also got some tanks in a position to hit the soft underbelly (OK weaker side armour) on the Char Bs.  I tried to keep my armour and infantry in step and looked to have a promising attack lined up on the village.   However, I had rolled a Green division for this game and both tank battalions scampered after minimal losses.  Once again we had PBI looking at a village held by better quality troops with armour support and called it.

Micro Armour is like Marmite and you either love it or hate it.  Sylvain falls in the former category, and I tend to fall in the latter.  The vehicles look wonderful close up and he got some very effective paint jobs on them.  However, on the table they all look like blobs of slightly different colours.  I also link to make an attachment to my units, and find it very difficult when I have to squint at close range to identify them!

Rules wise I liked what I saw of Spearhead as a rule set.  And I like the idea of playing at a divisional or brigade level in theory.  However, on the table it always seems more like "Space Invaders" rather than military enactment - as the tanks line up and go bang until one side runs out of tanks and then you pack up and go home.  Oddly enough, it seems like the lower level games like the Bolt Action we played a few weeks back give one a better tactical challenge.


After some word class waffling on my part (I was in, I was out, no I'm back in again) I am officially listed as a participant in Curt's Analogue Hobbies painting challenge.


Seriously, I have a life which will likely get in the way until next week.  I'm a middle distance runner not a sprinter.  I am of course, only speaking metaphorically I blew my knees out slam dancing to the Sex Pistols in the 70s and then sealed the deal by falling down the stairs on a double decker bus full of Edinbouroghers (I'm sure I'll learn the correct term shortly) on market day.
Posted by Peter Douglas at 7:30 AM 8 comments:

Always A Busy Time of Year...


This blog has been quiet for a while now, due a very busy month.  I had 120 first year stats exams to mark this week.  That's been completed and the marks entered, and it's basically all over but for the crying.  Next week I have an ActSci course writing an exam, but there's only 16 students and their papers will be much easier to grade.  Oh yeah and Christmas is around the corner, with my mother in law due in the middle of next week.

Last week Curt put on a Napoleonic game using Fast Play Grande Armee and using 6mm troops, which I have to say I greatly enjoyed.  This was my first game with FPGA (or any of Sam Mustafa's games) and I will be playing a more.  I am still not  fan of 6mm troops (no comments on my decreasing vision), but the game was good.  Sylvain and I were the French a British force on the retreat to Corunna.  It was a close run thing but we beat Stacy's brits.
Posted by Peter Douglas at 1:15 PM 4 comments:

More pictures from the battle for the river crossings.


By this point, Curt had chased off the Aragonese left flank at the ford.  Meanwhile, a blunder roll on the Aragonese right resulted in a move away from the bridge, allowing Moslem jinettes and one unit of spears to cross the bridge.  The second unit of Curt's foot refused to cross the river, not wanting to get their fancy silk clothing damp!  Meanwhile, the crossbows still found reasons not to enter the village!


It's been a busy period with 4 social engagements in 8 knights, plus it was last full week of classes and we were Christmas shopping - I have slower years than last week!  So after a cocktail party last week end, Thursday night at the theatre (Wizard of Oz), and Friday night at the Symphony (Tafelmusik, an excellent Canadian Baroque Orchestra) - I regressed and devolved back to my geeky/troglodyte roots and went wargaming with two goofballs (Curt and Sylvain).

We used my El Cid period Moors and Christians and the Hail Caesar rules.  The scenario was the first from the Warhammer "Age of Arthur" book - I know that WAB has its haters and I am no fun of the Evil Empire, but it gave me good games and the resource books were excellent.  There was a shallow  river across the board, crossable everywhere at a penalty but with a bridge and a ford representing victory points.  Each side had 3 cavalry, 2 infantry and 2 light infantry units, the Christians having heavier cavalry and the Moors being stronger in light cavalry and bought better foot troops.

Photos below courtesy (or Curt-esy) of Curt. 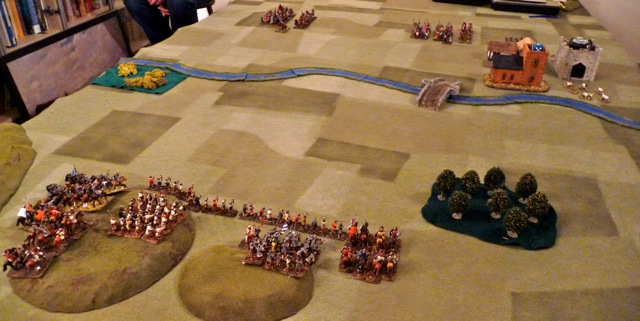 The table set up: wine, room, table top, Hotz mat and hills supplied by Curt.  Figures and terrain supplied by me - I was happy to find my orange grove and medieval keep in a basement clean up.  Aragonese to the fore and Zaragozans in the distance.