It's been nearly two months since my last post.  I've been doing games with our local group almost every week, but not much in the way of painting.  Fall is never prime painting time for me as its always a busy time with a lot to get done before the snow comes.

We've been chugging away at the Beowulf adventures and are now onto our fourth in the series.  To date my crew of adventurers has defeated a troll, a revenant and a giant adder all of which were unbeatable until they discovered their secret weakness.  No PC deaths yet, but there have been some close calls and deaths among their followers.

Prior adventures had been done virtually using Zoom and Roll20, but we are able to game face to face so I want to fight the final battle for the current adventure on table top.  It features a giant sea serpent and I found some time to paint one up. 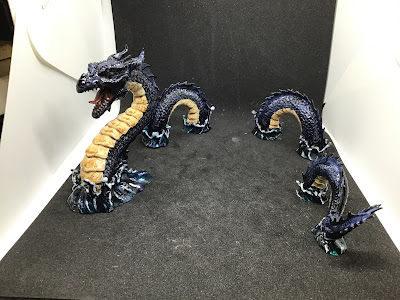 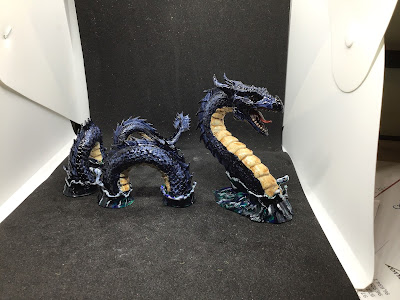 It's a 3D print sold by MyMiniFactory and printed off by gaming buddy Jeremy.  We'll see how the serpent fares net week/

Posted by Peter Douglas at 1:43 PM No comments:

The first Beowulf Adventure is the Hermit's Sanctuary, which Handiwork made available as a free download on Drive Thru RPG.  You get some pre-generated characters, a lite version of the rules and a very nice scenario.  This was created as a teaser for their kickstarter and like everything else connected with the game was nicely produced.

This adventure is a bit Agatha Christie with Trolls.  You hero (or in our case party of heroes0 goes to the aid of an isolated island sanctuary beset my a recently appearing monster.  The party had great fun working though what is essentially a looked room mystery.  The socail interactions with NOCs are nicely thought out.  For instance the order that you approach the NOCt matters  as success with one chaacter may lead to a better (or wrse) chance of success with another.  They had to peice together bits of the mystery from the NPC's stories, ancient standing stones and other evidence.

This was my first experience as DM in 40 years, and my first  experience with DnD 5e so I was rusty and made lots of errors.  I was too easy on my party, but it was fun with a good end result.  They solved the mystery, killed the Monster, sorted out a few things with the NPCs and sailed away.  Another weekends work for the Dark Age adventurer!

Posted by Peter Douglas at 11:20 AM No comments:

What I Played During Lockdown 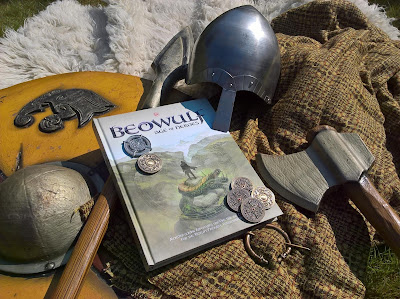 Our group did a number of Zoom games during the lockdowns over the last year.  One of the games was an RPG campaign DMed by me using Handiwork Games Beowulf game.  We had a lot of fun with this very well put together and thematic RPG.  It is based on early medieval epics such as the Anglo Saxon Beowulf, although there’s room for Danish, Slavic and Celtic heroes and even Irish Saints.

Beowulf is by Handiwork Games and is best described as a DnD 5e hack.  They took the core 5e mechanism, hacked out a few bits and added different stuff.  Gone are magic using PCs, DnD alignments, and character classes.  Every PC is a hero, essentially a beefed up fighter and the only magic is run by the DM or NPCs.  They have really bought into the early medieval theme and the world created holds up very well.Beowulf was designed to be run in tandem play, one DM and one Heroic PC with a number of NPC followers representing the heroes’ followers.  However, we’ve run it using a party of up to four PCs and it’s worked very well.  I just scaled back the follower NPCs and scaled up the bad guys as required

An Actual In Person Miniature Game

I've been rattling on this summer catching up on my paitning production over last winter's callenge becasue paiting since summer began has bascially come to a standstill. There's just too many things to keep me buy and by the time I call it a day it's after nine pm and I don't feel like setting my stuff up.
However, there has been a fair amount of gaming activity thus far in 2021, including some in person gaming at Curt's new clubhouse. Back in June I ran a 1879 War of the Pacific Ironclads game using David Manley's excellent  Dalhgren and Columbiad Rules. This was a repeat of a game first played in November 2020 just before we locked down for the pandemic again. I don't recall enough for a detailed AAR but highlights are as follows.

What I did During my Winter Painting Challenge

Chllnge wind up and sum up.

I am of course late out of the gate on this one.  But here are my wrap up photos.

All the ships were from WW2.  I had planned to add some Anglo Dutch Wars ships which only got part painted and some from the War of the Pacific which only got primer.  I gave Adam a reasonable chase in the early going of there Naval Duel but got left in everyone's wake at the end.  For some reason I decided that I needed every destroyer that fought in the Med in 1941-2, but I had fun researching the various classes, modifications and camouflage patterns applied.

January through March is a busy time for me.  I basically end up working 60% of each of two jobs so the challenge is a sanity break for me.  It's great to see everyone work and looking forward to next year.
Posted by Peter Douglas at 1:49 PM 1 comment:

AHPC Beowulf Characters for the Snowlord

Here's my response to the challnge issued by Curt. I'll have posts about our Beowulf games shortly. 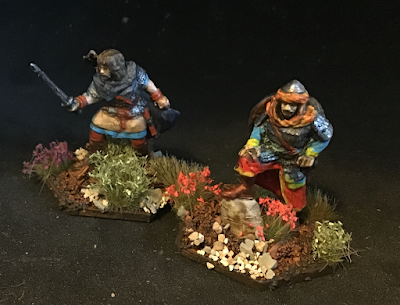 My last post and it's my two figures to lay at the Snowlord's feet.  I present two 28mm figures of the Heroes Ham Anfeald and Ibn Uthman from Handiwork Games Beowulf RPG.  These were 3D printed by Curt for me.
A bit of background.  I'm am not an RPG nerd and I am way more of a historical gamer than anything else.  But I was given inspiration by former Challenger Edwin to investigate the Kickstarter for this game.  I liked what I saw, story based adventures focused on a specific era and location and really honouring the source materials.  So I jumped on and the Kickstarted hit tons of goals and is delivering the goods. 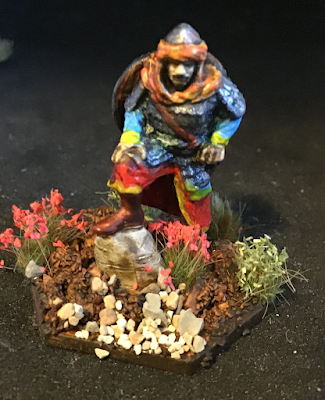 Ibn Uthman, Warroir poet of Baghdad is Curt's character.  He's been exiled for too clever word play and is fairly clearly modelled on Ahmad ibn Fadlan (as was Antonio Banderas' character in 13th Warrior).  I've tired to match the illustration below the Beowulf materials (the artwork in these is lovely). 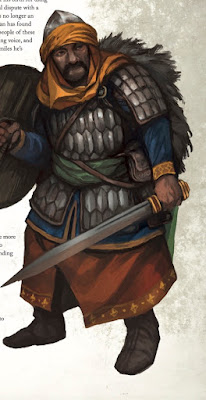 Gamewise Beowulf is best described as a dnd hack.  They took the base mechanisms from 5e DnD and took out the character classes (everyone PC is a hero) , PC magic use, alignment and races.  They then added in their own versions to suit the era and setting.  It's designed for GM and one player, but we've played it with a group and it worked well.  I'll need to brush up on my rules and GM skills and also I need to make the masters tougher, but game play was good IMHO.
The setting is the misty historical era between the fall of Rome and the rise of Charlemagne and there are terrific opportunities there.   This is the era of Beowulf, Arthur, the Irish Saints and the Sutton Hoo king where history and myth blend together.  I'm a sucker for a historical link so I did my fall gardening chores listening to Seamus Heaney reading Beowulf, dusty o my histories of Sub-Roman Britain and am trying to figure out which translation fo the Venerable Bede I should pick up.. 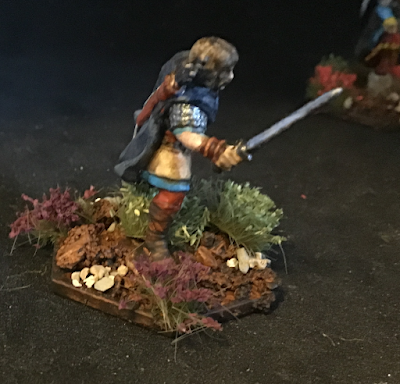 Ham Anfeald is Stacy's character and is a merchant ship captain looking for more lucrative opportunities. Again I've tried to match the illustration below.  Dark age colours are muted which requires a level of subtlety that eludes me but I'm fairly happy with the results.  the forges themselves are nicely posed with good features.  Metal versions are available as well. 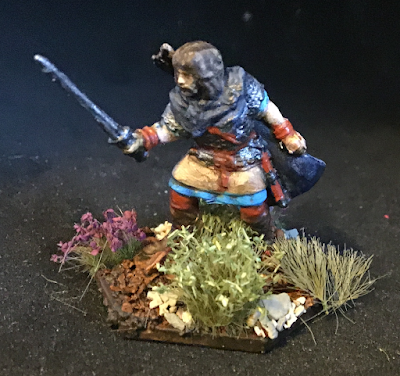 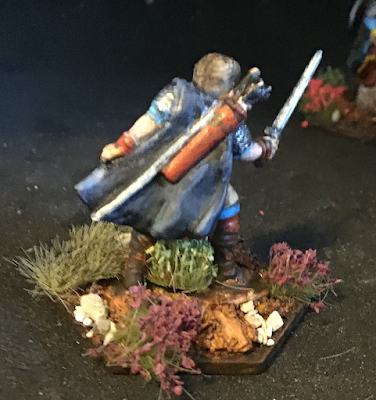 It's been a good challenge.  I hit my points target, made it to the Snowlord's altar in time and got the coveted Skull of the Week award.  I didn't paint everything that I planned to but isn't that the way things go...
Posted by Peter Douglas at 1:47 PM 2 comments:

Second last day of the challenge and second last post fro me, the Italian cruiser Trieste from GHQ in 1/2400.  I had the model primed in one of the first batches of work for this year's challenge but she's been kicking around the work table semi finished since December.

Trieste and her sisters were armed with 8" guns but only lightly armoured.  Her sparse superstructure are typical of e 1920s era designs,  The float plane on the foc'sle seems precariously perched and required that she steam into the wind to launch it.

I've painted her in a camouflage scheme that she wore in 1942 even though it comes from a later date than the era that I'm focusing on. She had a busy war attacking and escorting convoys.  She was torpedoed and damaged by HMS/M Utmost in late 1941 and sunk by US bombers in port in 1943. 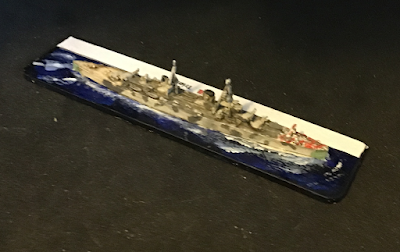 There's some interesting history in the naming of Italian 8" gunned cruisers of this era, all seven were na med for former Habsburg territories taken over by Italy after WW1.  The three name sake territories for the  Trento class (Trento, Trieste and half sister Bolzano) all remain Italian.  But three of the four Zara class (Zara, Pola and Fiume) were named for territories that are now Croatian (and renamed) with Gorizia being the sole exception.   None of the seven ships survived the war. 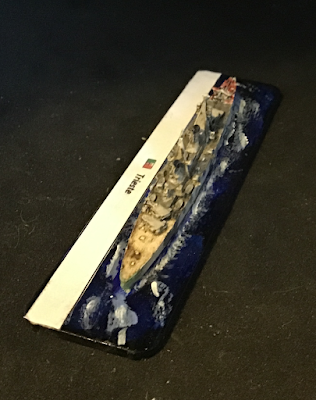 As Trieste sails off so do my entries in the Naval Side Duel.  That's another hull and another two points and a tip of my hat to Adam and the other participants in that challenge.
Posted by Peter Douglas at 1:46 PM 2 comments: