As part of the AHPC, I was given a personal challenge by Curt the SnowLord on reaching the summit  . 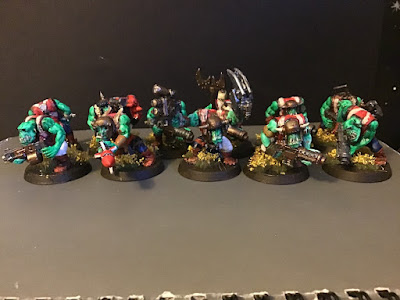 A squad of Orks approaches the summit.  They are tired, cold and hungry but they are determined to complete their task.  The Boss in charge addresses the Snowlord.

"Oi Furball!  Are you the oversized Care Bear that's been givin' our mate Pete a 'ard time?  'e sent us up 'ere to sort things out and collect 'is loot from you. 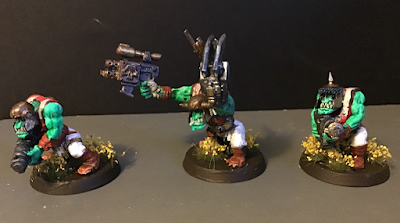 Pete said we should introduce ourselves and tell you a bit about us.  We's from Crud Camphell's Crudsaders from the Evil Suns klan, as you probly figgured from all da red we's wearin'.  We's vetruns  we is.  We fought the Sandbagger, the Evil Badger of Kent, and the ar*ehole who keeps trying to tell us what our names really mean.  We fought in the Spider Vehicle War, the Plaid Primer Incident and the Duel of the Skullz.  I'd tell you more but my finker don't work so good afta too many KABOOMs!  Dok Hurty is s'posed to be the unit historian, but he and Millzy spend all their time pokin' each otha in the eye and it never gets writ down proppa. 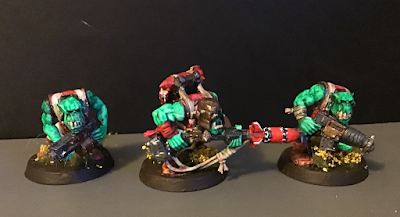 Pete likes dem Ancient Geeks so we'z modelled out kit a bit on dem, wit all the red and bronze bitz.  We also like dem Eytalians 'e does so some of us went for the bi-coloured pants - of course we 'ad to let out a bit in the seat.  Ray like liked the Eytalian look so much he even slashed and fluted his codpiece if you want to have a peek. 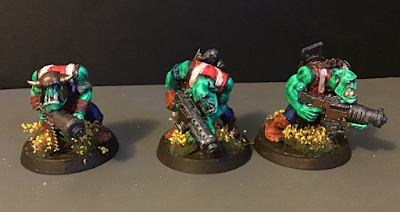 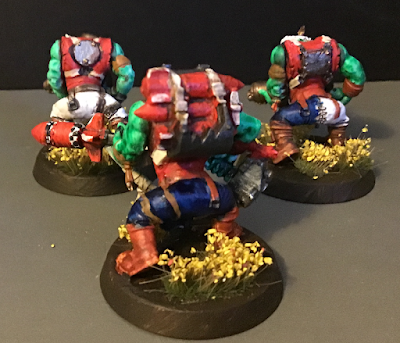 Anyway's there's sposed to be some reward fer us to collect up 'ere. I suggest that you cough if up snappy like cuz the boyz are getting 'ungry after that climb.  Mylez over dere figgers 'imself a chef.  'e found sum fungi comin' up the hill and some 'erbs over in da garden and he reckons 'e can make a pretty good Eyetalian stew outta you.

So it's up to you big guy!  You can hand over da loot and point uz in the direction of the nearest pub wit an all day breakfast and we'll be outta yer fur pronto.  Or we can let Mylez and Burchy 'ave a go and we'll dine al fresco up 'ere. 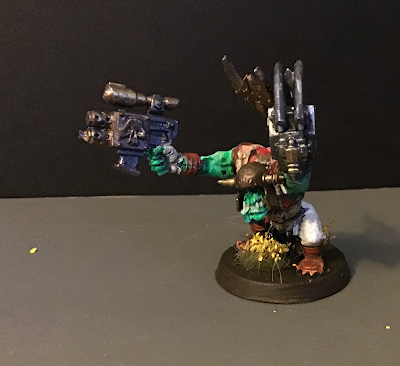 So this is a unit of Oak Boyz straight outta the GW box, 9 regular boyz plus a  nob boss and a rokkit launcha squad weapon.  I went for the Shootas over the Choppa and Slugga option to get a bit better firepower (such as it is).  I had more fun than I expect with these guys.   I made a bunch of rookie mistakes and maybe learned a couple of things along the way.

I didn't use the GW canon paints but my research indicates that some freedom of expression is OK with Orks who use what's lying around anyway.  The green is pretty vibrant but no more so than what I found on picture searches so I left it so.  I avoided the evil transfers in the box and free handed the checkers on the rokkit - they look much better on table than in my close up pictures.  When my wife saw these guys she thought that they were ugly and needed softening up and that I should add flowers to the bases - which I have done.

I did look at Space Marines but got bogged down in all the arcane Marketing BS - it left me whimpering like a small girl and longing for the warm embracing comfort of Napoleonic regiment facing colours, piping, company pompoms and musician liveries.  So rather than drink the purple Koolaid  um become assimilated into the Borg Collective, um pursue Space Marines I went with Space Orks who are less regimented.  Plus I figured that if I'm going stupid I'll go all in stoopid.

So my brief was

I believe that I have completed the required elements of this technical program and await the judges scores in the kiss'n'cry area.
Posted by Peter Douglas at 10:57 AM 8 comments:


With the AHPC wrapped up I'm now taking part in the Quarantine Painting challenge.   This is my first post.  I still have some final posts from the regular challenge to get on this blog, but I'll get there!

I am a bit late off the starting gun with my first post but here goes.  I've got some Tumbling Dice 1/2400 scale ships from their Anglo Dutch Wars range.  This project was meant to be one of my big focuses for the regular challenge but I had issues gluing sails to masts and then got distracted by other projects that weren't as fiddly to assemble.  I think I finally figured out how to assemble these little ships reasonably and hopefully will have more to come in the Quarantine Challenge.

Assembly issues aside (all of which lie between the seat pad and the cutting mat) these are lovely little ships with a nice amount of detail and paint up nicely with a gentle hand.  You can get away with more basic modelling skills vis a vis larger scales and don't need to rigging if you don't want to.  I've been inspired by Barry Hilton's work over at his blog (oh sod that I flat out blame Barry for getting me interested in this period).  Go get lost there to see ships with very nice paint work and rigging.

First up a set of English ships.  Two of these appeared in my later flurry on the last day of the regular challenge, but they've been touched up a bit and given names and flags.

I played a little loose with flags on these ships trying to balance historical accuracy, game play and my limited  fine motor skills.  These larger ships were all in the Red Squadron so where red ensigns at the stern, if somewhat oversized.  (My dad could tell you the arcane rules of using of red/blue/white ensigns in modern times but in 1666 it was much easier!)  I've added a Union Jack (again oversize) at the main, apparently this was first used in Charles II reign.  Royal Oak gets an additional red ensign to denote her flag role at her foremast.  The labels include the ship's name, a Union Jack to show nationality and red ensign to show that they are part of the red squadron.