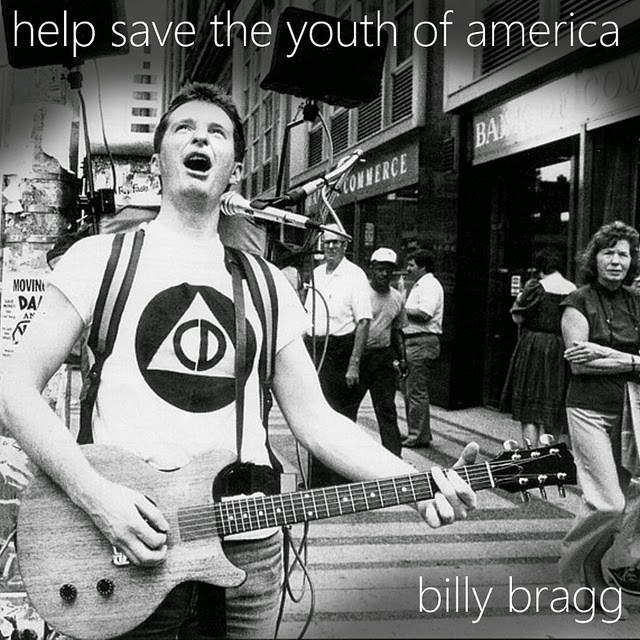 OK so I figured I ought to find a video that took a harder look at the "good guys" in the Cold War and thought immediately about one Billy Bragg, punk/socialist/folk singer.

Mr Bragg lets the US have it with both barrels and truth be told he scores a lot of hits with his shot gun splatter.   I figure a little introspection and self criticism never hurt anybody, but lets face it  I'd have taken the West over the East any day.  A lot of the points made in the 80s still hold true in 2014 - for instance with in the last 2 years PBS had a special on efforts to replace Evolution with Creationism in school biology texts.  So yes it may be land of opportunity but there's still a monkey trail on TV!

This video was filmed in the USSR in 1987 (well before the USSR ceased to exist)!  There's cool shots of Billy in neat looking hats and T-shirts, interacting with regular Ruskies and a steam train with a genuine Commie Red Star on it (how cool is that).  And my god Billy looks young and innocent.

And for all those young kids who wanna be rock'n'rollers:

There's a great interview with Billy on Q here.  He ranks on the list of rockers that I would like to chat with over tea in this case!. 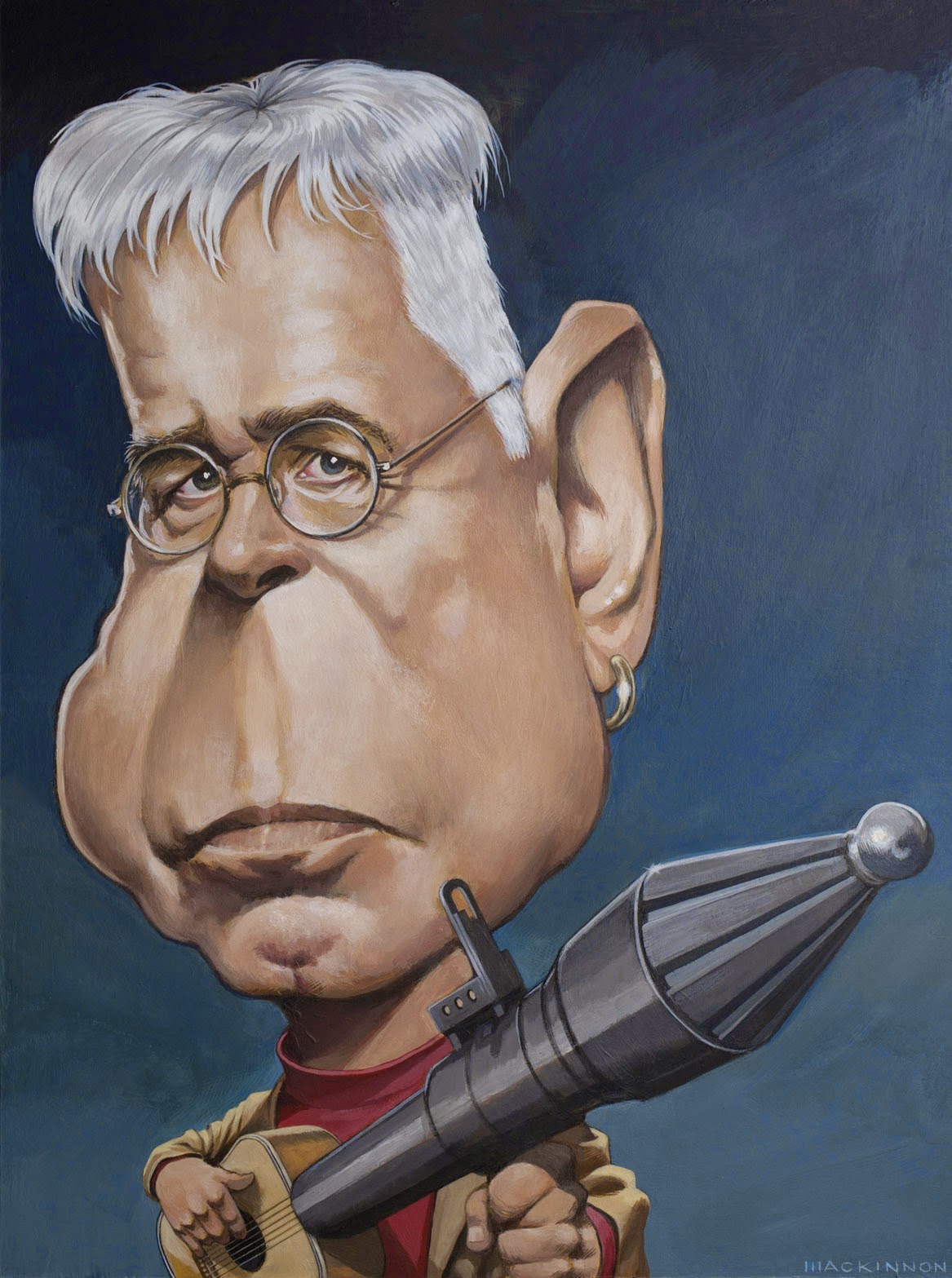 This week's Cold War Music Box selection is a Canadian classic (at least in Canada) and has been moved up a day to Tuesday July 1 for Canada Day.  More on the track later but first few words from our sponsors.

So What is This Cold War Music Box Thing You've Been Annoying Us With?
It started with my game of Funny Cold Wars with Tim Gow of Megablitz fame back in the first week of May.  In particular Tim made references to Top of The Ops circa 1979.  Coincidentally, I spent much time  both during and after my trip to the UK on airplanes with my iPod ear buds in and of course being a child of the 60s, a teenager of the 70s and a university student of the 80s, a lot of my play list came from the cold war era.  The game plus the music plus sleep deprivation led to Cold War Music Box.  Basically I come up with tunes from the Cold War Era and with Cold War related themes and load up videos onto the blog to torture my few readers.  This is likely a violation of the Geneva Convention, but heck the US got away with playing the theme from Barney 24-7 at Gitmo?

So Other Than Torturing Us With Your Taste in Music, What Else Have You Been Up To.
Travel mostly, and most of it work related.  Five days in Boston, five more in Portland Maine and three in Vancouver.   It was supposed to be three days in Portland but United Airlines decided to keep me there for two more due to thunder storms.   When you are flying from one regional airport (Portland) to another (Regina), it takes 2-3 legs and any delays mess your connections up.  I eventually took at 5am bus from Portland to Boston to get home.  When not traveling I have been either recovering from travel or catching up on stuff that got added to my list while travelling.

And yes when you're stuck in Portland Maine and it's piling rain you can do things like cue up several weeks post with annoying music videos.  On the plus side the seafood was excellent!


So Not Much Game Related Stuff Recently?
Reading yes, and a bit of reorg and a couple of board games here and there.  When I've been home often my gamer circle hasn't been.  Early July looks good for a couple of games and I'm due to do an El Cid game.

Ok Enoght BLather What is This Weeks Tune
Burce Cockburn's If I Had a Rocket Launcher a song that had the most ardent lefties (due to content) and the most ardent right wingers(due to wanting to use a rocket launcher) singing along.  During the Cold War era, the US and USSR didn't fight each other directly but rather through proxies in dirty little wars all over the world.  And if anyone can tell me which side's "Freedom Fighters" were worth supporting I'm a Dutchman (Sadam being the most obvious example).  Social activist super-hero Cockburn was in Central America doing aid work and saw the effects up close and wrote this decidedly non-peaceable anthem.

Regina is drying out after a very wet weekend - 91 mm of rain over two days following about 10 days of on and off rain.  Photos below.

While neighbours were spotted lugging pumps and hoses about and pumping out their basements, ours stayed dry thanks to the work we had done a couple of years back.

We have a strange yellow orb in the skies (it burns the eyes) and it's scheduled to last 10 days.  Hopefully our very wet garden dries out before then.

Oh yes and Happy Canada Day!
Posted by Peter Douglas at 9:50 AM 2 comments: