The last few shots from our Cruise on May 2-5th. 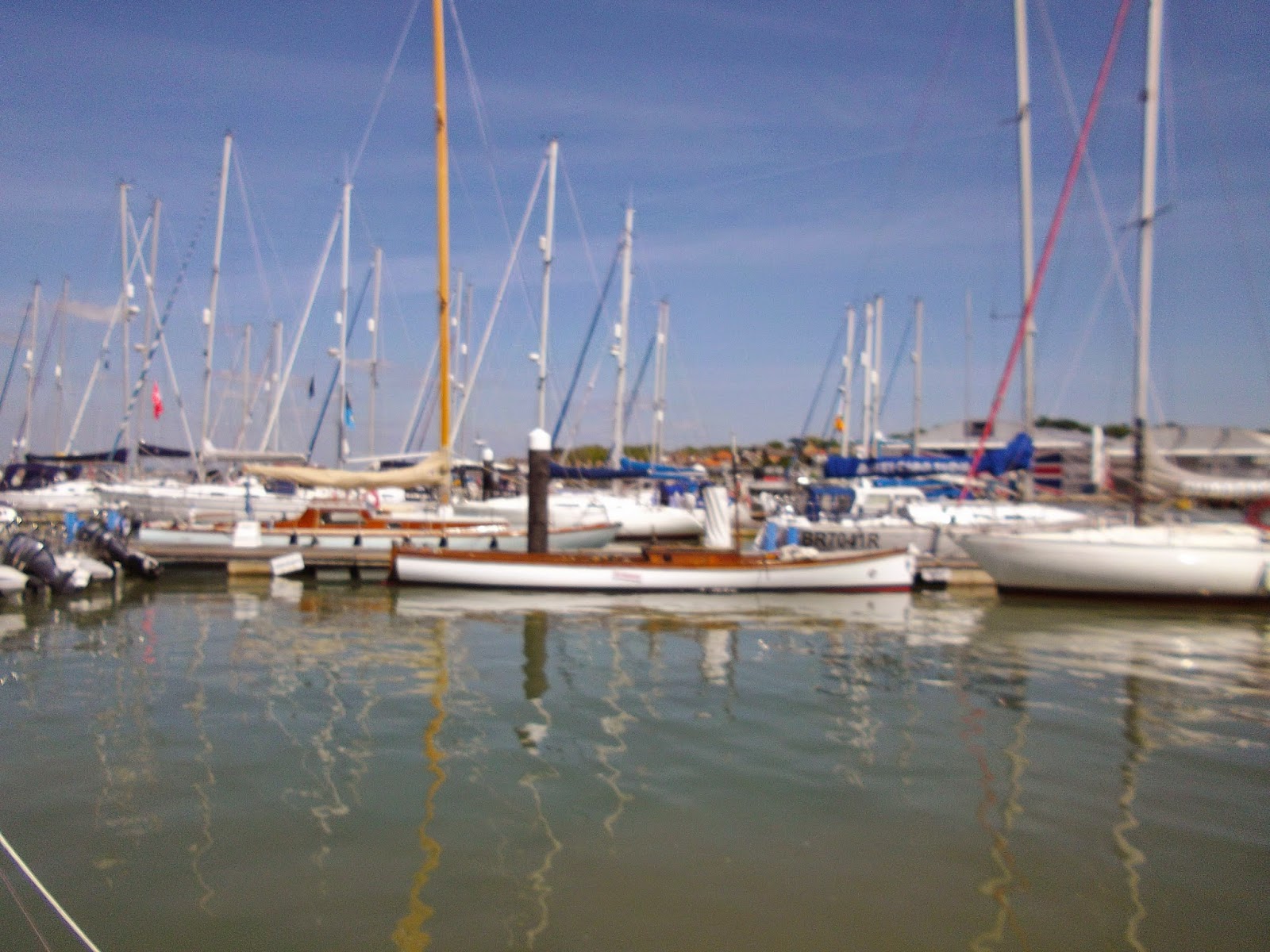 This Victorian era steam launch was tied up in the same Marina in West Cowes.  Lovely craft with white canvas funnel and bright shiny bronze engine bits (I am not an engineer) exposed.  Useful in the iron clad or colonial era for picket duties, landings or as a torpedo launch.  Dad tells me she still runs well and is often out and about in the Cowes area. 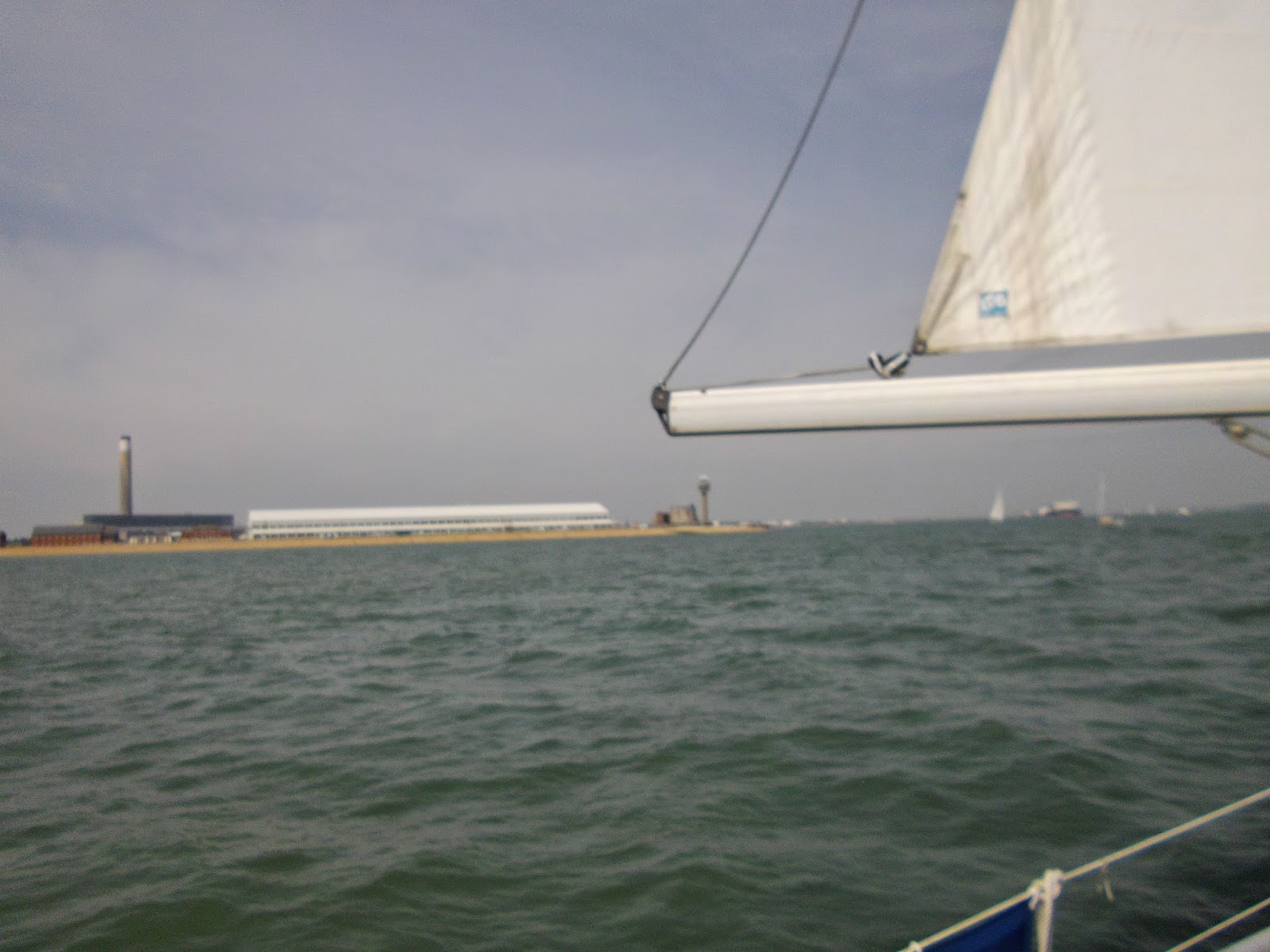 Two shots of Calshot Castle one of Henry VIII's shore forts.  It has the classic round shape which is not visible in the this shot.  What is visible is the main sail which shows that we did sail back from Cowes to the Hamble.  The jib halyard proved completed mucked up on inspection in Cowes - with the sail falling at our feet and the halyard at the mast head.  However, the wind was favourable to allow us to sail back under main alone.  The boat was due into the shop any way and dad tells me that the rigging is now mostly fixed. 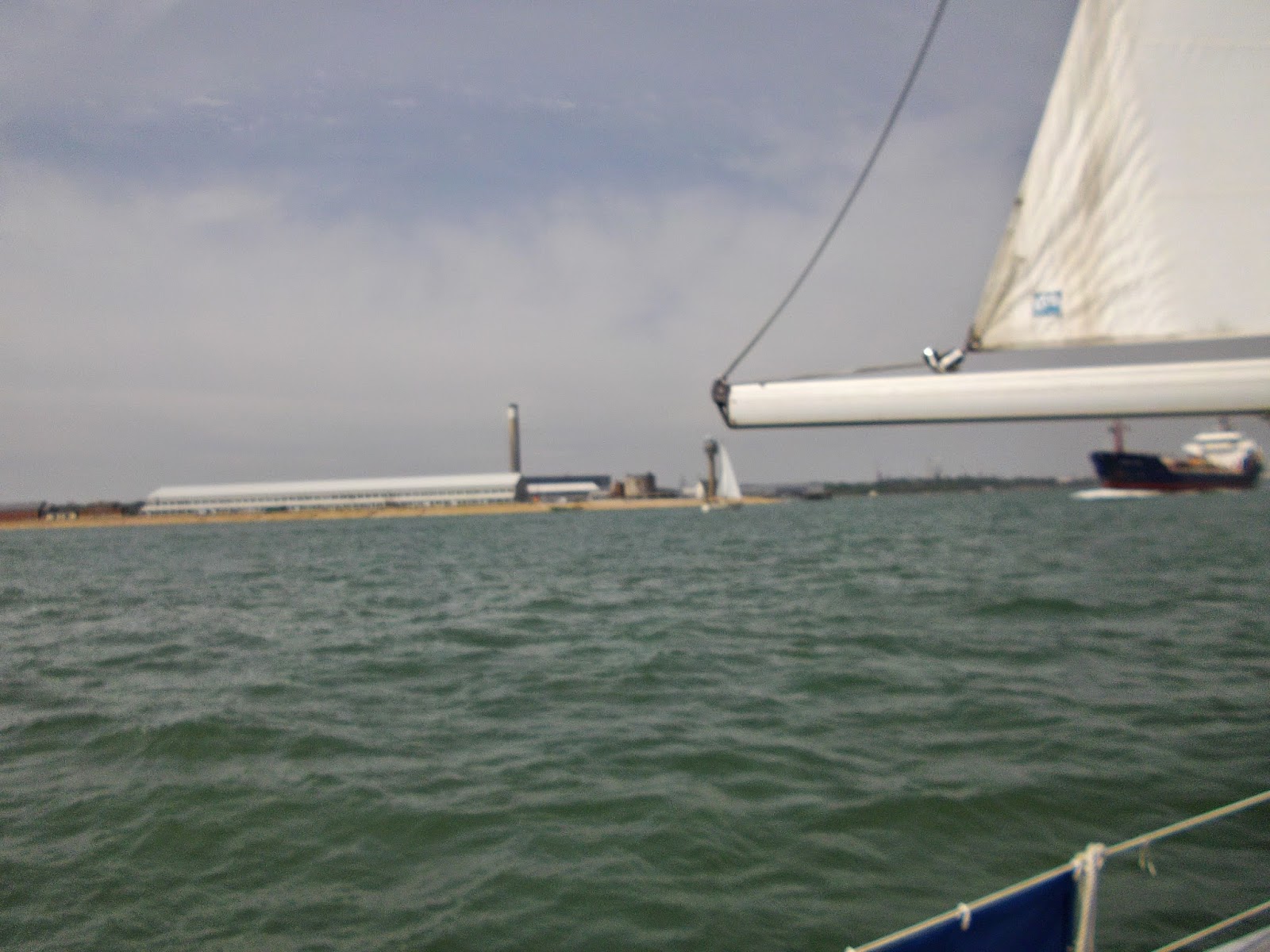 In my youth Calshot Spit was much more interesting.  There was a light ship moored off the spit, very useful for telling the tidal flows and pretty cool looking too.  She now lies at a marina/condo complex in Southampton.  Better yet there was a flying boat attached to the local sports and rec centre, but sadly long since passed.  Anyone know where she went? 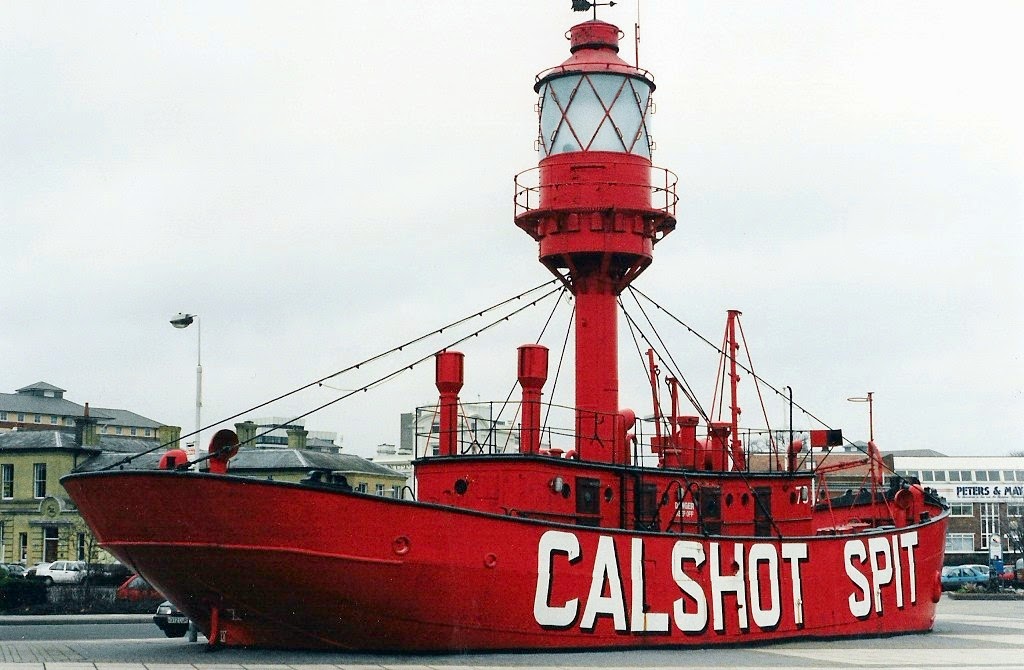 
A few more shots from my cruise with my dad earlier this month. 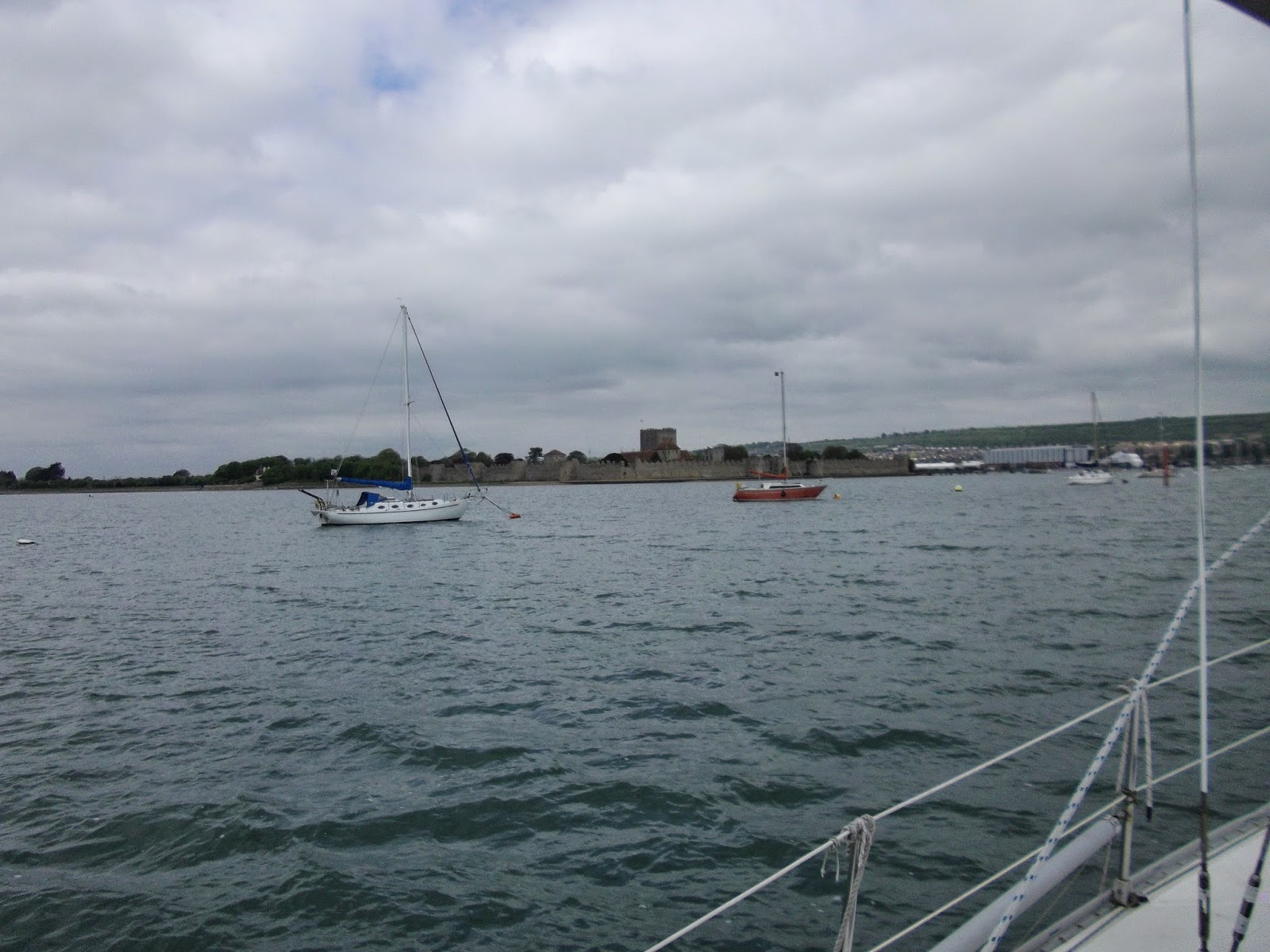 Two shots of Portchester Castle in the gloom on May 3rd, a Norman Castle based on a Roman Saxon Shore fort.  And still looking damn good for her age! And well worth a poke around - again I didn't get there this time but have been twice in the past.  The first time led to one of those great questions from 5 year olds.  "Dad who were the pirates that the Romans built the castle to keep out?"  "Uh, that would be us." 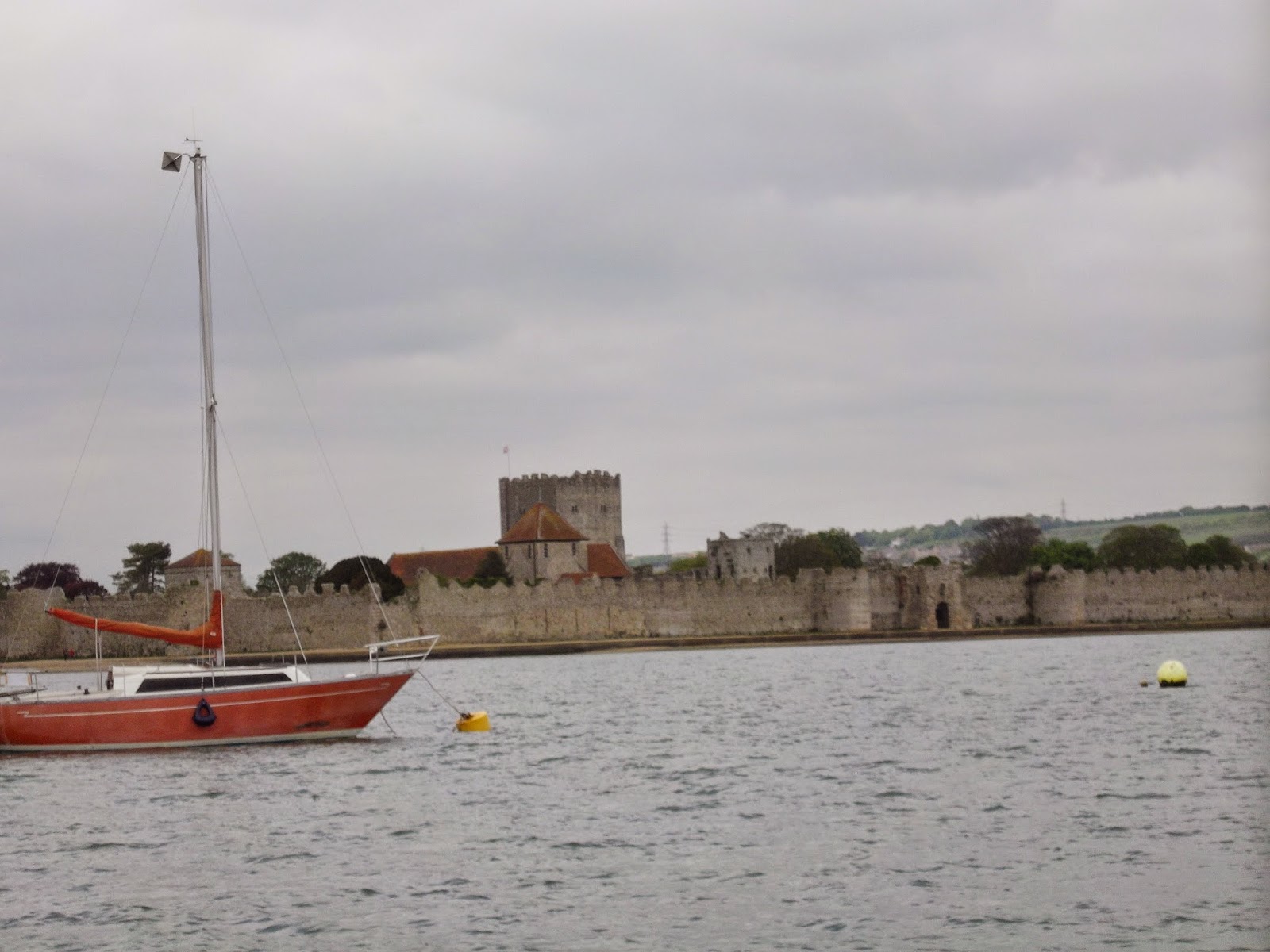 Portchester served as an departure point for many medieval English campaigns in France, most notably Henry V left for Agincourt from Portchester.   Please note that the photographer was not drunk, but was working on a moving platform.  You try taking photos from a 33 ft boat underway.

On Satruday May 3rd, we had bright sunshine and motored from Port Solent to Cowes.  We would have sailed but when we tried to set the Jib on Friday it all went pear shaped and it looked like we had some serious rigging woes to sort out.  FYI in case you hadn't figured it out this was BlogCon day.  While the others were off in York gaming away I was on the briny blue (or grey in this case) spending time with my dad.

No naval history at all here, but I thought this might be of interest.  Given the range of tides at Port Solent, the marina has a lock at the entrance so that the marina can be a constant depth.  This shows six boats ahead of us waiting for the water level to go down so that we can leave the marina.  There was another boat to our starboard and two more astern of us. 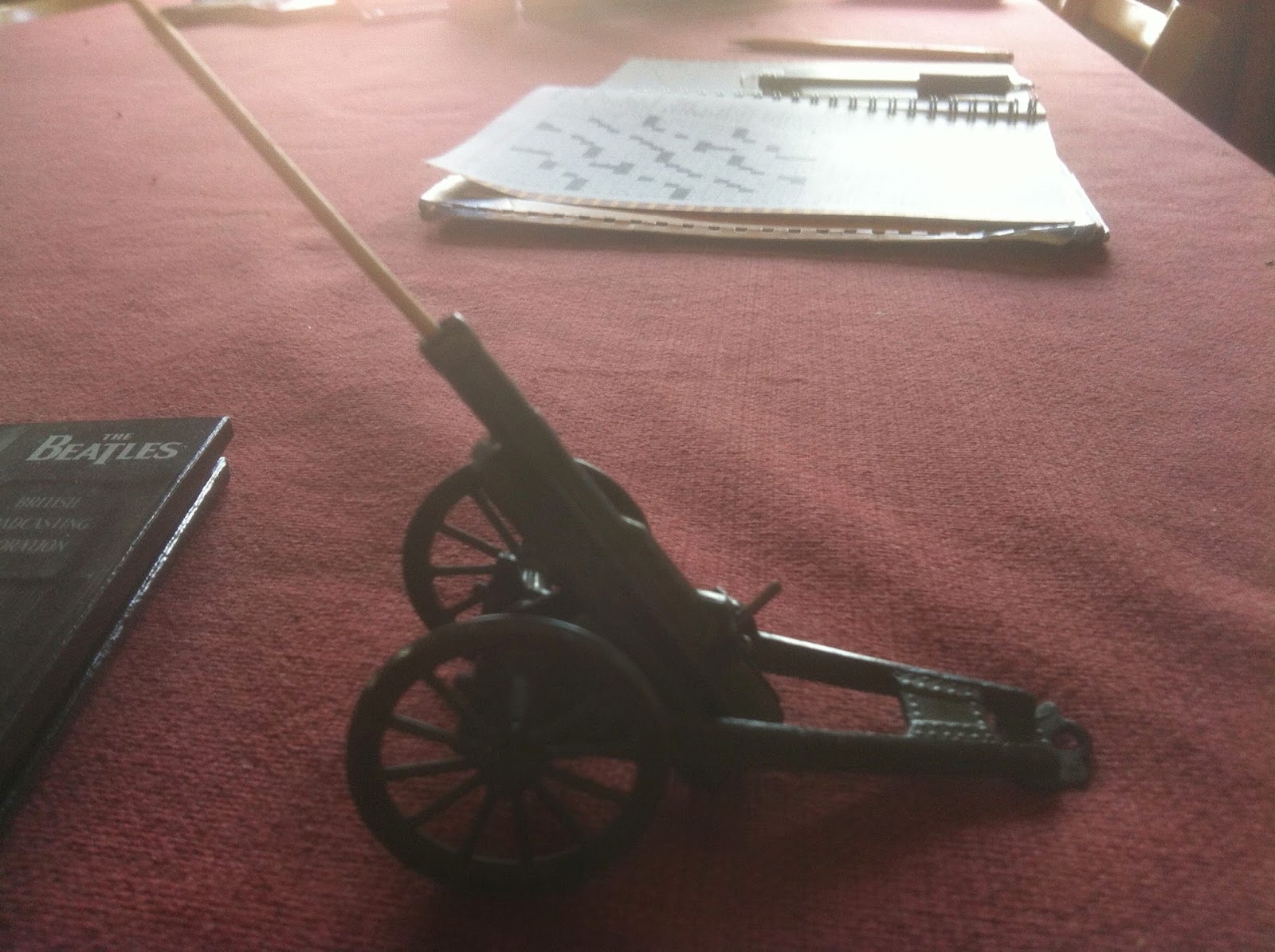 Having put myself under the evil influence of Mr. Gow, I went off to the local antique mall in quest of Britain's cannons yesterday.  The "Antique Mall" is a old warehouse which rents space out to a bunch of antique and collectibles traders.  It's a rabbit warren and Aladin's Cave of display cases full of junk and gems (mostly the former).  The number of "ET" collectibles was notable.  Also SWMBO got a charge out of noting the prices for toys that she recognized from her family's toy boxes.

Anyway I picked up a battered but serviceable firing cannon of unknown origin.  There is a piece missing - the levelling device.  As a result it tilts upwards at a 45 degree angle, unless you substitute a toothpick or similar.  But it does shoot.  Anyone recognize it?  The CD is included as a size reference, and the NYT crossword diary is still a work in progress with this week's puzzle. 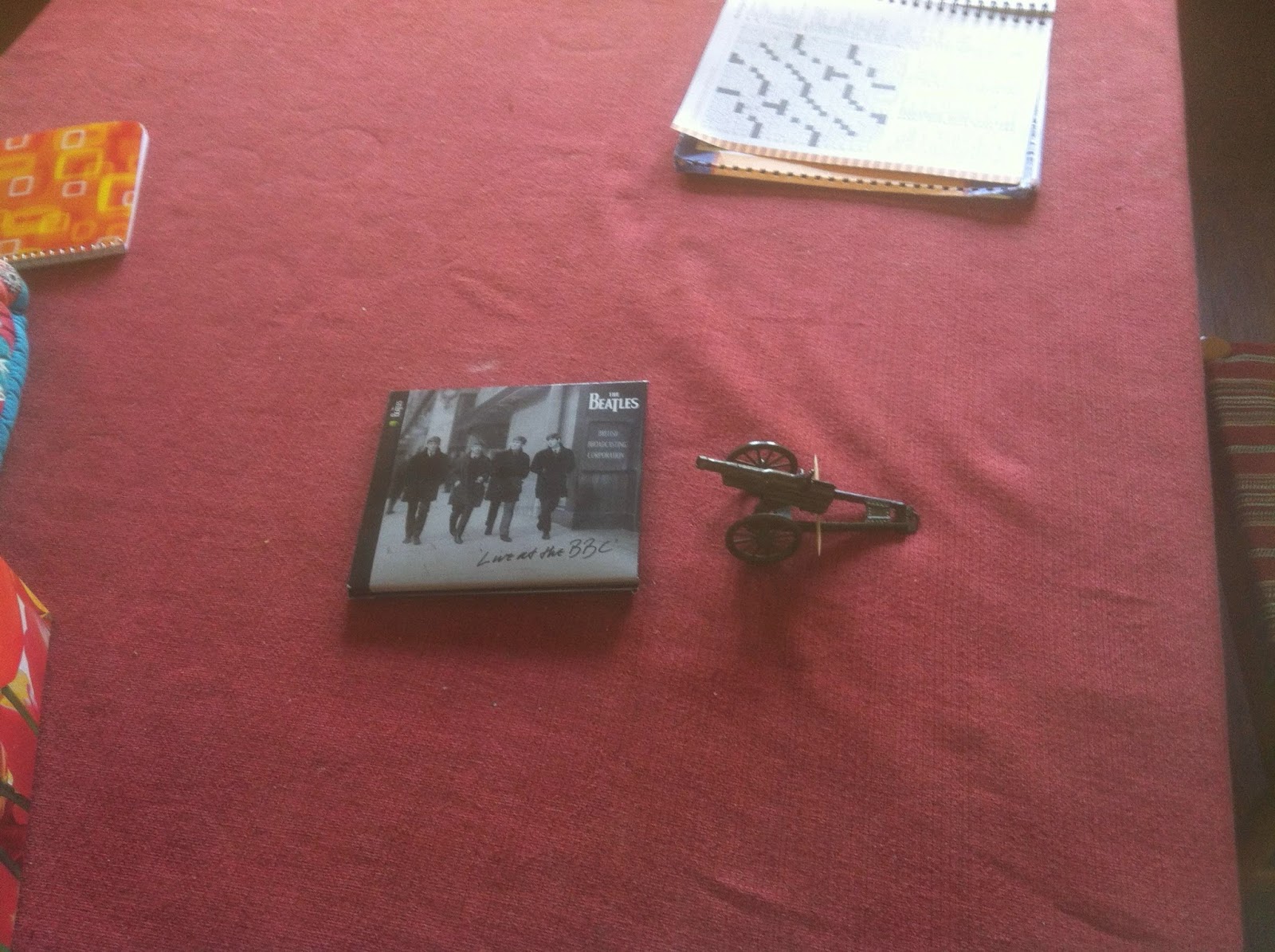 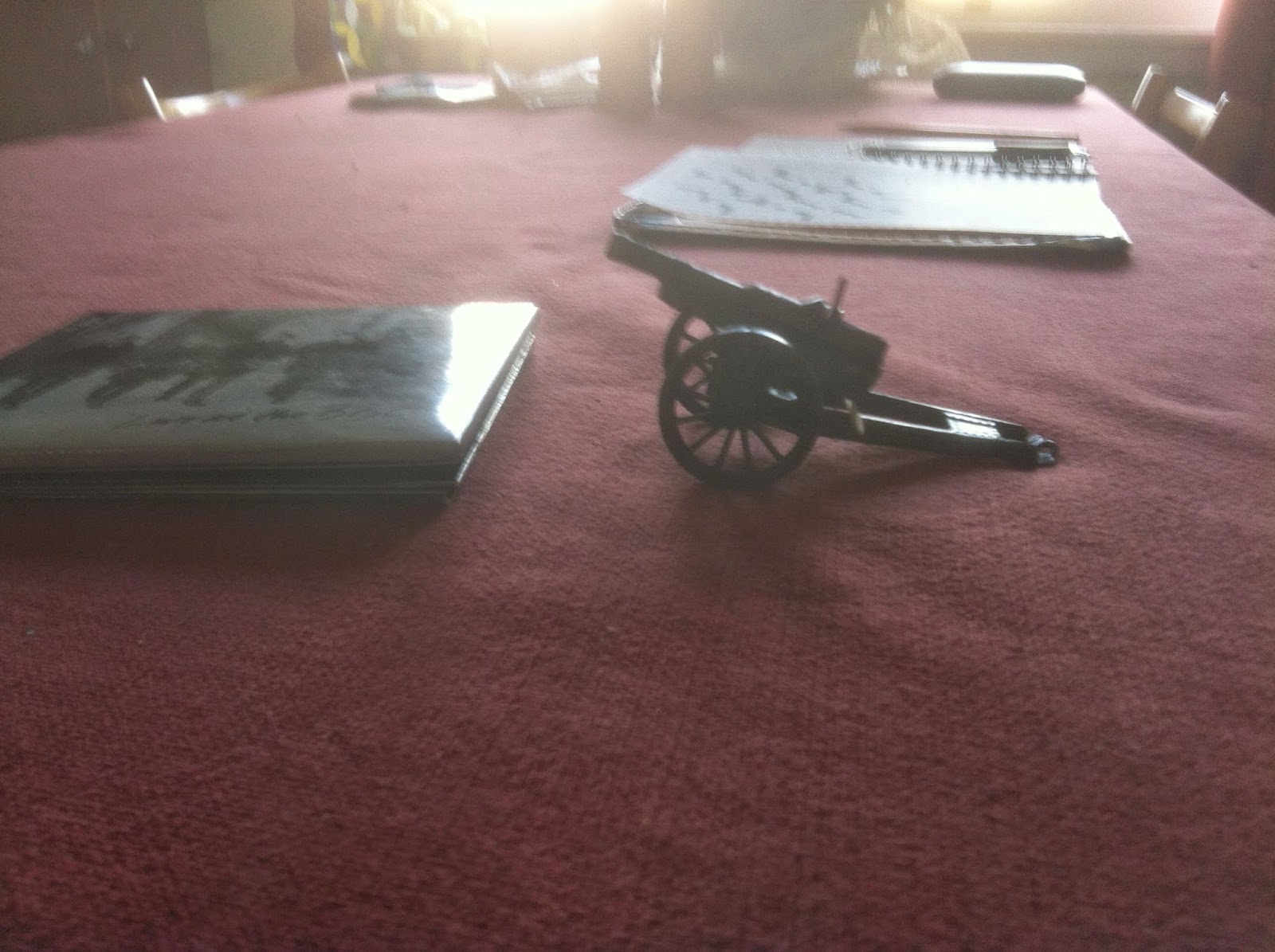 
While in the UK I got together with Tim Gow for a play test of his Little Cold Wars game.  Tim's got better pictures than I over at his site, but here are my pics.


Some more shots from our motor into Portsmouth Harbour earlier in May.


IMHO, the best way to see sites of interest for naval history is on the water.  On May 2nd Dad and I sailed from the Hamble River to Port Solent Marina in Portsmouth Harbour passing about 1600 years (or more) of naval history along the way.

Let's set the geography first.  Dad keeps his boat on the Hamble River in Hampshire, probably the most crowded yacht anchorage in the world as seen below.  It has a long naval history and on its upper reaches lies the wreck of the Grace Dieu (Henry V's flagship) from 1418. 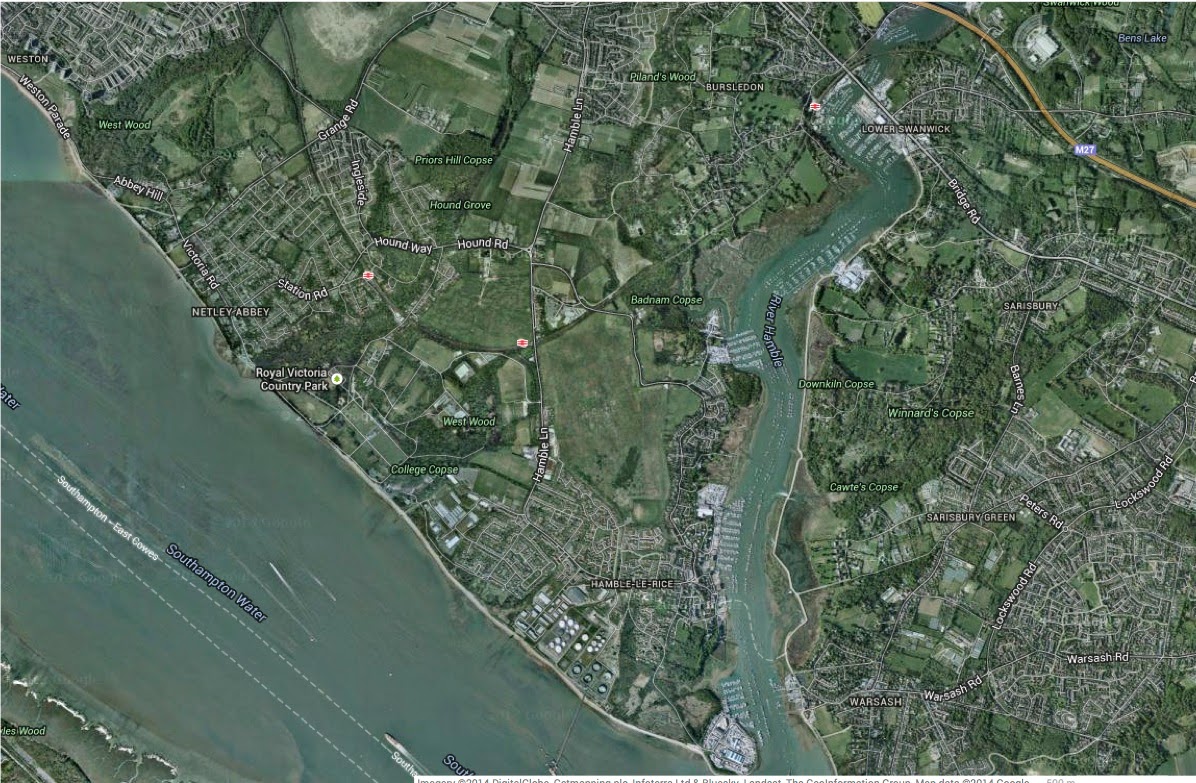 We sailed on May 2nd from the Hamble to Port Solent (blue line), on May 3rd from Port Solent to Cowes on the Isle of Wight (green line) and on the 5th from Cowes back to the Hamble (yellow line).

If you are into your naval history this is essentially ground zero.  Celts, Romans, Saxons, Vikings, Normans, French, Spanish, Dutchmen and Germans have all made their presence felt and their advances mostly rejected.  We sailed through the Spithead anchorage where a young Hornblower got sea sick etc, etc.

Fort Gilkicker dates from the 1860s and was originally armed with RML artillery, updated to breech-loaders prior to WW1.
Fort Monkton (spellings vary on this one) dates from the American War of Independence and was updated in the Victorian age with MLRs and breechloaders.

These forts  date from the 1860s and were built as stationary ironclads!  They were armed with MLRs, then BLs and even used as AA platforms in WW2.  This is quite close to where the Mary Rose sank in 1545!

Visiting a Green and Pleasant Land


II just came back from a 10 day trip to the UK to visit my dad (who I had not seen for 4 years).  More details to follow as I sort my brain and photos out but highlights include

I had originally hoped to get together with more gaming contacts but it was a short trip and dad wanted to get as much time on the boat as possible.  Sorry lads, but he's family, has a boat and I don't get much time on the briny blue.  Hopefully next time around.

Normally it's Moose who are the problems…..
Angry beaver delays traffic, roams around miramichi
Posted by Peter Douglas at 10:31 AM 3 comments: