It continues to be a bit of a slow slog on the painting desk, but there is progress and I finally got these guys finished this week.  Hopefully, life will return to the normal level of chaos and I can get some more painting time in over the next month. 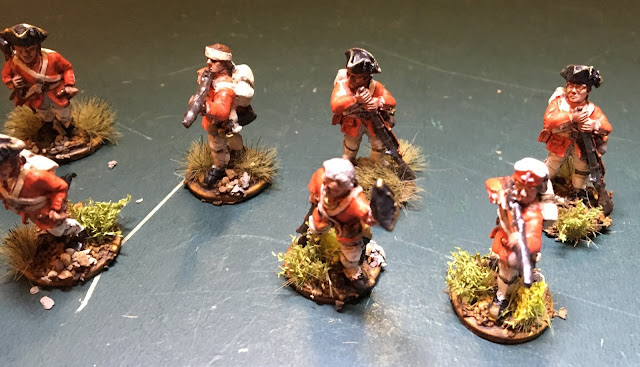 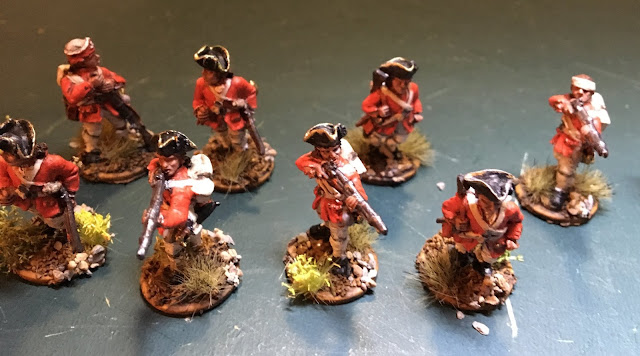 In my earlier post I described how Volontaires de l'Armee were ad hoc units formed on campaign from regular infantry regiments and used as light infantry.  More details on these units can be at Kronoskaf.  I've used Front Rank French Regulars from their FIW range, as I think the stripped down uniform works well for these units, plus it gives them a distinctive look compared to formed battalions.  These guys have taken off their coats, showing their sleeved waistcoats.  Some hats have been replaced with forage caps or bandages, and they have added a hatchet to their kit. 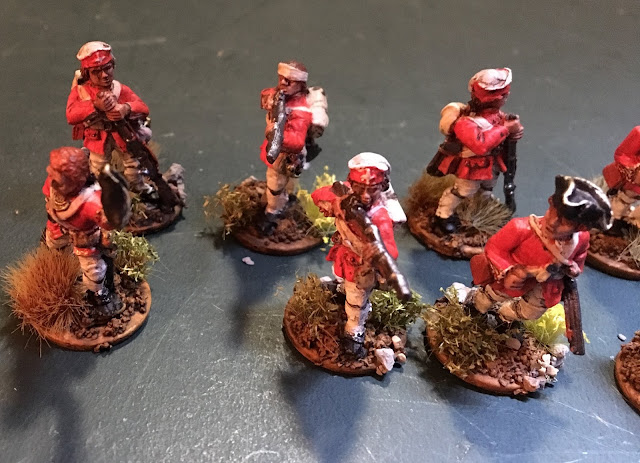 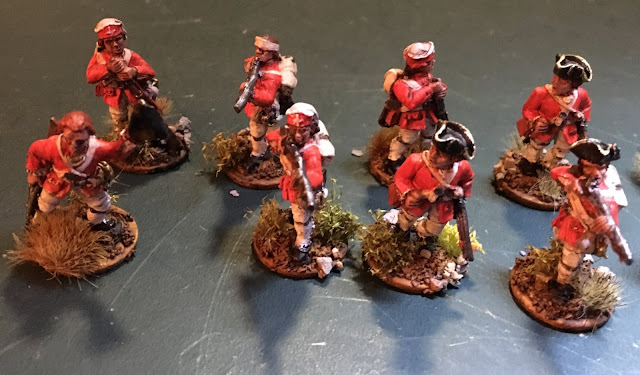 I quite like these FR figures, and there's a lot more variety of poses in their FIW range compared to the SYW range.  They painted up nicely and I'm pretty happy with the results. They will do well for Kliene Krieg actions with Sharp Pracice or larger actions using BP/HoW.  Now I just need to find those skirmish sabots I got from Warbases earlier this year...I know I put them away carefully.

On the Workbench Volontaires de l'armée

Having let the blog go dormant for waaaaay too long earlier this year I will be trying to keep up with it better this fall.  It's been two weeks since my last post, so figured I'd better get back with it. 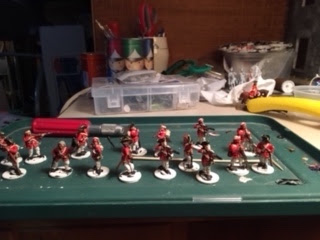 I had hoped to go with these lads once they were finished, but real life kind of got in my way.  There fore I'll go with what's currently on the workbench.  This is a mostly finished unit of Volontaires de l'armée, French Light Infantry for my Seven Years War project. 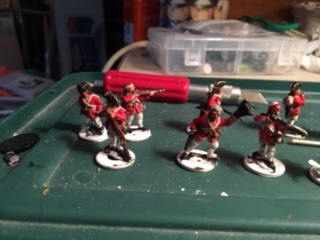 The French army of the period formed a lot of irregular light infantry units, like the Chasseurs de Fischer, some being very god and others not so much.  They also formed ad-hoc groups of Voluntaires to perform similar tasks, the units being formed by detachments of soldiers "volontaired" from parent regiments.  The officers certainly did volunteer for these units as they gave ambitious young men lacking social standing a chance to shine, I suspect they just hand picked the men from their own companies.  Typically the ad hoc units were named after the commanding officer.  later in the SYW, several regiments formed more permanent chasseur companies to perform similar roles, which would eventually lead to the Voltigeur companies familiar to Napoleonic gamers. 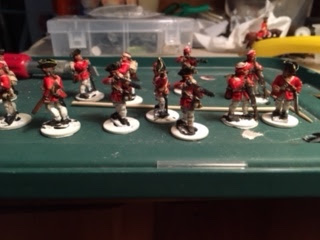 I've painted this lot of 18 as members of the Orleans regiment, although they could be from any one of several regiments with the identical regimentals.  The figures are Front Rank from their FIW range, and are depicted in campaign dress.  They have removed their coats and operated in sleeved red waistcoats and have modified their kit to suit an independent role.  I figure that they will do very well as a unit of light infantry on table.

Still to be finished are touch ups and details on the face and hands, adding brass buttons and basework.