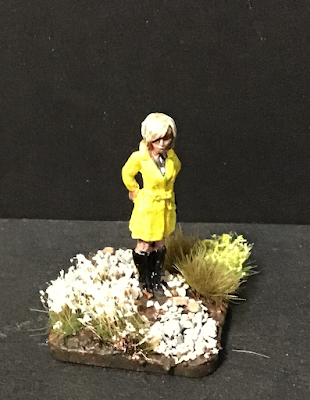 A 28mm figure of a Femme Fatale for my second balloon ride of the Challenge, this one taking me to the summit of the Snowlord.  Like many challengers the ability to make use of the balloon had me scrambling through the lead pile for suitable female figures.  (I also hit the e-commerce route for some figures that were ordered in 2019 but just arrived this week.)  This figure is a 28mm Reaper Bones figure bought on spec for the Hero Theme Round a few Challenges back.  The plan was to have something mid cold war themed in front of the Berlin Wall and word smithed to fit Bowie's Heroes.  But that project got sidelined by a case of the February's and she's sat in the lead pile ever since.

Anyway for a Reaper Bones figure, quality was pretty good and she painted up nicely.  There was a small mold line that came off easily and those slender legs don't give her much support and she bent over with too much pressure on the brush but that was easily handled.  I've painted her up as a generic Femme Fatale for cold war pulp stories using as my muse....
I've never seen the film, it's supposed to be good, but I can fanboy over la belle Deneuve all day long.  I have been to Cherbourg twice on sailing expeditions with my dad.  It's a typical port city with not much to offer it, but it's in France and there's some interesting harbour fortifications on the breakwaters. 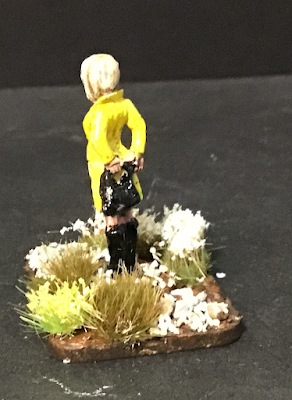 No bonus points on this one, it's my second balloon ride and we've been drinking Italian reds to go with some mighty fine stripling steaks recently.  But's she's my balloon ride ticket to the Summit and what ever the Snowlord has in store for me.

Next stop on my tour of Challenge Island is Millsy's Millpond. 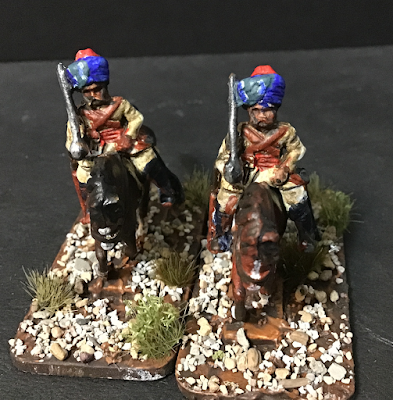 This challenge location (paint a mini dating to the 20th century) was both easy and difficult for me.  Easy because I had lots of figures dating back to the 80s and hard because I had to choose only 1!  In the end I opted for two figures that I acquired at the very end of the 1990s foregoing extra points for figures that I actually wanted to paint. 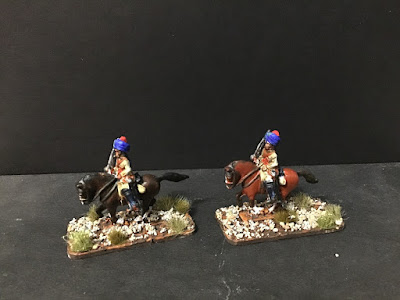 I have two 25mm cavalrymen from Minifigs Colonial range representing members of the 10th Bengal Lancers (Hodgson's Horse) on the North-West Frontier.  Like most current regiments in the Indian Army, the regiment was raised during the Indian Mutiny (or First War of Independence) and is still in existence as one of the armoured regiments in the modern Indian Army. I base my painting on the figure on the cover of the classic Osprey (I obtained my copy used in 1991 in Ottawa). 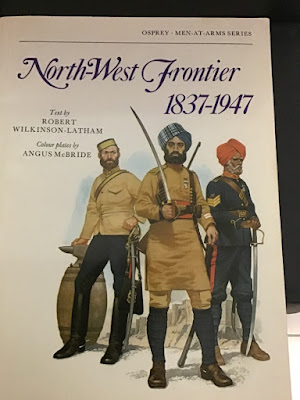 The figures have all the classic minifig's attributes - stiff toy solder pose, limited detail but a lot of simple elegance.  And like all minifigs they take a coat of paint nicely if treated with proper respect.  I used figures with swords as the lance armed figures in the lead pile suffered from droopy-lance and I wasn't in a converting mood.  I kept the paint job fairly toy soldier simple but tried to make basing that looked suitable for the Khyber and similar locales. 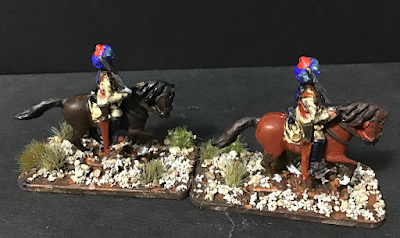 Like many a tail from the the North West Frontier the details are a little hazy on the back story on the figures, but here goes.  I think that I acquired these circa 1999 and most certainly was gifted them by my old gaming pal Ross MacFarland owner of the Battle Game of the Month blog.  I relocated from my native Halifax, Nova Scotia to Regina, Saskatchewan in February 1998 (long story suffice to say that I've always believed that if your going to C*ck up your life, do a thorough job of it).  I know that I started my Wascanastan project immediately on arrival, inspired by Ross' With MacDuff to the Frontier Rules and project.  If you were poking around the inter web circa 1999 you may remember my AARs posted under the guise of the Peshawar Gazette on Ross' older blog.  By that time Ross was making the transition upwards to 54mm scales and gifted me a variety of wonders from his lead pile, I think this took place about 1999 during a trip home.  I don't know when Ross got these figures but certainly no later than the mid 90s and possibly much earlier.  You never can tell with Minifigs, indeed the same figures are still available today from Caliver Books. 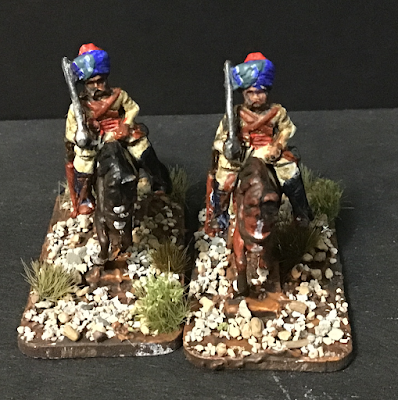 There are also two family connections to the NW Frontier and the Bengal Lancers.  The first is that my Great Grandfather was an officer in the Northamptonshire Regiment and served in the Tirah Campaign of 1897.  My dad has great grand dad's medal from the campaign and my grandmother was born in India while great granddad was posted there.  The second is that my mother was a member of the Halifax Junior Bengal Lancers, a Nova Scotian youth horse group.  In 1949 she was part of the group that performed a Musical Ride at the Canadian National Exhibition in getting very good reviews in the Toronto press.  I have seen photos of 16 year old mum mounted and lance armed in Tunic and Topi but could not find a copy.   She did cut quite a figure.
Points wise that 2 25mm cavalry men at 10 points each plus the 30 points for the Challenge Location.  I will leave it to the minion du jour to judge the points worthiness of the "this is how I got the figures" and "mum was a Bengal Lancer" stories. 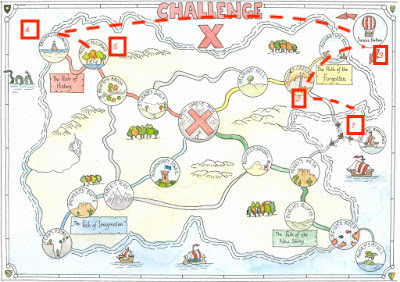 That makes my fifth Challenge Location and my fifth merit badge, so I'll be booking a balloon ride to the Snowlord's Summitt shortly. 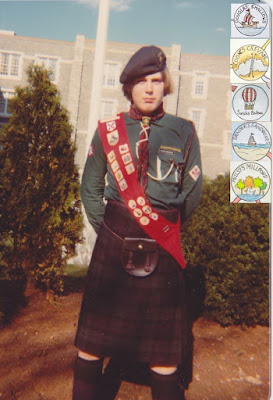 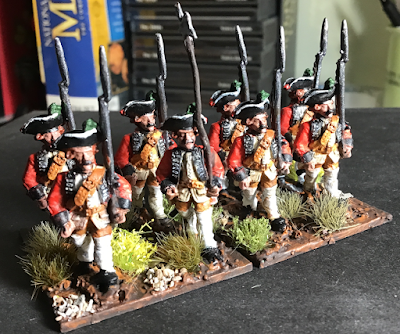 So far my posts have been mostly focused on my odd little naval projects plus other odds and sods.  This time a round I am returning to the project that occupied almost my entire Challenge IX the Seven Years' War.

For Sander's Sand Dunes the requirement is RED and it think that these 8 Hanoverian infantry men fit the bill.  These guys are from Hanoverian Battalion 4B known by the inhaber's name, which was Marschalk until the end of 1760 and Crashaur after that.  I tend to complete these units in three batches of eight, and this is the third batch stated but the second completed for the regiment.  Batch 1 was posted late in AHPC IX.  Batch 2 was primed in time for that Challenge and started over the summer but languished about 75% done by the start of this year's affair.  Hopefully I'll get them finished once this year's madness is over.

Once again these are 28mm Front Rank SYW figures and very nice to paint up. 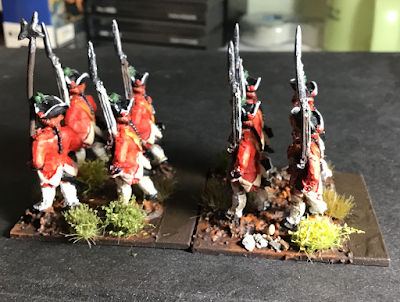 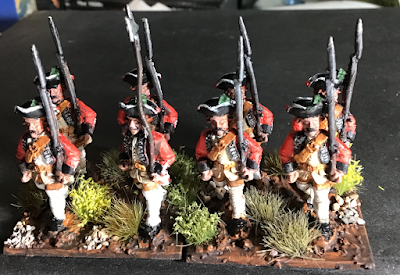 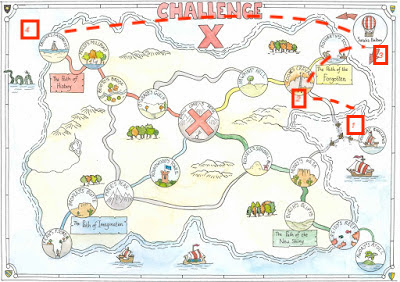 And my scout badge collection... 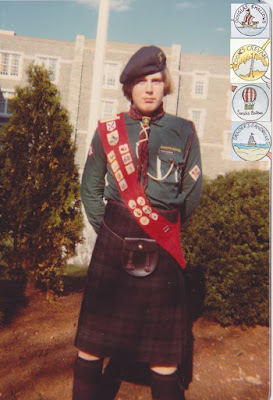 More War of the Pacific Ships

Another set of 1/2400 ships from Tumbling Dice for my War of the Pacific project.  As obscure as this war is I've found a small community of bloggers indulging in the same project.


First up is the last of the Peruvian ironclads, the monitors Manco Cápac and Atahualpa (those Inca names are tough to spell).  These were ex-USN Canonicus class single turreted monitors which were built too late to see service in the ACW.    They were sold to the Peruvians, fitted with fore and aft sailing rigs and minimal superstructure and relocated south and around the Cape Horn (this being before the Panama Canal).   Must have been one hell of a rough journey given the low freeboard.


Once in Peruvian waters they were used for coastal defence and fought the Chilean fleet  in the final phases, including a duel with the Huascar after her capture, but were eventually scuttled to prevent capture.


The models are admittedly complete bodges.  TD doesn't make a Canonicus class monitor so I used a pack of the USS Monitor model, which was 20% shorter than these ships but it was the closest available.  I added the rig from spare fore and aft sails from one or the other TD packs of ships.  My best guess is that they came from the two Cochrane class ironclads, which I modelled mostly unrigged as they removed as much rigging as possible during a mid-war refit.  The final models are nowhere nearly being replicas of the two ships.  But they look like Civil War monitors with rigging and rudimentary superstructure attached, which is exactly what they need to look like.  If any one cars to model exact replicas Spithead miniatures makes them in 1:1200.  i didn't go that route as I like the cost and space effectiveness of 1/2400 and couldn't figure out how to order anything from Spithead.


Next up is a squadron of Chilean unarmoured ships, or Cruising ships in the Victorian vernacular.  There's no specific models for these in the TD range, so I sued whatever models looked about right based on period photos, rough dimensions available and models on hand.  We have the corvettes O'Higgins, Chacabuco and Mallaganes, all of which had an active part in the war.

Last of all  is  the schooner Covadonga which had a history rivalling the Huascar's.  originally Spanish, she was captured by the Esmeralda (still on the work bench) and brought into Chilean service.  She had a key role in the Battle of Punta Gruesa where she outgunned the Peruvian ironclad Independencia,  who then ran aground and was lost.  Covadonga was sunk later in the war while on blockade duty by a rowboat rigged as a floating mine.

Points wise that's six 1/2400 ships for a whopping 18 points.  Finally I'll leave you with the following video.  My wife and I are huge fans of Carol Burnett and I can't say the name O'Higgins (Higgins or Wiggins) without releasing my inner Mr. Tudball.