Continuing on from my previous post, Curt's Milanese had attempted to barrel straight into the village without bothering to form up first and had gotten themselves spread out as a result.  Sylvain's French had opted to deploy first and the attendant delays meant that Curt was able to get his leading troops into the village in good time.

The next few command rolls essentially decided the day.  After some ummmm... cautious deployment and backstopping, Sylvain tried to charge his Archers at the Swordsmen.  The command roll only let them make one move and thus left them in the open between the lines.  Curt in his turn charged the Archers with his Gendarmes, easily rolling enough to contact.  The heavier cavalry won out, pushing the Archers back and then breaking them with their Sweeping advance.


In the meantime, Sylvain tried missile fire with his cannon and two crossbow units (which outranged Curt's arquebusiers).  The cannon was ineffective but the Crossbows managed to disorder the Swiss, requiring them to halt and redress ranks for a turn.  Curt but his missile troops into the village, including his mounted crossbows since he feared they would be fast versus the heavier French cavalry.  I let Curt dismount, which was contrary to the rules but suited my interpretation.  I may look at treating these troops like ECW dragoons in the future.

With the Halberdiers halted, Curt charged a unit of swordsmen into the pike block who had now formed up in hedgehog.  Meanwhile the Milanese Gendarmes bypassed the infantry and charged into the flank of the French Gendarmes.  The French were able to turn to face but not able to countercharge.


That is pretty much it. Sylvain had lost 3 of his 6 infantry and cavalry units, and had 1 of his 2 battalias broken.  The remaining French men retreated back home while the Milanese tested the local Chianti.
Posted by Peter Douglas at 4:05 PM 2 comments:

Last Friday night Curt hosted and I GMed a miniatures games featuring an old friend and new enemies.  The old friend was a scenario that has been likely fought more often than almost any other (the scenario in the original Featherstone's Wargames likely exceeds it).  It was the Battle of Sawmill Village (OK Chance Encounter) from the first CS Grant Scenario Book. 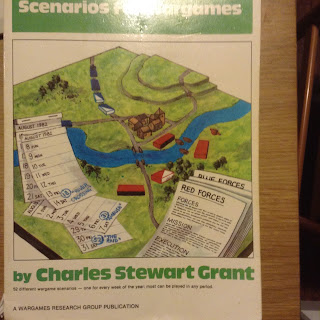 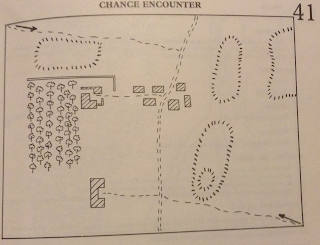 The new foes were my early Italian Wars French and Northern Italian (Milanese on the night) armies circa 1496 using 28mm Perry figures.  The scenario calls for two equal points value advanced guards arriving from the North West (Milanese) and South East (French corners).  OK that's backwards Geographically but fits the layout of the book's map and our table.  We can rotate the orientation 180 degrees or assume that the French are on their pox-ravaged way back from Naples.


To face them, Sylvain's French fielded


From the starting gun the two players had different plans.  Curt put his three foot with melee weapons in one Battalia and his mounted and shot troops in the other.  He also went straight for the village without deploying and allowing gaps to appear between units.  Sylvain put his units into two similar Battalia, each with a pike, bow and cavalry unit.  The first Battalia in his column had the Archers and gun, while the second had the Gendarmes.  Sylvain also chose to move south of the village and deploy fully before adding.  Even then his infantry were cautious (partly due to poor command rolls) and he seemed to favour using his firepower before closing on the Milanese.


This was our first time using Pike & Shotte and I have to say that they worked well.  The variable move system (it's like Marmite) worked very well IMHO, as each side had moments when they seemed to be ahead in the race only to have the opponents catch up.  Also, it drove one the pros and cons of moving at the slowest speed to keep a line intact vs moving at one's best speed and having gaps appear.