It being summer I get my my regular exercise swimming laps in my local outdoor public pool.  I show up when it opens at 8am with a bunch of older and grumpier old farts and then head off to what ever office I'm haunting for the rest of the day.  This morning while getting my cardio in under clear blue Prairie skies I did some pondering about the recent game that I GM'd.  There were two problems encountered - slow deployment times and too much disruption - under the Pike and Shotte/Black Powder/Hail Caesar system.  Here's what my oxygen starved brain came up with.

Slow Deployment From Column of March
The issue here is that for the scenario I wanted to have the attacked deal with the issue of entering on in column of match and deploying on the go.  But with basic P&S movement rates this becomes a slow process, especially when the columns have to deploy.

In this particular scenario had I let the attackers come on deployed they likely would have rolled over the defenders.  I also have issues with too perfect deployments when historically sub commands showed up early, late or in the wrong place on occasion. So incorporating some ideas filched from Sam Mustafa's Blucher rules, here's how I would approach this scenario next time under P&S/BP/HC.


The same thing could be used with reinforcements arriving from off table, where the entry point is some distance away from the enemy.-

Too Many Disorders
Under the P&S/BP/HC any natural 6s on shooting cause a disorder, preventing the target unit from doing anything in their next move.  This seems to cause the attacker's a undue hardship in the recent game - Stacey rolled many 6s leaving the attackers effectively pinned in a fire zone at times.  I am thinking of letting the target unit taking an immediate save roll against disorder once all the shooting on the unit is completed.  This lets better troops more likely to shrug off disorder while inferior troops will be more likely to be disordered.  I think that there may be two exceptions when no save roll is permitted.  First, any units charging into contact are auto-disorder by fire.  Second, any unit taking two or more disorder results in shooting are also auto disordered.

Any that's what my brain came up to this morning, we'll see what a night's sleep does with these ideas.


This Friday I GM'd an Italian Wars game at Curt's using Pike and Shotte.  Curt's Imperialists were tasked with clearing a pass defended by my Italian forces.  The Scenario was "Pass Clearance" from CS Grant's "Programmed War-games Scenarios".  Followers of Curt's AHPC blog will recognize many of the units from the past 3 challenges.  Curt and Jeremy took the attackers and Stacy the defenders, although he offered me the command of his reserve which I gladly took.


In the end the game was a bit of a disappointment, due to a combination of bad dice rolling and poor GMing on my part.   However it made good eye candy.


I'll own up to the first game issue.  I like the Table Top Teaser games especially when they include pre contact manoeuvre and wanted to get this on table so had the attackers enter in column of units from the board edge.  With the P&S command rolls movement is variable.  Curt and Jeremy managed a lot of "one move only rolls" which meant the pike columns plodded forward 6" per turn making for a loooong approach march.  Given the inflexible nature of these armies it would have been better to let them deploy on table or at least enter deployed.  But a couple of good rolls would have had the pike behemoths on top of the defenders and a very quick attacker victory.  In the end I'll chalk this up to a mix of rules quirks, bad dice and GM incompetence.

Shooting and especially disorder caused by shooting was another source of table top friction.  My Italian army is very shot heavy and their close fighting infantry is easy pickings for Swiss pikes.  Stacey had very,very good dice rolls consistently getting one or more hits plus disorder on two dice (in P&S 4+ causes a hit, 6 causes disorder).  With the slow approach slog and good shooting rolls, the casualties mounted quickly.  Worse still the disorder results stopped units in their tracks and prevent movement for a whole turn making the approach march even slower and giving the defenders more shots!  This was particularly a problem when the head of the column took the disorder. 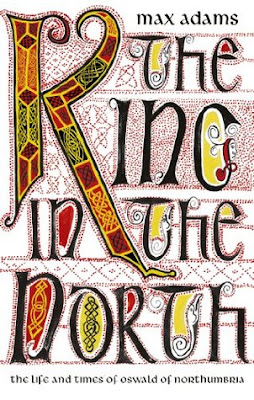 I picked this up in Waterstone's in Chichester.  It's a mark of how busy our trip was that we were in the UK for 18 days before setting foot in a bookshop!  Excellent stuff and tons of source material for gaming.  Grab your cup of mead and get ready for an adventure.

The cast of characters is truly epic.  Saints galore - Columba, Wilfrid, Cuthbert and plus Oswald himself.  Panda of Mercia and Sutton Hoo man himself also appear on the pages, and the Venerable Bede is a key source.  We're talking wild and wooly stories in the gray area between history and myth, the ear that inspired Tolkien.

There's source material for a fantasy series, an epic RPG campaign,  or wargaming on multiple scale -  Dux Brittarium, SAGA, Hail Caesar or old school WRG.  Speaking of WRG, if your recall Phil Barker's throw away comments in many of the dark age army lists - many of these occur in this story.
Posted by Peter Douglas at 8:36 AM 2 comments: 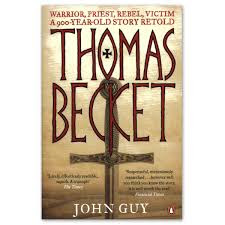 I picked this up at the Canterbury Cathedral shop.  Excellent read and food for thought with lots of gaming possibilities.  Ok knights hacking down un armed clergy doesn't make a great war-game, but the back story sure has possibilities!

The cast of characters is larger than life St Thomas, Henry II, Eleanor of Aquitaine.  It really calls out for Hollywood epics staring Richard Burton, Peter O'Toole and Katherine Hepburn (oh wait, they did that).  The author gives really good coverage of the 12th century - the reign of Henry I, the tragedy of the White Ship, the civil wars of Stephen and Matilda and then the Angevin empire.  The Cliff Notes histories focus on Becket the Archbishop and Martyr but he was much more before that.  Plus there's lots of potential for medieval warfare on both small and large scales.

Posted by Peter Douglas at 7:48 AM No comments:

Back From the UK and Back on The Blog

I hadn't realized until this morning but I'd been silent on the blogosphere since the end of April.  It's been a busy summer but in a good way.  Ive been traveling a lot - Halifax NS, Portland OR, Toronto and then the UK- and am looking forward to a few weeks at home before the start of the fall semester.

Our most recent travels were to the UK for three weeks.  We joke about this trip being the world's most expensive cheap beach vacation.  Every year my dad, step mother and step siblings plus kids and hangers on spend a week in caravans at the Isle of Wight in August - an inexpensive week away for a Briton.  But throw in three transatlantic flights at high season, a stay in London (because if we're going to the UK...), meals out and a rental car - ouch!  My wife, daughter and I used to go every second year but it had been 8 years since the last trip - looking at the credit card statements and I know why!

The trip was family centred so little of gaming note to report.  I think about trying to link up with British blogging/gaming contacts but didn't get my act in gear this year.  Highlights of the trip include.