More photos from my game with Miles.


I really enjoyed the GDA system and hope to play more games with it.  I like the uncertainty of the brigade activation, which hampered my assault on the monastery several turns running.  However, I sometimes wonder if our little tin brigadiers know better than I do.  A full all assault might have worked but at cost, while the slow but steady attrition definitely worked.
Posted by Peter Douglas at 8:56 AM 10 comments:

I Have Been to the Lair of the UberGeek


Last weekend I was onsite at the Lair of the UberGeek, Mile Reidy.  Miles and his wife were great hosts and not serial killers as previously advertised.  However, I did make the mistake of jokingly asking where the guns were kept and finding out!

A major highlight was being let downstairs into Miles gaming room, and more important being let back upstairs in reasonably alive condition.   It was great to see Miles' huge gaming collection including his hand crafted Monitor and Merrimack models.

We played a game of General d'Armee, my second game using this rule set and I really like what I've seen so far.  I see a SYW conversion of these in my future.  We used Miles 15mm Peninsula war figures.  I used to game with my own collections of 15s a lot, but sold them off over the years to do 28s.  I see the advantages but still prefer the heft of the bigger figures, plus my eyes are not what they were 20 odd years ago.  It was a scenario where the French (me) were trying to take a defended monastery held by the Brits and Spanish.  I had 3 infantry brigades on table plus a cavalry brigade off table to my left.  Miles had 2 infantry brigades on table, plus cavalry and infantry brigades off table to my left.

We had a good game, with a lot of back and forth swings of momentum and a French victory much to my surprise.  Highlights of the AAR as follows.

A Visit With the Uber Geek

Last week my academic travels took me south of the border to Baltimore, and the lair of the Uber Geek Miles Ready.  I always enjoy my trips south of the 49th parallel safety line, America would be a fine country if it wasn't for all of the Republicans (maybe the administration can build a wall of something to keep them out).

Highlights of my trip included 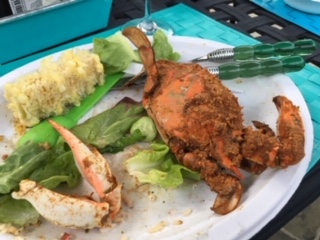 Apparently this was a test weekend as Ed and I were the first gamers to stay overnight while MaryBeth was on site - always a stressful event.  We seemed to have passed the test, being judged as "not nearly as creepy as I expected".  I guess I'll have to try to be more creepy next time.  Of course, if Miles gamer friends are so sketchy that I was considered a safe bet, that's his look out.
Posted by Peter Douglas at 8:04 AM 5 comments: