Here's the final shot of everything I got painted except for my Curtgeld, now in transit via Sylvain to Curt. 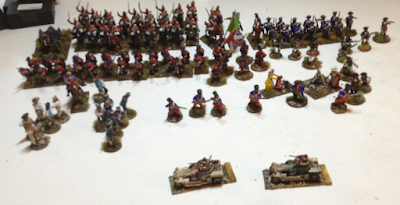 With the exceptions of the two 15mm A/Cs upfront everything was in 28mm, and except for the A/Cs and my Curtgeld everything was for my SYW Sharp Practice project using figures from the Perry Miniatures AWI range.   The output was as follows:

Enough for a good SP force based on the Highlanders and Light Dragoons, plus support options, ready to fight the Kleine Krieg in the Rhineland.  And a few additions to my French force to oppose them.


If my math is correct that's 80 foot figures (83 including the Breda crew in the Curtgeld), 23 mounted figures plus a horse and wagon.  Plus a 28mm weapon and two 15mm vehicles.

I fell 40 points short of my 800 point target, but that's OK.  My big goal was to get the Highlanders and Dragoons done plus SYW chrome add-ons, and that's what I got done.  Next year, I need to fluff up my French armies on the Rhine .  Maybe I can convince Curt to sell me his Minden figures....