'Curt's Analogue Hobbies painting Challenge had one of it's theme bonus rounds due on Saturday, and I got my sh*t together and offered up these guys as my submission.  And darn it wouldn't you know that AlanD submitted the same figures.  I feel the socialite who has turned up at the fancy ball to find someone else in the same dress! 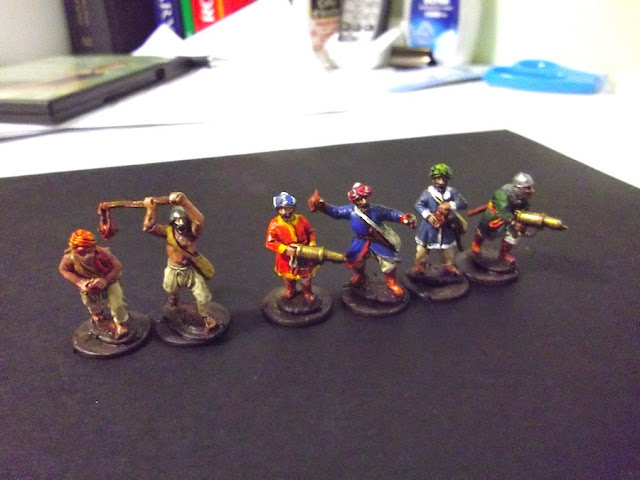 For the hot round I have a set of 6 Andalusian Naffatah 'Fire troops' in 28mm using figures from the Perry Crusades range.  These are very nice figures and ones I had wanted for a while, so I was happy that the Hot round gave me a rationale for acquiring them.  They were painted with my normal artist acrylics with heavy use of washes.  They have been based simply on washers for now, but I will likely revisit the basing later. 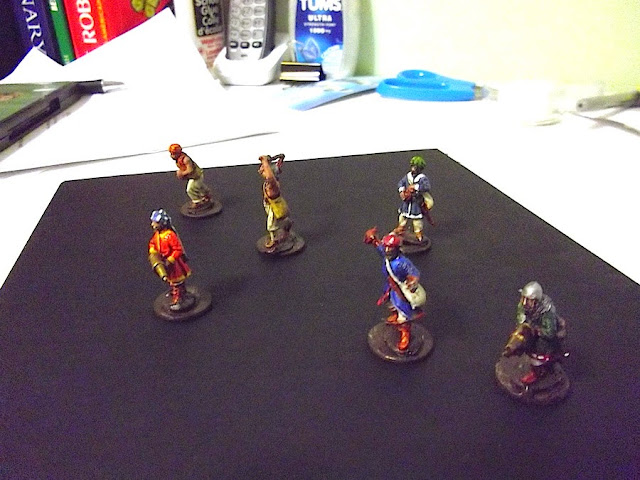 Naft was the Arabic equivalent of Greek Fire, and was delivered by a number of different ways.  Four of these figures hurl ceramic grenades while two use hand held syphons or flame throwers if you will.  WAB classified these trops Naft is "Nasty, sticky, flaming goop" (NSFG) which I think sums things up nicely.  I have another set of 6 Naffatah using Gripping Beast figures but much prefer the Perry figures, or maybe it's my paint job is better on these ones. 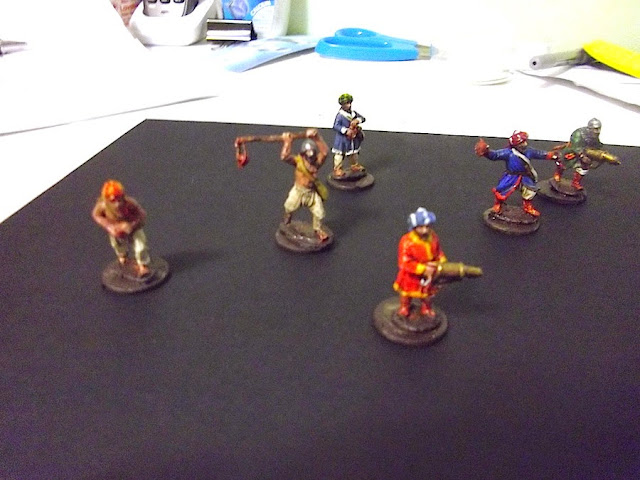 I really enjoyed painting these guys, and they made a nice change from the more troublesome Hat figures that I had been working on earlier.  These is nice movement, especially in the dude with the staff sling.  I am also amused by the range of clothing that in which the manufacturers dress their Naffath.  Gripping Beast's are wrapped up with cloths across their faces, while two of the Perry figures and going topless and shoeless.  Personally if I was working with NSFG, I'd want to be covered up but in clothes that I could get out of quickly is the spam hit the fan.  The chainmail coif worn by one of the syphoners seems like a recipe for disaster to me! 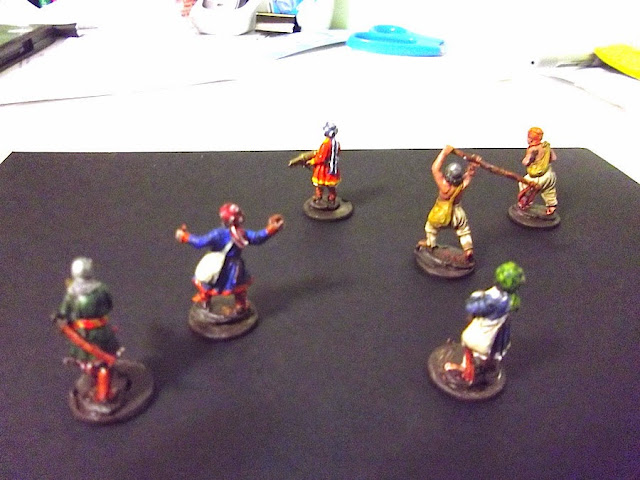 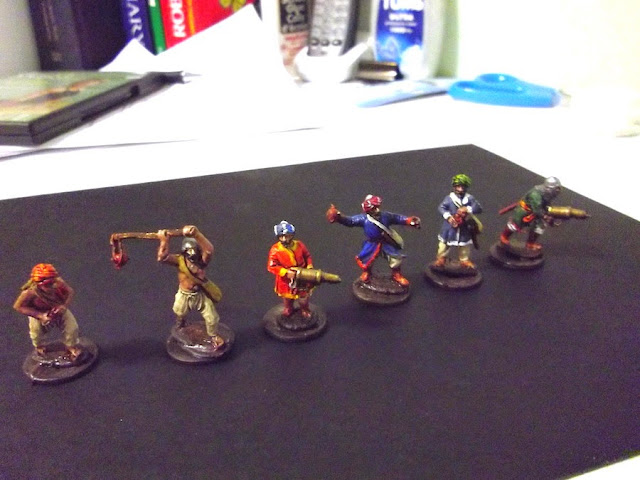 Oh yes and in keeping with the NSFG theme, I would like to note that the figures were stuck to their bases using a Hot Glue Gun which I figure is the modern crafting equivalent of Nasty Sticky Flaming Goop! 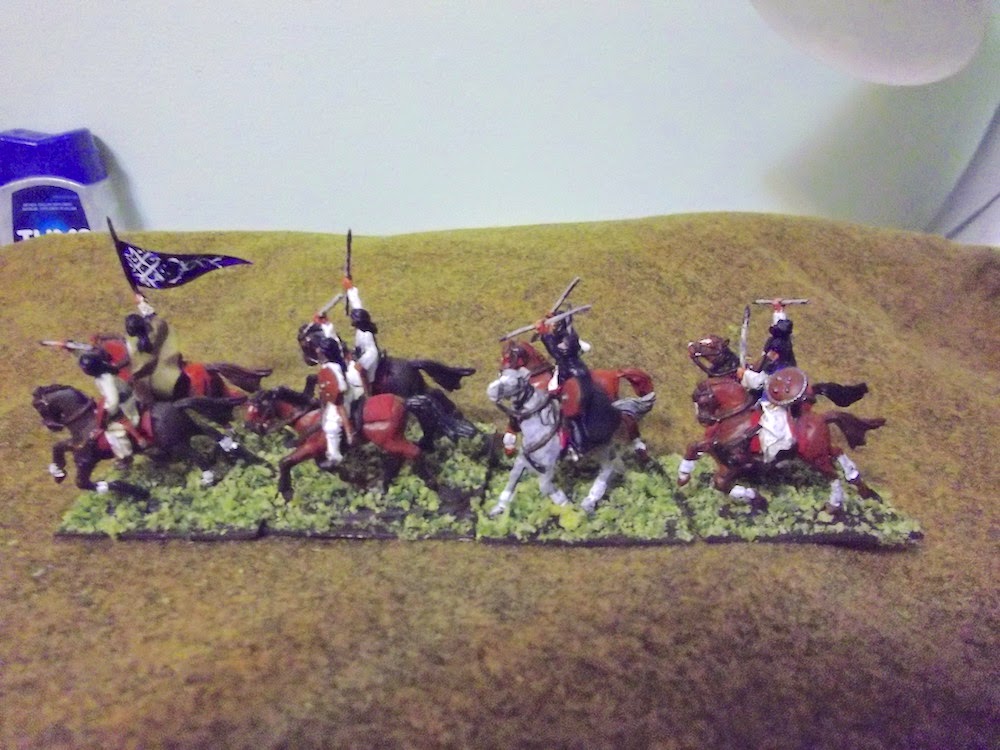 OK, it has been several weeks since my last posting.  Part of this was due to illness, part due to a hectic time at work (relatively speaking, my work life is still way simpler than it used to be) and part due to problems with this @#$%&* unit!!

Anyway we have an 8 man unit of 28mm Berber Light Cavalry mercenaries to fight alongside my Andalusians.  The figures are by Hat and produced in a hard plastic, and as such as a little "lighter" than metal 28s.    But the effect isn't bad if one keeps the figures in separate units.  And as I noted on a prior posting, the horses have a very nice fine boned Arab look to them.  The plastics don't paint up as well as metals since the detail is not as clearly defined.  While the plastic is harder than Airfix or Ecsi it lacks the crisp details of the Perry or Victrix plastics. 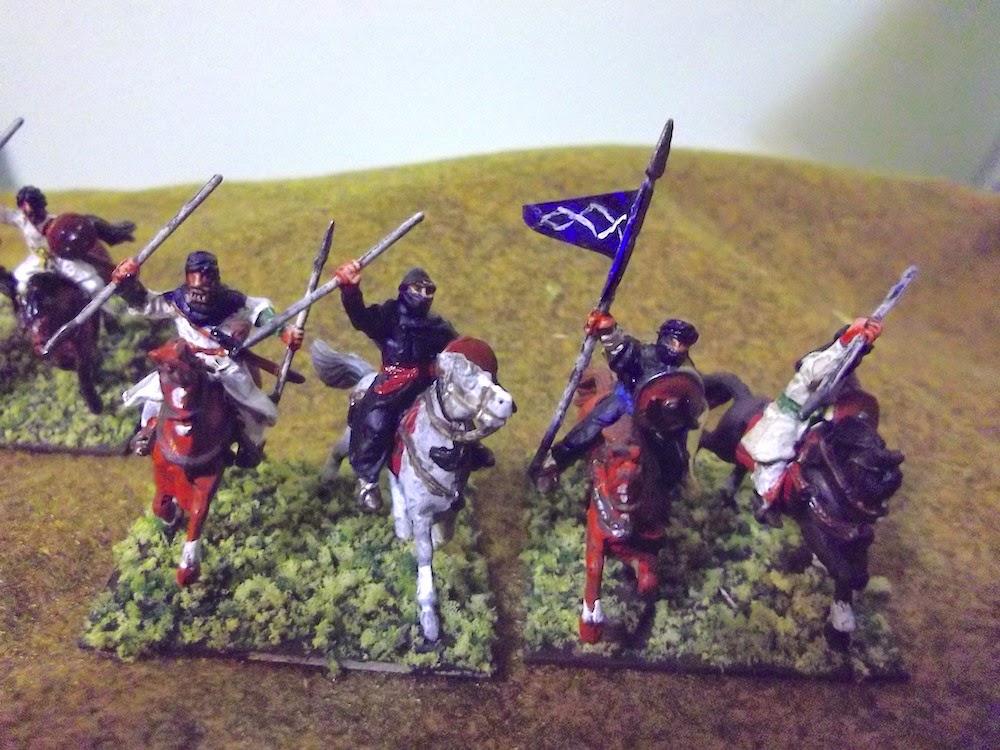 Anyway I ran into two issue with these guys, both of them originating between the seat cushion and the paint brush.  Issue one was I decided to go with a black primer since there was to be a lot of white on the figures, and I thought it might bring some crispness.  This worked really well with the horses, as the leaving a thin line of black primer gave a very good shading effect and highlighted details.  But it work less well on the riders since it required a lot of second coats with lighter colours (like whites, creams and yellows).  And before anyone asks, I am a "fix the riders on the horses and paint them both as one casting" kinda guy.  Therefore the idea of priming the horses in black and the riders in white isn't gonna fly. 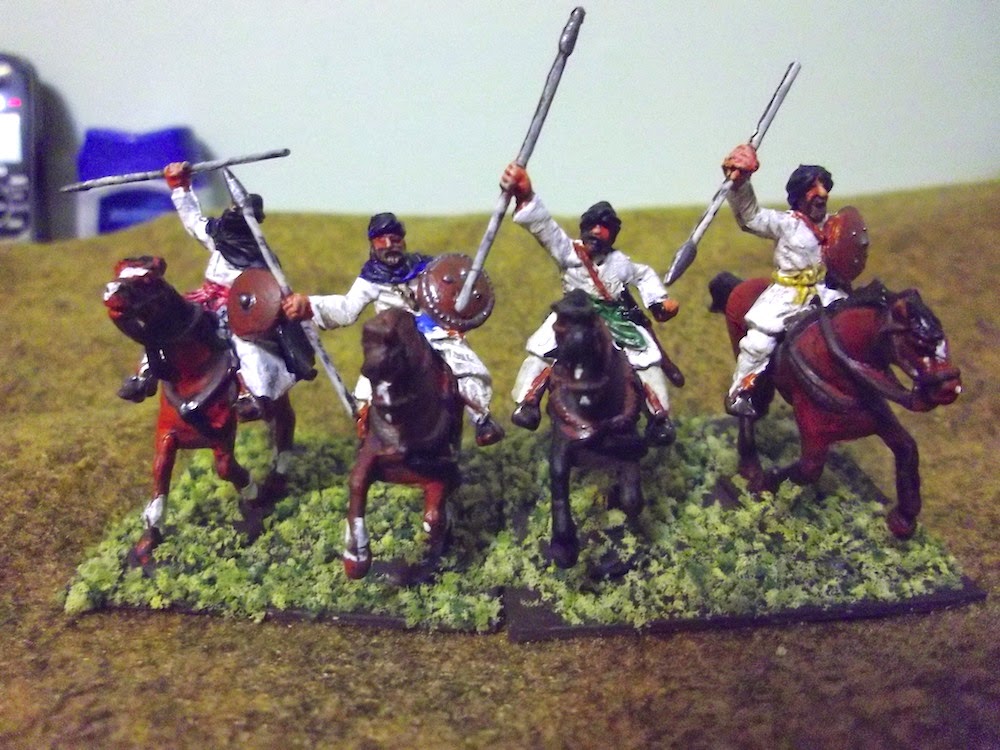 Issue two came when I decided to go for a "Berber Indigo" colour on some of the cloaks and head wear.  Great idea, but an Epic Fail on initial execution.  I used a "primary blue" acrylic with Black washes, and the end result was aptly described by my better half as "too shiny".  So I got grumpy and sick for a while and contemplated binning the lot, but fortunately thought better of it after a while. 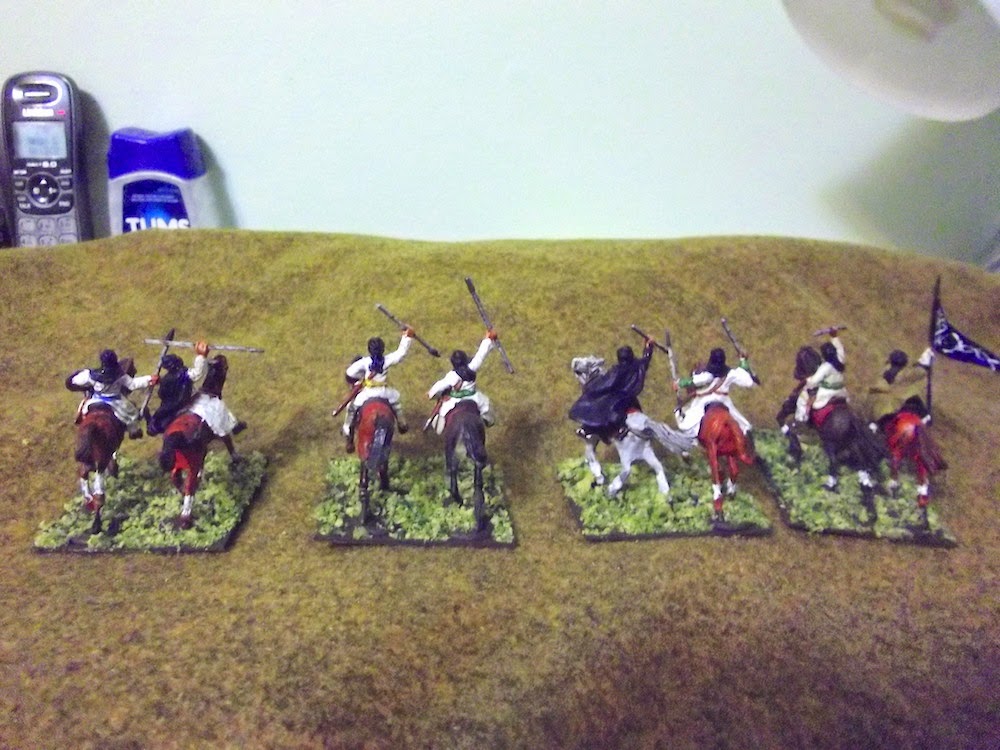 One of the advantages of working on campus is that there are neat resources available, like an on site fine art supply store that gives me a staff discount.  So I pottered off to chat up the store manager for ideas.  Her solution for Berber Indigo was a mix of Ultramarine Blue and Carbon Black, plus an optional dab of Dioxazine Purple.  Those are the names given to the Artists Acrylics shades that I work with, but I am sure that GW and other modelling lines have similar shades available with gaddawful names at three times the price (end of rant).  It turned out that my Purple had been binned a while back so I went with the Black and Blue mix but it greatly improved the figures and I rather like the effect.  It also got the approval of my at home colour conscious quilter.  I don't what the visual equivalent of "perfect pitch" is, but she's got it. 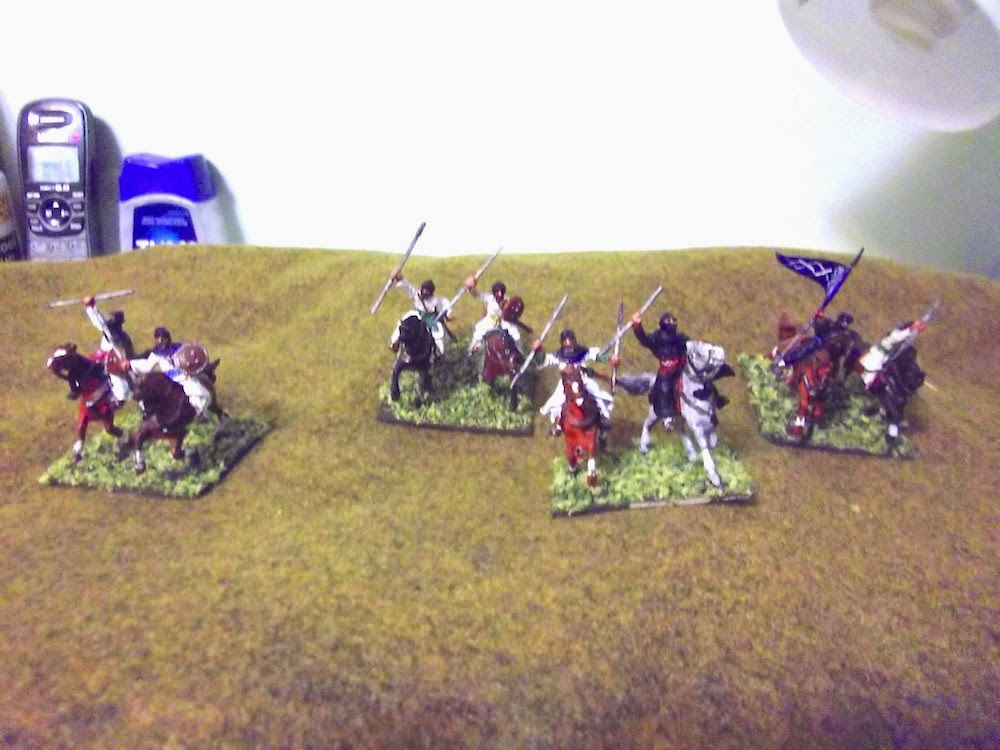 The flag is free handed based on Moorish tile designs plus artistic (sic) license.

I am not super enthused by the photos, they came out very dark and I had to play with the exposure and thus messed up the colours a bit.  But these guys are off my to finish list and on the blog roll!

So for this year's painting challenge, Curt has required that we paint up a 28mm entry figure of for this year's theme - Antihero.  Here's my entry figures - Socrates (the philosopher not the brilliant Brazilian footballer).   He's a metal figure by Reaper from their Chronoscope range.  I found them in December while off marking Actuarial exams in Santa Monica CA, at Aero Hobbies and Games.  It's a great little shop and I enjoyed my poke around.

So let's look at what an Antihero is, and no it is not the opposite of a hero so the semi-obvious choices of villain and heroine are out.  An Antihero is a character who is cast in the main role and sometimes acts as the villain, but who lacks heroic attributes.  Clint Eastwood's "Man With No Name" and Harry Flashman are prototypical antiheroes. 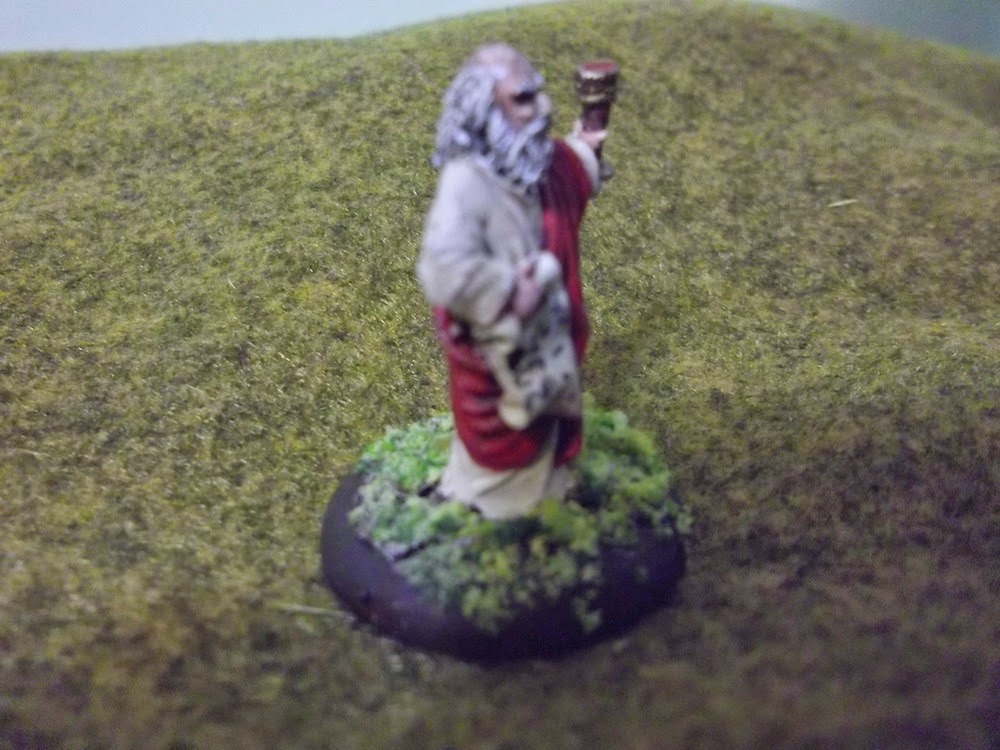 So why Socrates - in some ways I dunno really it just came to me.  But let's follow this through, is Socrates the obvious choice of hero.  Well, actually he's mostly portrayed as a old codger who asks a lot of probing questions.  Depending on who you read he could also be considered vain, curmudgeonly and having atrocious personal hygiene (think Oscar from the Odd Couple).  He doesn't fit the traditional heroic model, but I figure that he can be placed in a hero's role for two reasons.

Oh yeah, and he played a darn critical role in the history of Philosophy but I am not qualified to comment there.  Instead I refer the reader to the following education video by some prominent philosophy scholars.https://www.youtube.com/watch?v=m_WRFJwGsbY

Enough historical babble, let's deal with the figure.  The reaper figure was cleanly cast, is on the large 28mm side and was nice to paint.  I opted for basic colours without much ornamentation on the clothing, as I figured that Socrates was a pretty basic guy clothes wise, but tried to bring out details with shading, washes and highlights.  There is a lot of layered folds in the clothing, arising from a clock over top of a tunic which took some figuring out.  I was amused that I actually got to use my "Linen" colour to paint his linen tunic and the "Parchment" tube to paint the parchment scroll. 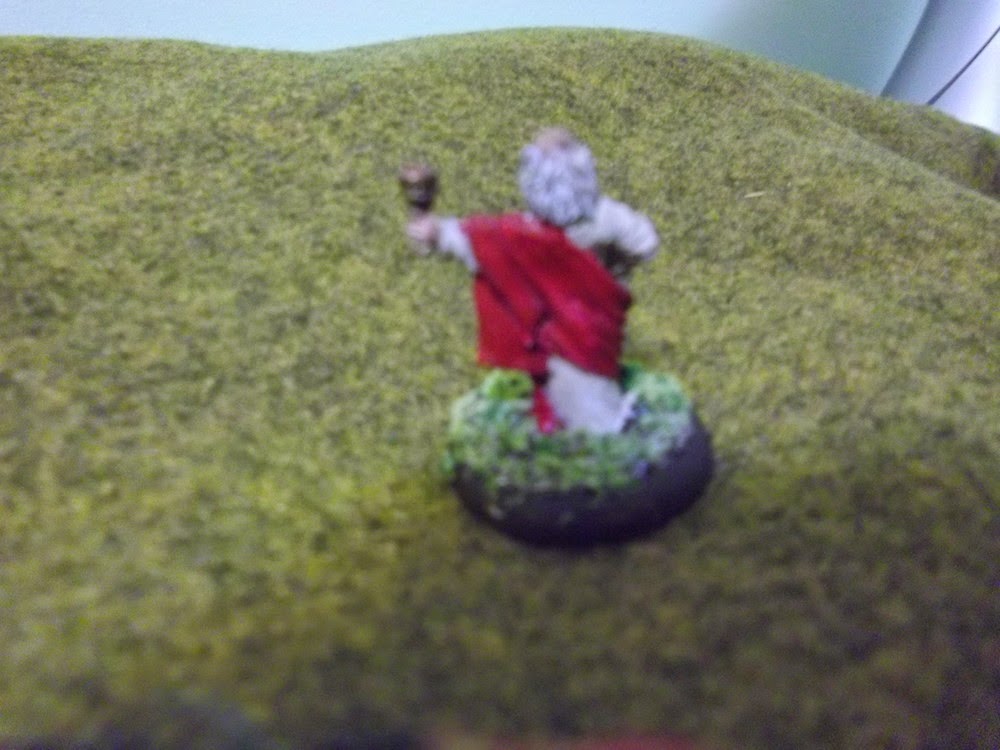 I liked the base to the figure - it's a slotta type base with a circular well that extends almost out to the edge of the base.  I filled the well with white craft glue and a mix of kitty litter, sand and model railway ballast to give some ground textures. 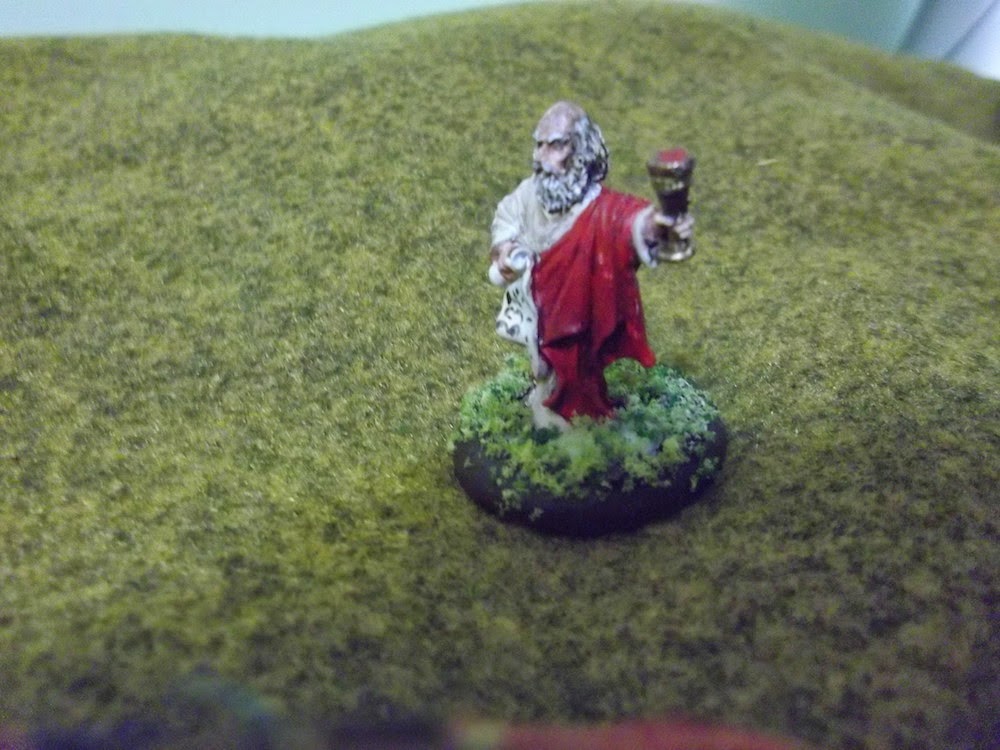