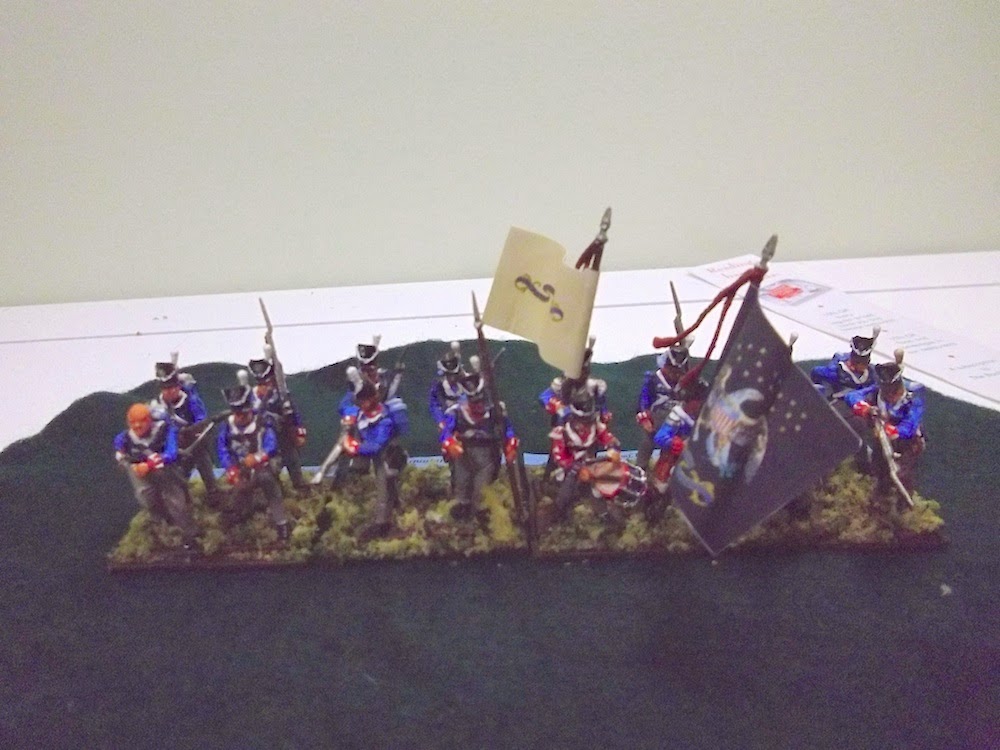 So I got these guys finished just in time for the final deadline for the 4th Analogue Painting Challenge.  These are 16 members of the US 13th Infantry from the War of 1812.  The are Victrix figures from the British Peninsula infantry boxes, with heads from the Victrix artillery box wearing the Belgic Shako.  Let's just say that the honeymoon is over with Victrix and I have deliberately not given any closeups of this unit.  I think that I've got bits from 3 different Victrix sets with torsos from the flank company box with left over arms from the centre company box. 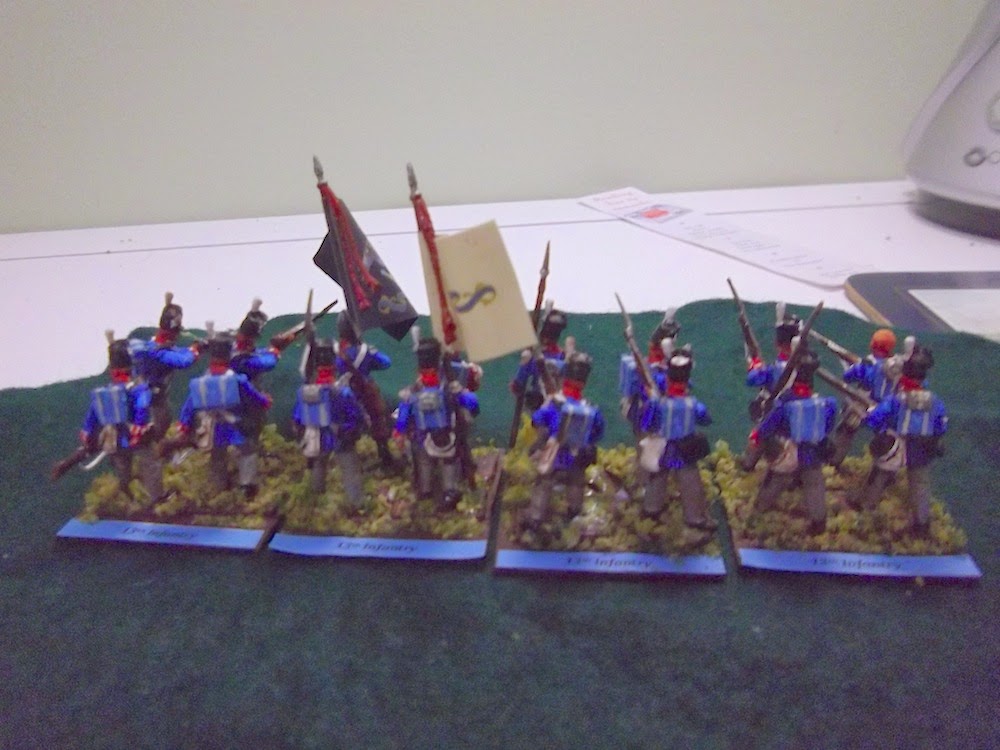 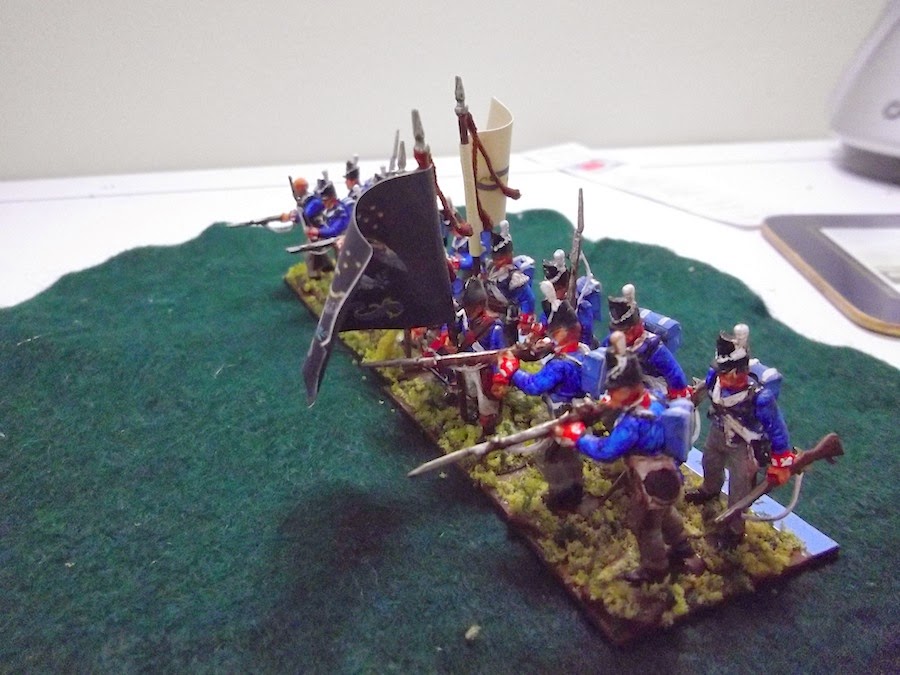 For the 13th I gave them the regulation blue coat - the coats are blue but my lighting and camera skills give them a purples hue.  I have used the Belgic shako to represent the false fronted "Tombstone" shako adopted by the US regs in 1813. 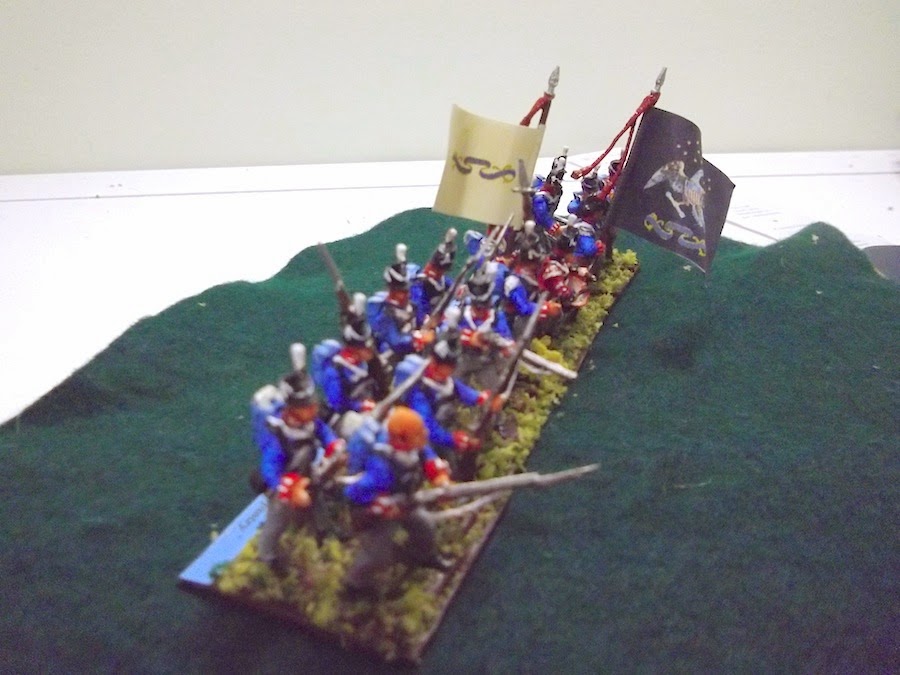 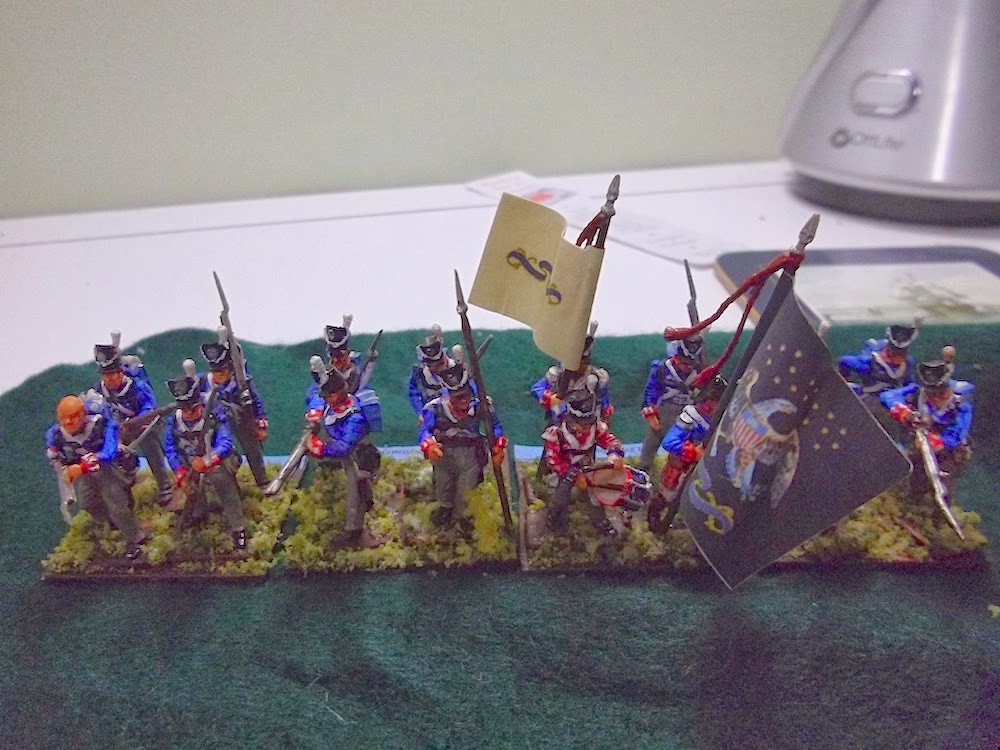 Loki has mentioned the Fat Lady Singing.  Hopefully at our house Sadie (picture enclosed) will be singing- she's not over sized but certainly has some nice curves.  No Fat Ladies singing, only an out of shape middle aged dude bashing out Beatles songs on a guitar. 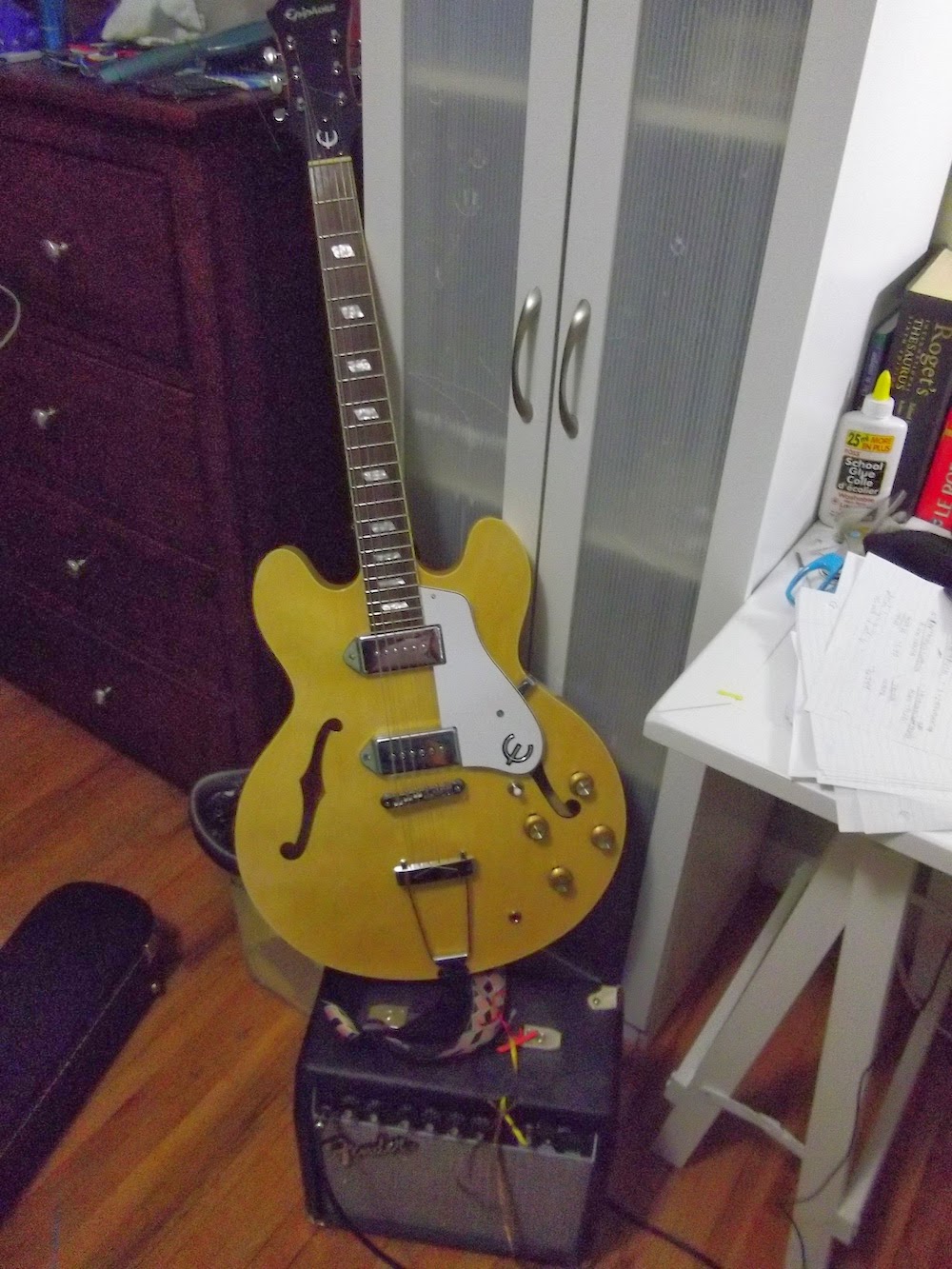 Thanks for running the Challenge Curt.  Have a large glass of something strong - you've earned it. 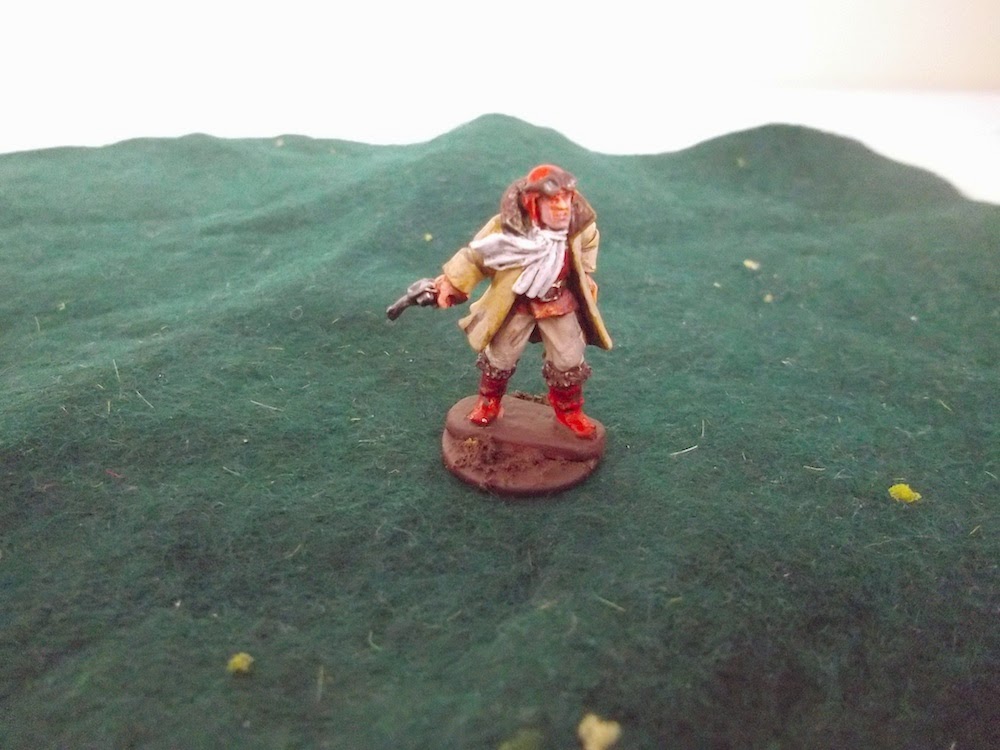 For the final themed round, we go with "Last Stand".  My entry is a 30s B-movie hero facing imminent doom at the end of the serial episode.   What is he facing, well that's up to the viewer's interpretation - but my wife has provided one version, to be revealed later . 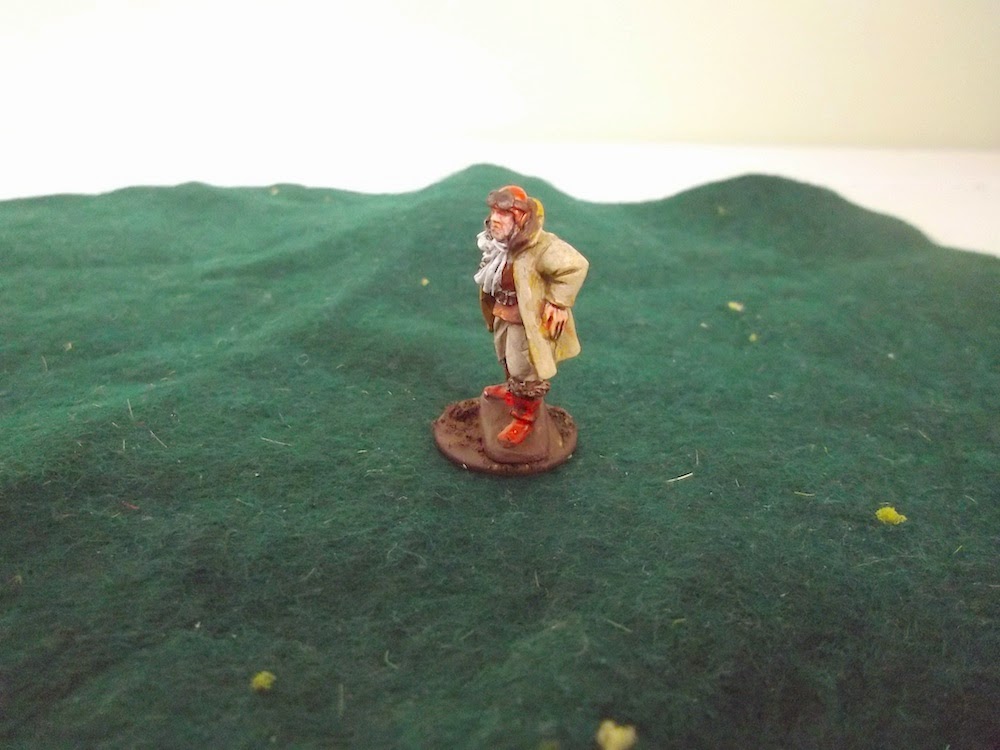 The figure is (IIRC) another WI freebie in 28mm by Copplestone from his Back of Beyond range.  He's clearly an aviator (bi plane likely) with his sheepskin lined boots, jacket helmet and goggles.  To keep with the B-movie feel I painted him in neutrals and browns to get a sepia tone to the figure.  However, I used metallics for his revolver, belt buckle and google lenses.  The pure white scarf is likely a token from a lady.  Overall I am pretty pleased with the result. 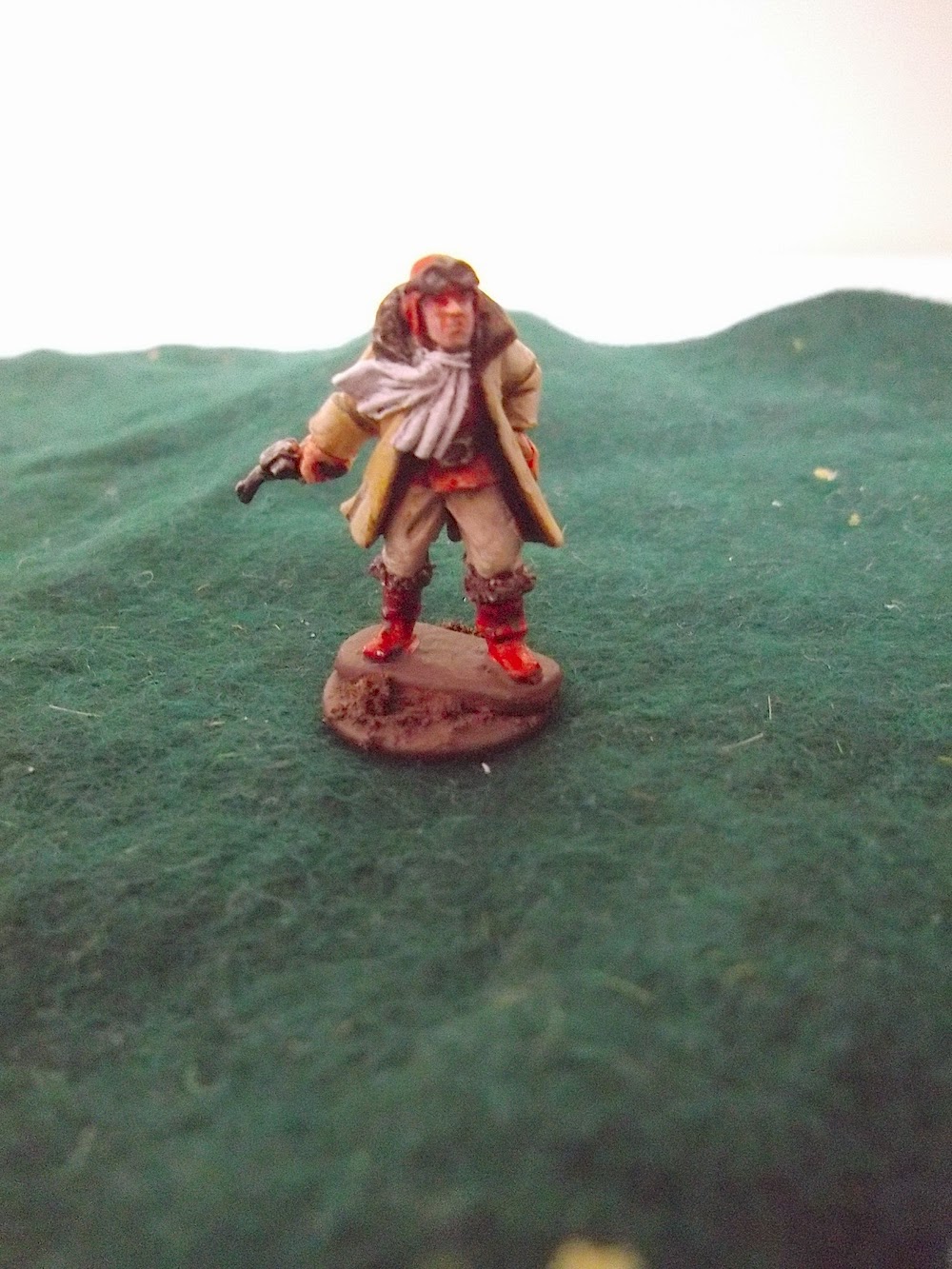 So Lynne decided that my aviator's doom should not be left to the viewer's imagination and suggested that he face off with a giant rat, so I have which I've attempted to capture this on film.  Ardee the pack rat is a Folkmanis puppet.  His very sociable, and regularly chats my ear off. 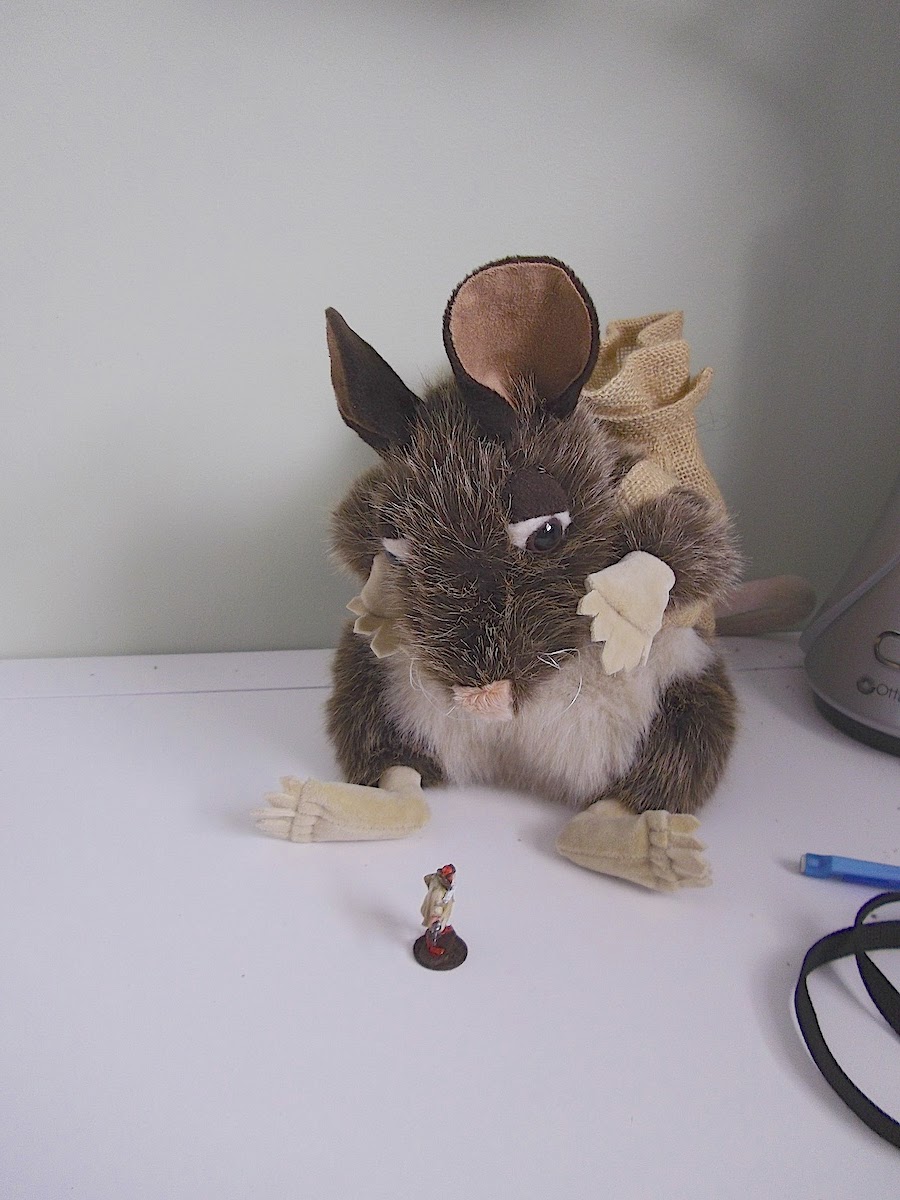 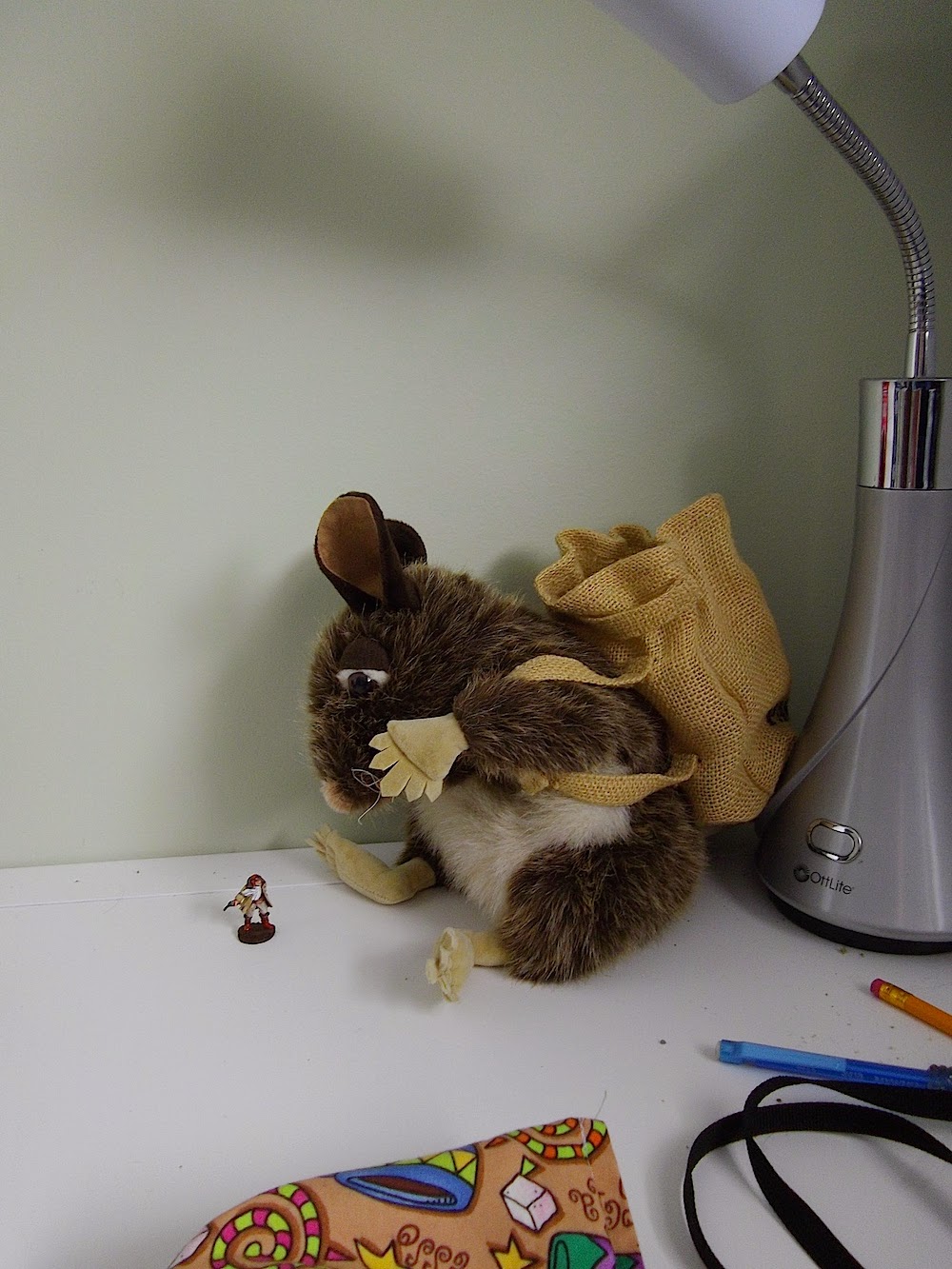 Consumer Affairs and Mysteries of the Universe

Dave D had a recent post about his experience in buying war-games stuff online.  For Canadian gamers like me, the process gets more complex and well down right weird.

Here's a summary of recent experience.

Looking forward to the math crafts…. 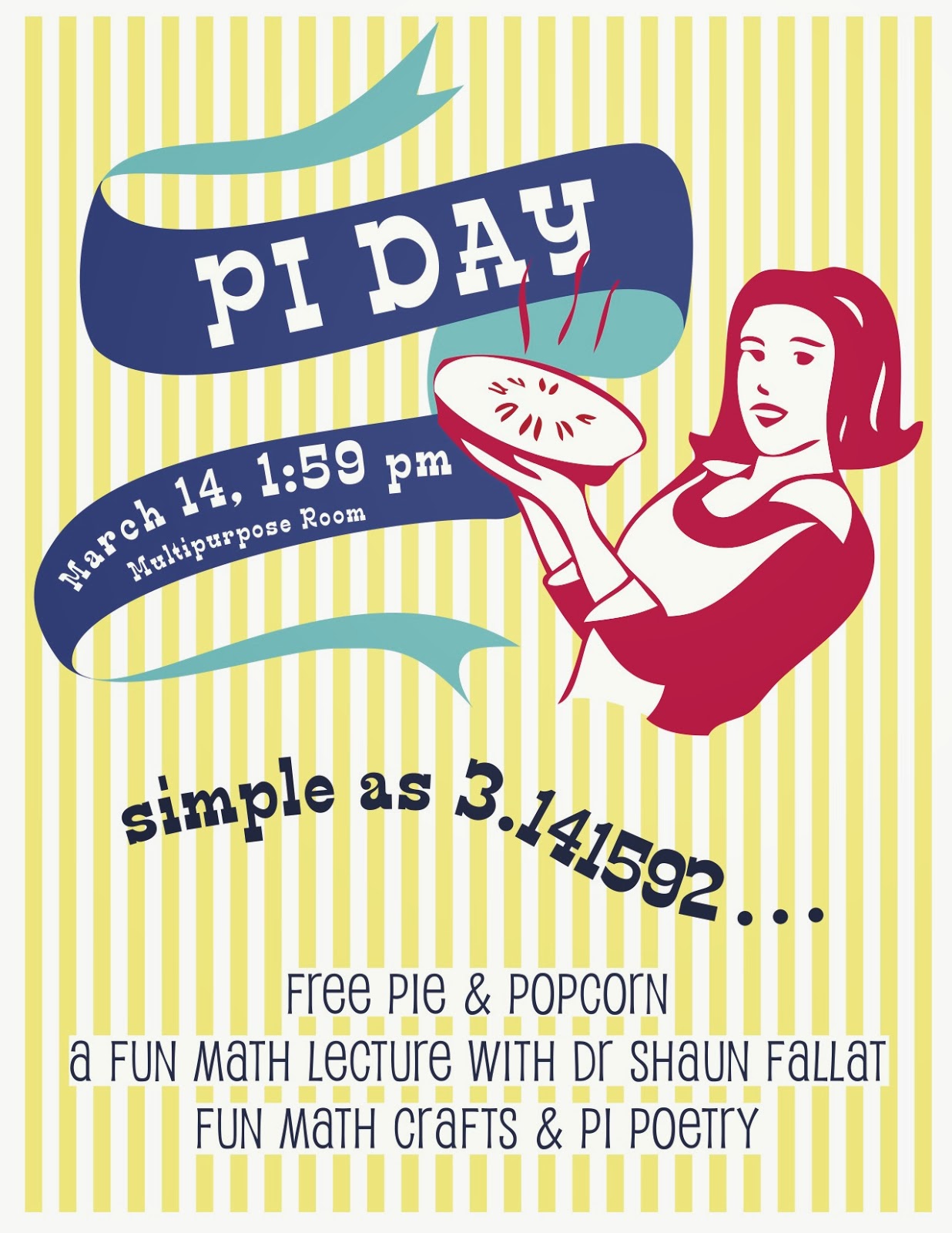 Posted by Peter Douglas at 10:54 AM No comments:

Your Input Is Requested


So I had one of those conversations that war gamers have with their wives.  No that not one.  And no, not that one either.  This was a good one.

It started with "Dear, why don't you find a better way of storing and transporting your figures?" and went through "what do other gamers do", with side trips to "I dunno" and "let's google it and see what turns up".  Oh yes, a we had a visits to "my gosh, gamers are a lot messier than quilters" "no sh*t" and "OK, in general guys will put up with a lot less clutter".

So we looking at revamping my storage methodology, which is currently based on shoving stuff into what ever rubber maid or cardboard box turns up and results in many casualties.  I would show you a picture, but then I would have to kill you!

I have sign off to look at better methods that we can create at home given two crafty minds.   She, being a quilted and an ex-brownie leader, is much more creative than mine.

So what input am I asking of my readers - simple send me a picture of what you use or tell me in words.  Both your general war-games room and specific army storage methods would be useful.

Thanks.
Posted by Peter Douglas at 2:20 PM 7 comments: 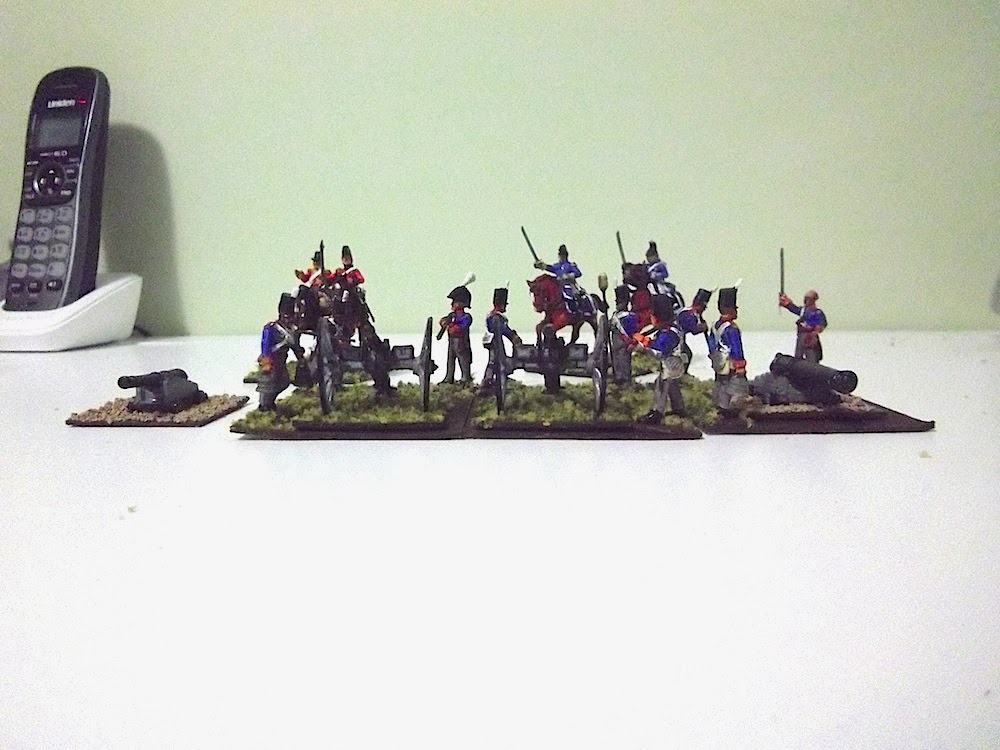 I've got a bunch of odd bits that I've worked on over the challenge that I am submitting as one War of 1812 smorgasbord.  The enclosed pictures are of 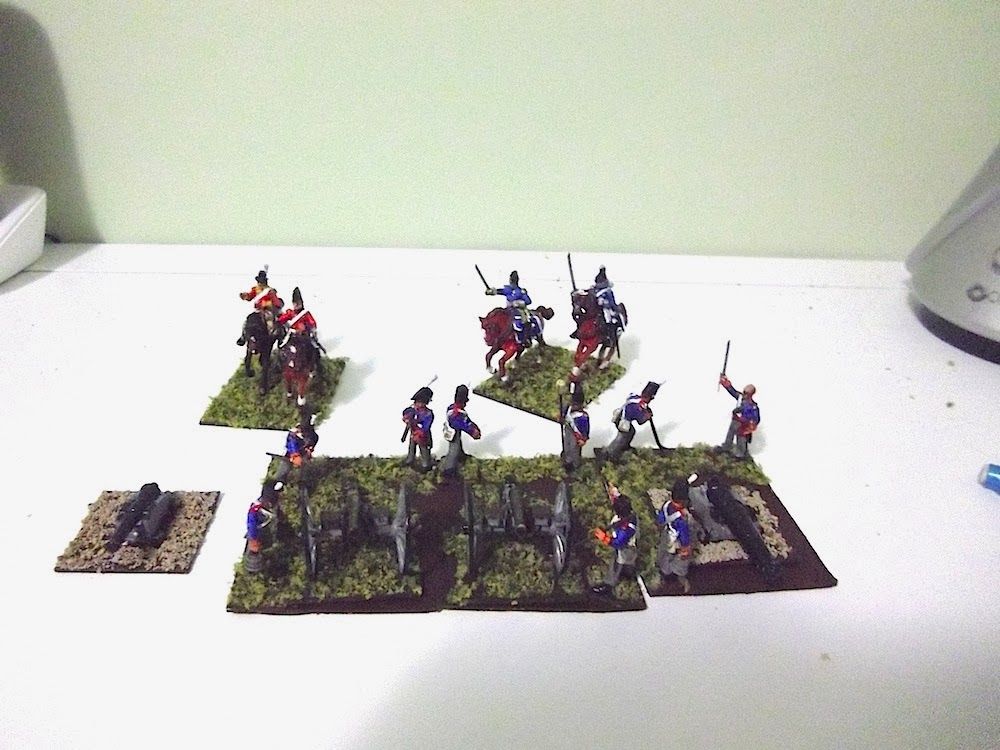 For the artillery, I opted to mount the gunners on one base and the pieces on a separate base so that I could switch the weaponry around to suit.
Posted by Peter Douglas at 9:15 AM No comments: 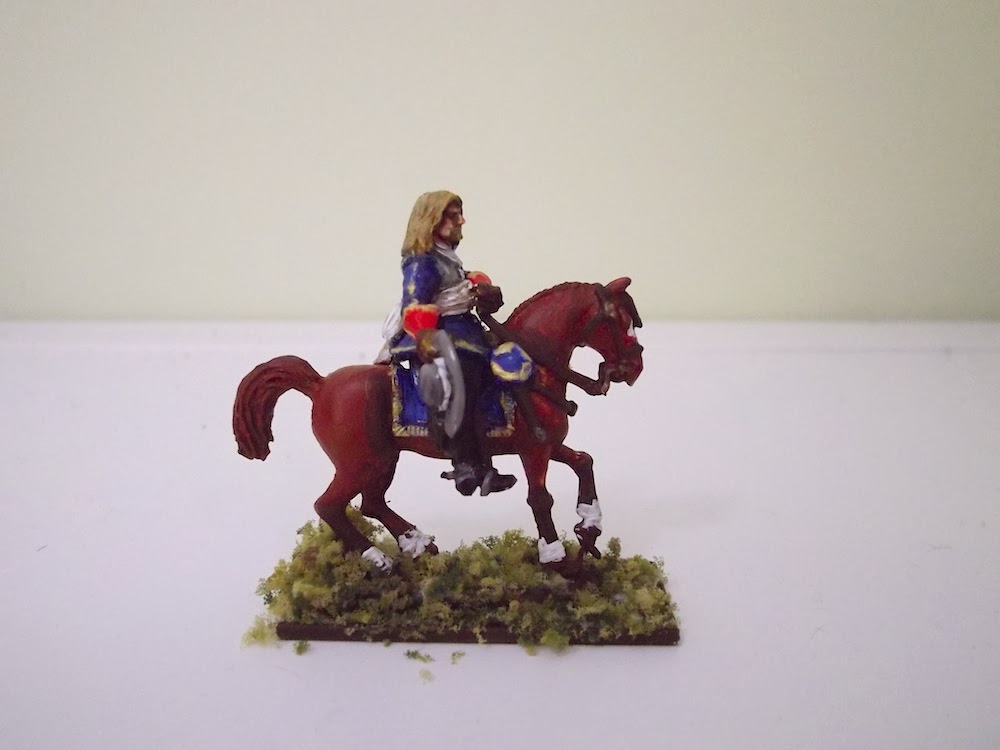 Ok I am taking liberties with the term "Favourite Character", but then again I'm not submitted a spider.  Research told me that minis of my favourite characters (the Dr, Mrs. Peel, the librarian from Discworld) were unobtainable, wouldn't arrive in time or cost an arm and a leg to get here.  Therefore I went to the lead pile to find a figure with Character, from a period with Character hoping to be inspired.

And what I inspired by - well I had this figure.  IIRC, it's a Wargames Illustrated freebie for subscribers and a casting of Prince Rupert by Mark Copplestone.  I am sure that the WI lore masters will correct me on this.  It's a figure that I think has a lot of character, as it should if it's meant to represent the uber-fop and alpha cavalier Rupert.

I've painted him as an officer in the Oxford Blues (later the Royal Horse Guards) circa 1685-1700, based on two illustrations in the Osprey book on the English Army 1660-1704.  This is an era with lots of character particularly for the English army - royal bastards, rival kings, father's being usurped by daughters and sons in laws and Scottish adventurers all vying for the throne at one time or another. 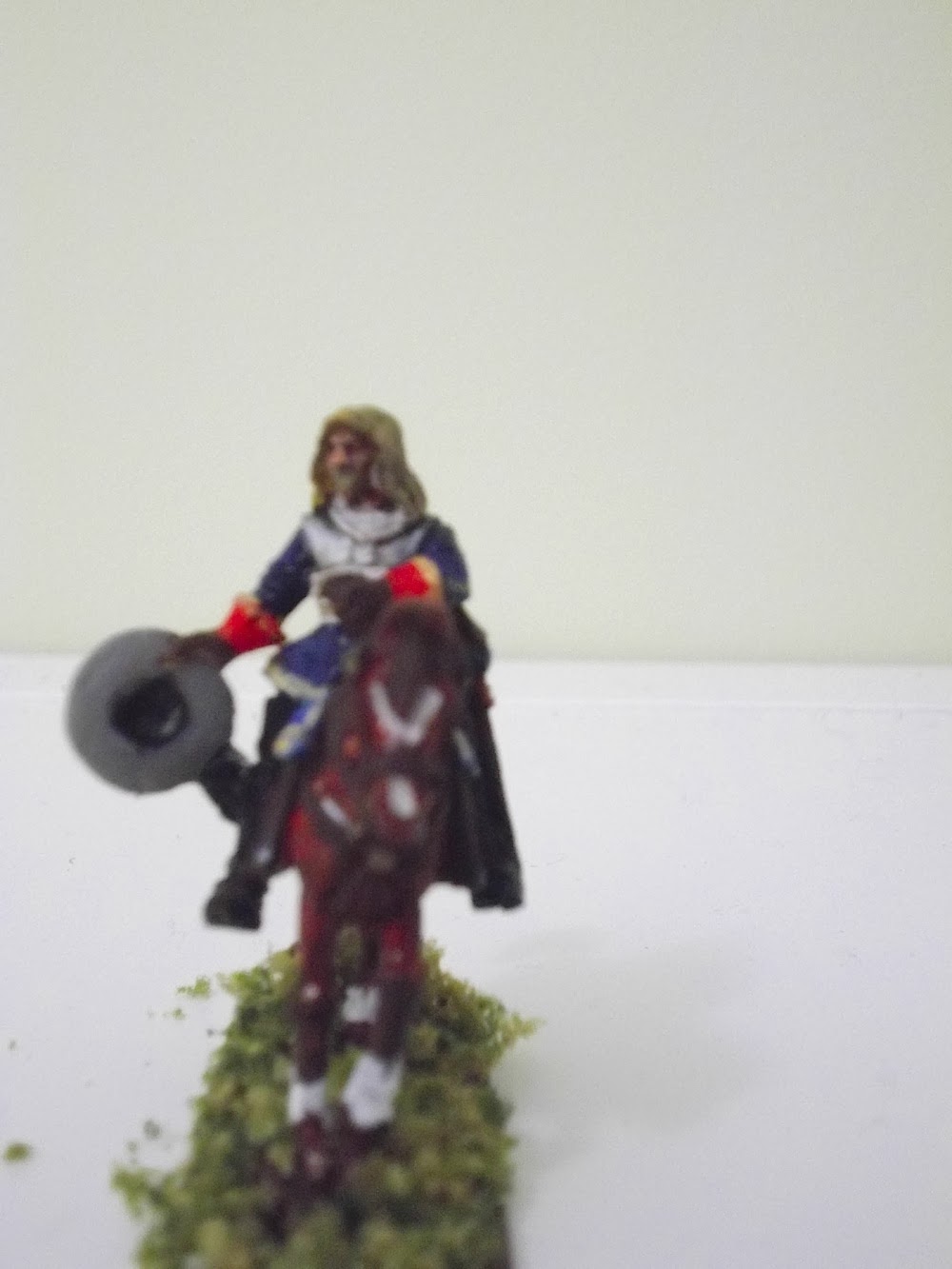 And why was I inspired to look at late 17th century cavalry uniforms?  You guessed it-  I blame Ray Roussell.  The budgie-smuggling, sandbagging badger himself. The man with the infectious enthusiasm of a Labrador retriever puppy in a kindergarten class and an obsessive compulsive need to paint every farking cavalry unit in the French army c 1689. 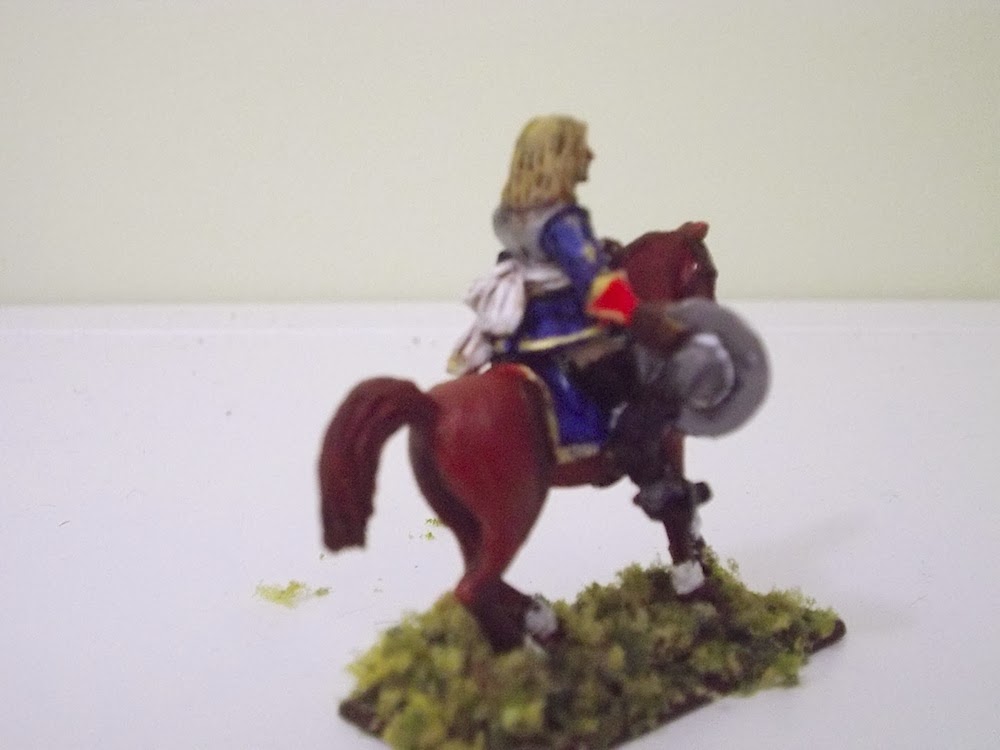 Thanks to Ray I've bought count them 3 sets of rules aimed at the lace wars in the last month (Beneath the Lily Banners I, Maurice and the Black Powder Last Argument of Kings supplement), plus I've spent far too much time looking at oh so pretty miniatures sold by various manufacturers.   On the plus side, my French and Indian War armies so their first table top action ever, after 15 years of existence, last night as we gave Maurice a try. 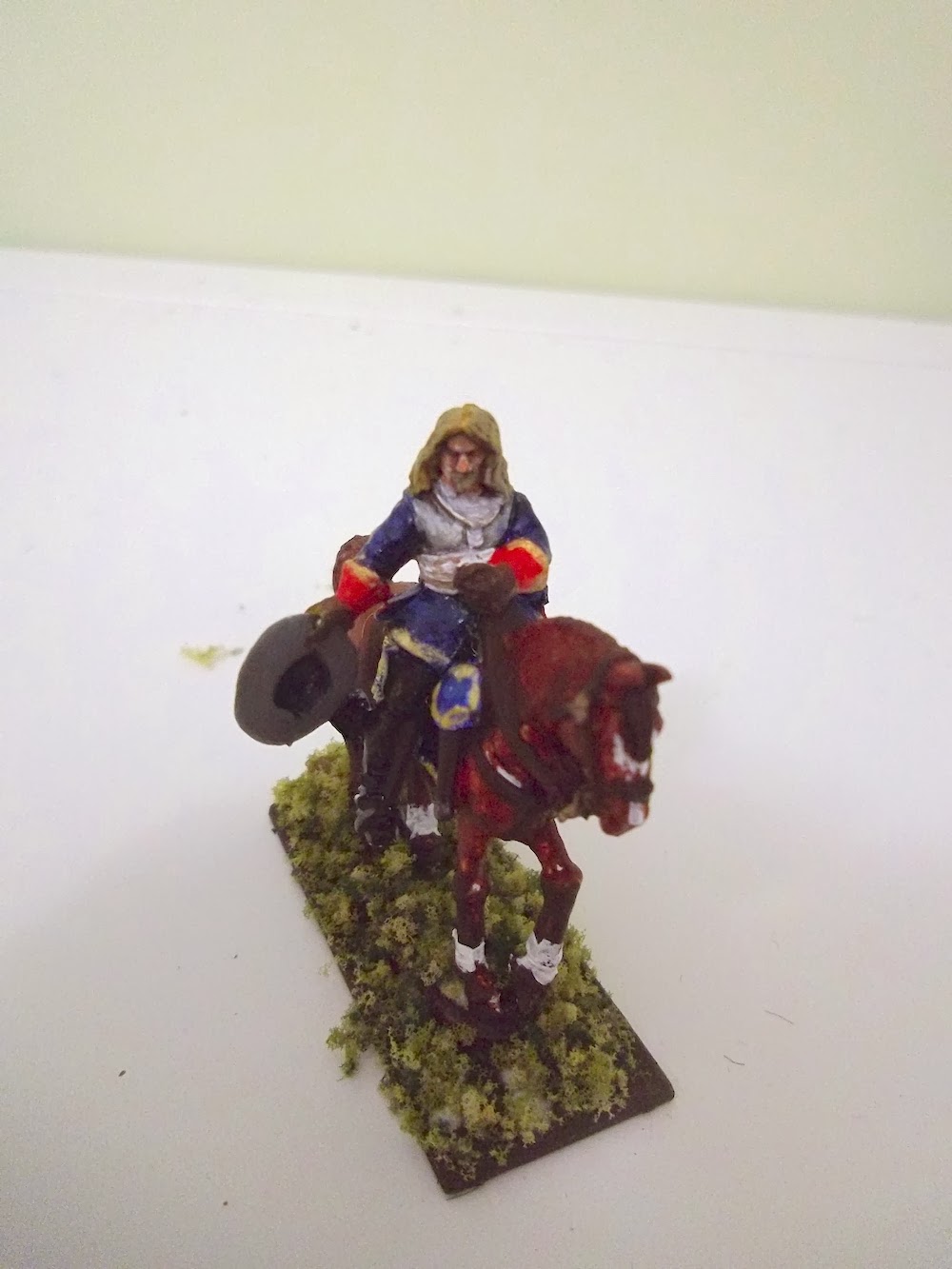 The Coldest Night of the Year - and a Game of Maurice


Friday night we had a game round at Curt's on what was the coldest of the winter - temps at -40 degrees C with wind chills pushing -50C.  Sylvain of course left a perfectly good car in his driveway, turned down the offer of a lift and rode his bike.

After months of board games and skirmish actions we played a set piece battle using miniatures.  Having being worn down by Ray Roussell's endless stream of floppy hatted fops and Stoke's Imagination I have re-discovered my interest in the lace wars period.   So, three different sets of rules have appeared in the house recently as follows.


Maurice by Sam Mustafa (as a PDF) 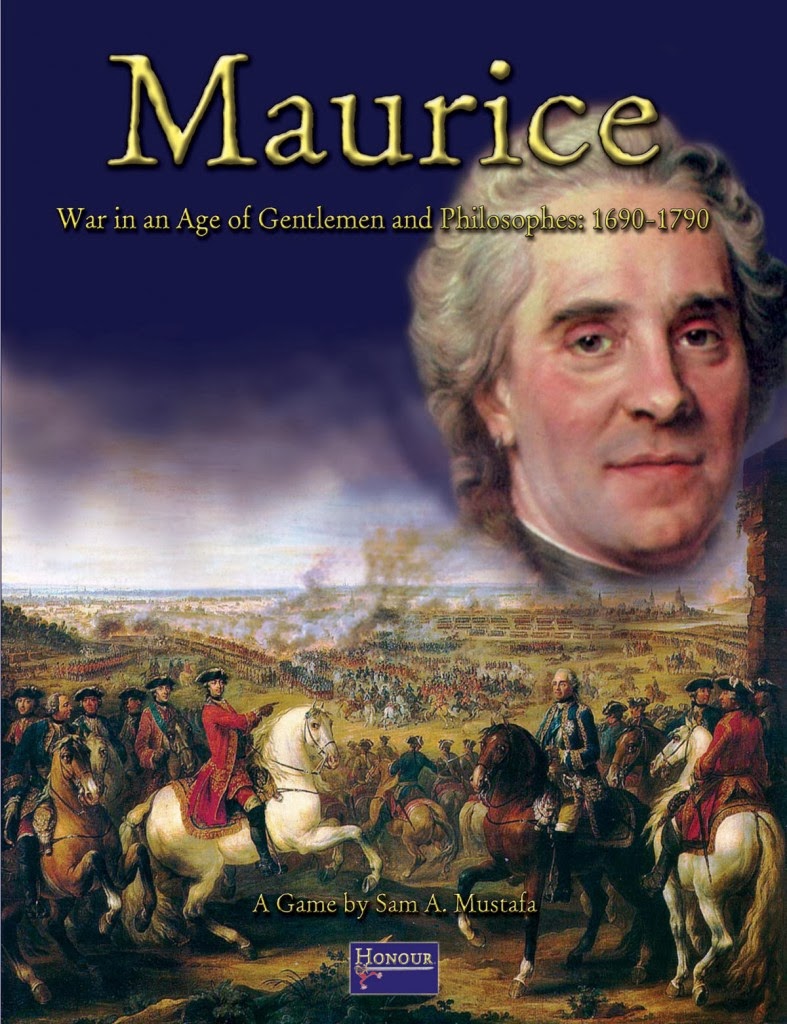 Beneath the Lily Banners (BLB) the original in PDF form as neither my budget or my patience was interested paying the monetary or time costs required to ship the new version by mail. 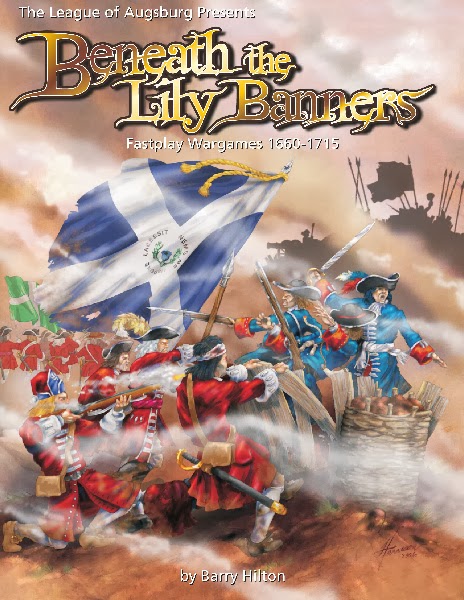 The Last Argument of Kings the Black Powder supplement not the excellent fantasy novel by Joe Abercrombie.  I took advantage of the post Christmas sale.

So we put my French and Indian Wars troops from the Louisbourg Campaign on table for a trial of Maurice.  This was the first time that these troops saw a game freaturing except for one or solo games.  Not bad considering that i started them in 1998!  No pictures were taken unfortunately - I think that our brains froze.

Maurice is a card driven system with a lot of period flavour and it gave a good game.  (Sam makes a free "Lite" version available as a PDF to give you a taste.)  It really reinforces period tactics - troops are easier to arrange in line at deployment than after manoeuvre, linear formations in two line work well and look after your flanks.  Players have to decide where to focus their attention, although it is possible to get infantry into a fire fight and then let them blaze away for a while without requiring much further attention unless you want them to charge home.

I used the Broken Ground from CS Grant's classic Programmed Wargames Scenarios.  Stacy took the Brits defending the hills attacked by Sylvain and Jeremy's French with Indian allies.  There were some predictable fumbles as the players (especially the attackers) got use to the period and system.  The first time the French tried to move an infantry force they managed to violate 3 of the 4 conditions required of a force (same terrain, same formation and within range).  At least they got the Regular Infantry part right!. 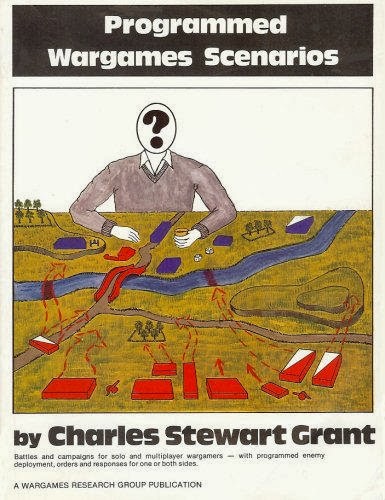 A French bombardment was followed by a fire fight between Indians in a woods and the Redcoat line. The French tried an attack on the British right, but got a nasty "surprise" when a light infantry unit hidden in woods charged their flank.  Really guys - you couldn't foresee light infantry hidden in a wood!  Talk about being blindsided by the blindingly obvious.  The attack came close to success, especially since Stacy left his unit of Colonial Conscripts on the far right and neglected a second line.  But in the end the French cracked before the British.

All in all it gave a good game and the card system worked really well.  I hope that they boys see action again.  Now I just need European light troops and cavalry!
Posted by Peter Douglas at 8:45 AM 2 comments: