In turn 8, the iniative order became key due to the Fire as She Bears (FASB) rule.  The Dutch won the toss and the order of movement was as follows.

In regular fire, Geloof reloads and hits Ruby twice.  Ruby is damaged and takes a morale check which she passes. 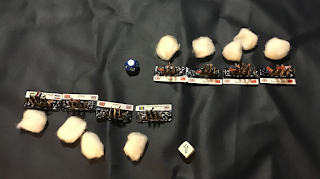 Turn 9 firing was on a FASB basis.  Monck failed to reload but Noorderkwartier hit Monck once.  Ruby hit Geloof twice but took one it in return.  In the morale phases, Ruby got a "must retire" result.

On the 10th turn the fleets swept past each other without FASB and the English admiral takes stock.  With his flagship worn and firing half dice and Ruby having to retire, he opts to retire with his squadron into safer waters.  The Dutch have taken less damage but let them retire rather than risk uncharted shoals.  This also made a convenient point to call it a day and figure where I'd messed up the rules.

Historically, typically the fleets came about and made another pass of one another.  The course reversals were made from the front and took a long time.  During the interval damaged ships attempted repairs, dropped out of line and/or retired home depending on the level of damage and the will of the captain and crew.  Seamanship was generally very high on both sides but it takes a while to get a line of 30 plus ships to reverse course.  James acheived the rare feat of a course reversal from the rear at Lowestoft which was quicker but took a high level of coordination and command control.


Cotton puffs on the unengaged side show unloaded guns.  Royal Charles and Royal Oak have heavy guns so take at least two turns to reload.  Speigel and Geloof failed to reload, but the Dutch flagship was successful.


Zeven Provincien and Ruby traded fire with Ruby taking 3 hits and her opponent 2.  Both became worn as a result.  Monck opened fire at Speigel and reduced her to worn, while Noorderkwartier fired an effective broadside on Royal Charles hitting 4 times on 7 shots.

I realize in retrospect that I messed up the moment after both sides turned on turn 5.  The Dutch certainly and probably the English should have moved faster as they are broad reaching not close hauled.  Oh well rookie error on a fist time play through.
Posted by Peter Douglas at 2:05 PM 4 comments:

Action off the Galloper Sands 1666

It's been 6 weeks since I've posted, but I've been up to a fair amount in my own private isolation chamber!  April was filled with end of semester and exams, with Zoom lectures  taking far more time than normal.  Ditto for doing individual final exams for every student.  There has been some painting appearing on the Quaratine Challenge and I'll try to catch up on these posts in the next week or so.

This weekend I got the chance to do a solo playtest of Barry Hilton's 17th century naval rules.  I ran through 10 turns using 4 ships squadrons from my Dutch and English fleets (1/2400 scale Tumbling Dice minis)


The flagships had veteran crews with all other crews being veterans.  The three biggest English ships have heavy guns.


I'll finish up the AAR later, but can make some initial comments on the draft rules.