Civilians for the Kleine Krieg


I had these figures painted up weeks so (they featured in my last SP game) figured they better make it on the blog while I remembered them!  This is a set of 8 civilian types to act as encounters, tasks or scenic items as required in my SYW skirmish games using Sharp Practice.

We have four members of the noble or wealthy middle class, one gent a younger lady, an older lady and a young lad playing soldier with a toy musket.  There are also four members of the working classes, a fairly well dressed fellow with a barrel, a labourer with a sack of grain, a female servant with a platter of food and a young lad who is scampering like he's just played ring and run!

All but one of these figures comes from the Perrys AWI range (have I mentioned how much I love these figures recently).  The style of dress maybe 20 years late for the SYW, but my research on Pinterest show that there was enough overlap that they work as well for c1760 as they do for c1780.  The V&A is a wonderful source of info on civilian dress in historical times FYI.  Having just checked my own link I've noticed I am missing a female servant with a broom who is painted but escaped my attention this morning.  I'll check with Fischer's Chasseurs as being likely culprits. 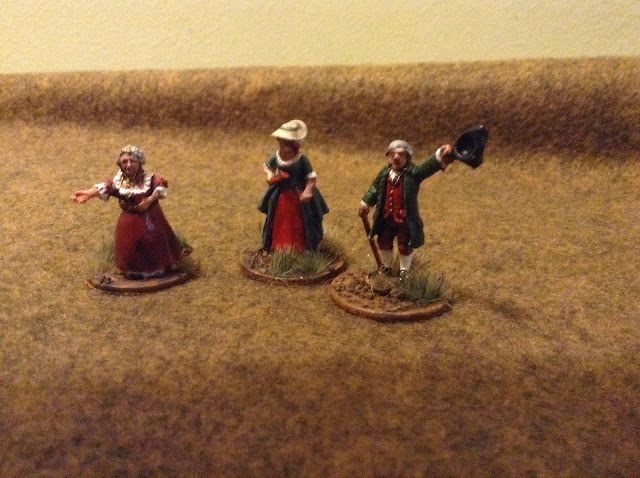 Here's the adult well to dos.  The odd figure who is not from the Perrys is the older lady in red, who participants in Curt's Painting Challenge may recognize.  She is a specialty figure of Maria Theresa from Westfalia miniatures and Kawe produced her as a limit run give away or the participants in one of the most recent challenges.   I carved away the orb and sceptre that the figure carries and I figure that she works exceeding well as a strong willed noble women of a certain age (think Bertie Wooster's aunts).  She is by the way a lovely figure and I wish Westfalia did more mid-18thC types.

V&A pictures show that many fine clothes of the age would be cut from pattern cloths (typical florals) but I opted for solids as I didn't want the fuss of getting the impression of a floral print right.  The colour that I use are based on real life clothes from the mid 18th century and the prints used were often subtle enough that they blend into solids from a reasonable distance. 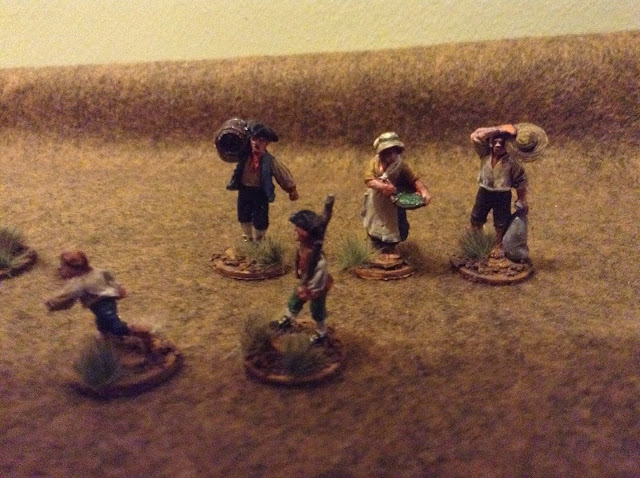 Here are the lower social orders plus the young noble lad with his musket.  Not the best photo  am afraid but so be it.  The two figures on the right are sculpted as African Americans to represent slaves in the Southern AWI campaigns but I painted them as Caucasians to suit my theatre of war.  I quite like the fellow with the barrel who might easily be a brewer, publican or wine merchant.


The past Friday I put on a SP2 scenario set in the SYW Kleine Krieg.  I had the players draw. For sides and we had Curt and Stacey taking the French and Sylvain the Anglo-Allies.  No pictures I'm afraid.

I ran the Dominant Hill scenario from CS Grant's first book of scenarios.  Basically equal sized forces enter from opposite sides of the table with a large ridge as the objective for both sides.  SP2 gave a good game, with tense moments around the random order of units moving.

We used the Lardies poker chips which I had painted, but not very well.  Basically there is one chip per leader (both blue and red) with 4 command chips fir each side a plus a green tiffin card.  When a leader's chill us drawn he can direct units to move/fire rally them etc.  Come and chips can be used to perform special actions, give a leader more juice or saved til the turn end.  The turn ends when the tiffin chip is drawn, usually before some units get to act.  Unused command chips can activated u it's who haven't yet acted when the tiffin chip comes up.  Then all the chips get chucked back in the cup and we do another turn. 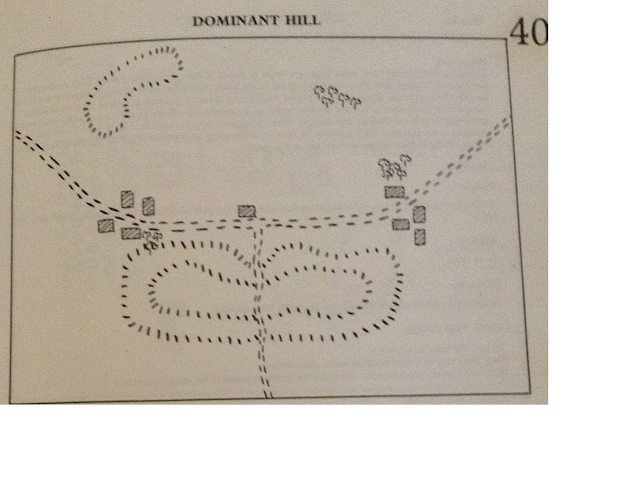 The way the chips fell in seemed like Sylvain got more units moving early in the game and the French getting the edge later on.  Both sides Hussars got shot about by the opposing artillery early on.    However Curt was able to move the Berchenys off to a flank where they were shielded by a wood.  Sylvain's hussars didn't have the same luck and hot pounded for several turns.  Artillery is very powerful in SP2 and we will limit the number of pieces and maybe downgrade their firepower a bit.

Sylvain opted to get his infantry deployed as a big formation and put his jaegers into the village.  On the other side, the French brought their infantry forward as they came on and set a unit of volunteer skirmishers out in front.  The volunteers eventually got shot apart by the thin red line, but held the hill until the line troops arrived.  Sylvain's line got hampered by his own hussars and shot at by line infantry and light troops.  Meanwhile Curt focused his gun on Luckners Hussars who were pushed back and then pushed off table.   Sylvain tried counter battery fire.  While it eventually worked it was a slow process and a poor substitute for the results Curt got in return.

Finally with a French line on the hill, Stacey and Curt used smart command chip play and lucky chip draws to get three shots on the British line before Sylvain could reply.  By this point the British force morale hit zero and they retreated leaving the French controlling the hill.

One nice feature of the rules is that kills are not common, but shock (morale) hits are key.  Get enough shock points on a unit and they'll be unlikely to do anything but run away.