So, with a very busy winter semester I am continuing with my one foot at a time approach to the Challenge.  I've low balled my target and am using my painting time as relaxing down time rather than rushing to meet a goal. 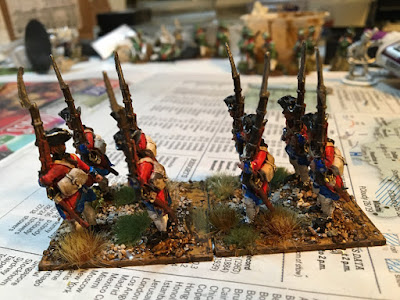 My ongoing project is two battalions of French infantry in 28mm using Crusader figures.  The first set of 8 from Touraine Regiment was posted last week, and his lot of 8 is from the Swiss Diesbach Regiment.  There is a reason for my choice of units, which I'll reveal further into the Challenge.   The figures are the same as the first lot, but in Swiss red with blue facing and laced waistcoat - a very natty combination if you ask me.

The Swiss regiments in French service date back to the Italian wars of the early 16th century (at least) and lasted into the Napoleonic age (at least).  They gave excellent service being steady under fire.

The original plan here was for my second set of French infantry to be from Touraine again including command figures.  However, I found the Crusader command dull so ordered in some additional officers and NCOs from Front Rank.  In the interim I kept the ball moving with 8 fusiliers from Diesbach.  My Front Rank package arrived last Monday after a lightening fast week long hop from Blighty.  Hopefully, we'll see some of the Front Rankers next week.

These next figures won't count for points as they were all but the basing finished before the challenge started.  Last year my SYW work included the British 15th Light Dragoons on horseback.  These are 12 dragoons on foot so that the regiment can dismount and skirmish.  The figures are Perry's from their excellent AWI range - two packs of the British infantry in Saratoga uniforms with short coats and helmets.  I did some conversion to make them look more cavalry like.  For instance I lopped off the bayonets and ends of the muskets to give the appearance of carbines.  The cross belts and cartridge boxes are wrong, but I figured that doesn't really stand out and anyway I can argue that they "acquired" appropriate equipment for dismounted work.

Most importantly the figures came in a mix 1/2 in stiff gaiters and 1/2 in trouser gaiters, where they should be in boots.  X-acto knife work stripped off the buttons and trimmed the tops of the stiff gaiters back to resemble worn riding boots.  For the other 6, I trimmed off the buttons and added boot tops from green stuff.  It was my first time using green stuff and I'm quite chuffed with the results.  I wanted to have these for this challenge, but they got impatient and painted them early.


So excluding the light dragoons, that's 8 28mm foot figures at 5 points a pop for another 40 points.  That edges me to within 5 points of my goal for the challenge.

I haven't posted a song link this year so I will post one that's been popping up on my iPod a lot recently.  I know there's an official Challenges tunes image, but I refuse to post anything to do with Kiss - I thought that they were the dumbest thing imaginable in 1975 and the intervening years have not improved my opinion.  I have instead substituted a more appropriate photo from my listening in the late 1970s.


Song "The Foggy Dew"Artist: Sinead O'Connor and the ChieftainsAlbum: The Long Black Veil

I'm 100% pure Sassenach but I married an Irish gal and Celtic music is a love of mine.  This is most definitely NOT the Foggy Dew I sang at bonfires with my family as a kid. 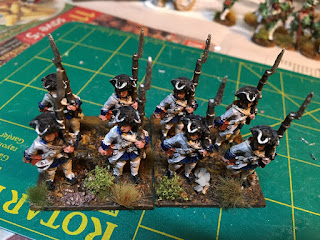 These figures had all but the bases finished last week, but didn’t quite make it in time.

Challenge veterans may remember that last year I worked on my SYW project for Sharp Practice, mainly focusing on my British/Allied side of the equation.   For this year I am looking at the French opposition.  In addition, I found that I like the lace wars so much that the scale of the project has ramped up from Sharp Practice skirmish gaming to Black Powder/Honours of War.

In keeping with what worked last year and my ramped up work schedule, my French will be coming out in drips and drabs.  These are the first 8 figures from the Touraine regiment, which like the rest of my battalions will be 24 strong.  The figures are 28mm from Crusader minis.  (FYI they currently have a SYW unit deal going on).

Interestingly these are a good scale fit for Perry figures but smaller than the beefier Crusader El Cid range figures I’d painted years ago.  They come in packs of 8 with 2 figures each of 4 subtle variants, with the emphasis being on the subtle part of the equation.  The end result gives a good representation of a regiment in step but with slight variants on the head and arm position – much less variation than a Perry regiment but not all identical.


I got these as unit deals (16 privates plus 4 command) plus an extra pack of 8 privates to flush out the units.  The command figs are nice but a little staid so I am getting Front Rank extras to add to the variety.  Update:  my Front Rank package was ordered January 8th and delivered to the frozen Canadian prairies today - one week late.  Front Rank put Royal Mail tracking on it and bingo - it positively flew here.

Touraine Regiment dates back to the 1620s and fought in all of Louis XIV’s wars (maybe including service at Laarden), and the wars of Succession (English, Spanish, Polish, Austrian).  It served in Western Germany through the SYW, fighting well in the losing causes at Krefeld and Warburg. 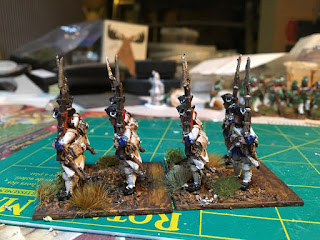 After originally  posting this I realized that I should have given a plug for the whole crew of bonus rounde ntrants, who's work is much finer than mine.  You can see them over at the Challenge Bonus Round Blog

What do you know I actually got a bonus round in this challenge.  I was not expecting as this as I have a very busy work schedule this coming Winter.  My service role is doubling from 1/3 to 2/3 of my time and while my teaching role stays constant at 2/3 of my time (and yes I teach in a math department).  Also we are hiring to replace a retiring faculty colleague and I am chair of the Search Committee.  But I found these in the lead pile and what do you, presto change we have a flight entry.

These are elements of Luftwaffe Fliegerkorps X, an anti shipping unit transferred from Norway to Sicily in early 1941 to help the Axis war effort against the Royal Navy.  We have two Me 110Cs and four JU 87R1s (Stukas).  The models are 1:1200 scale produced by CAP Aero and available from Last Square or Magister Millitum depending on which side of the pond you're sitting on.  They made an immediate impact in Operation Excess most notably crippling HMS Illustrious while proving the toughness of RN carriers with armoured fight decks.  The models are small (about the size of small micro armour vehicles) but convey the essence of the aircraft quite nicely.  They were primed years ago to go with my 1:2400 WW2 Naval project before that got mothballed. 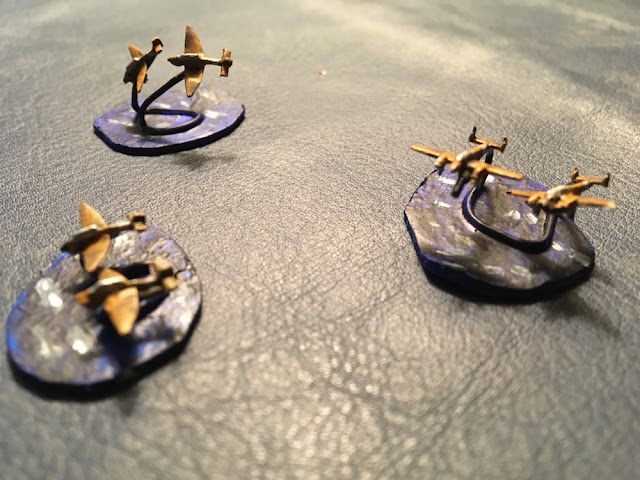 I've painted these in a very simple desert sand upper sides with pale blue-grey under sides and silver canopies.  Brief research showed either this pattern or desert camps and I don't have the head space for camo in 1:1200 right now.  There is a band of white around the rear fuselage which I've included, but I excluded the teeny tiny Black Crosses. 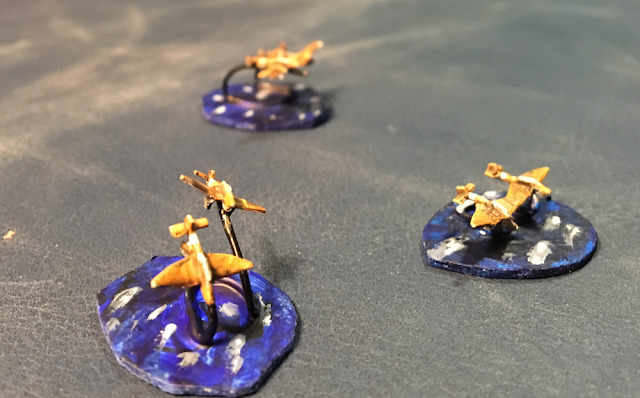 Basing in my normal cheap ass, impatient but works style.  Florist wire was bent into stands and glued to small roughly circular card bases.  By painting the wires black they tend to disappear at any distance (old magicians trick there) and the end end result looks better than it has any right to. 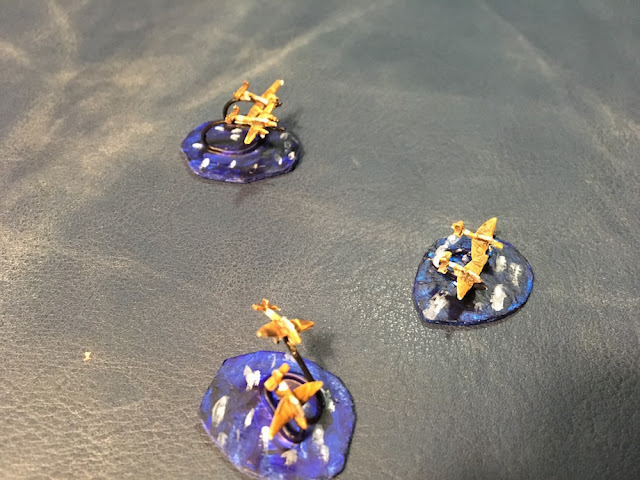 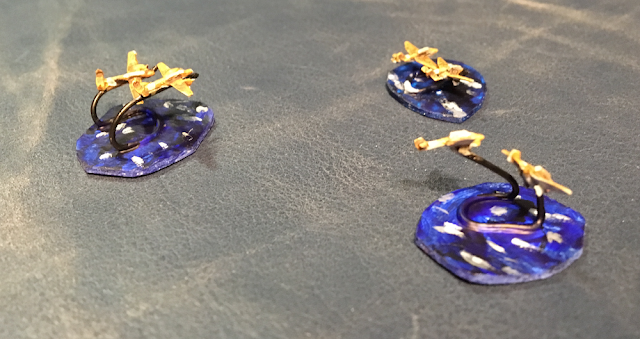 So that's six 1:1200 aircraft, I'll leave that Curt to work out the points value but I'd guess it would be similar to a small scale land vehicle.
Posted by Peter Douglas at 8:38 AM 2 comments:


Here's my first post for this year's Analog Hobbies Painting Challenge.  I've been participating since Challenge number 4.  This year I'm dealing back my target due to having to take on extra duties under one of the two hats that I wear.

These are 12 light infantrymen from of the Chasseurs du Fischer, an irregular unit from the French Army that served in the War of Austrian Succession and Seven Years War.  Fischer's unit was one of the better irregular units and grew to a 8 companies each of foot and mounted chasseurs.  They were heavily engaged in the Kleine Krieg throughout the war. 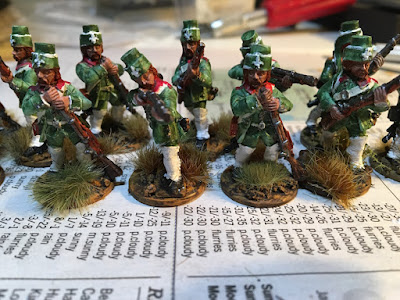 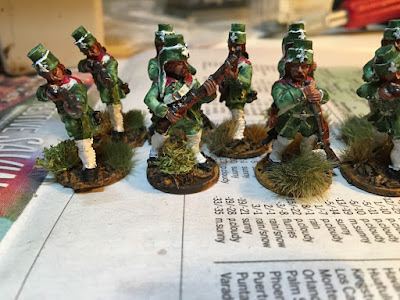 The figures are from Front Rank, who deserve a shout out for good service.  I had a small group of 6 chasseurs painted a year or so back and ordered 6 more to make a larger unit.  My package seemed late arriving, and after another Front Rank package arrived (which I ordered later) I contacted them to see if they could track it.  The next morning I got a note back saying that they'd sent out a duplicate package to replace the missing one.  Sure enough both packages arrived safely in the end, but Front Rank said to keep them both.


The figures are very nice and painted up nicely.  I like the droopy moustaches and the mix of loading/firing poses.  Front Rank figures tend to be stouter than Perry's for example, but with this period the bulkier clothing styles hides a lot of the extra bulk.  The mirliton (or flugelmutze to use the lovely German term) adds to the irregular feel.  Nothing better for skulking in the underbrush than a tall stiff felt hat with a long fabric tail on it!


For the first set I'd painted, I found that the solid green I'd used was a little flat and so opted for a wash technique to bring out more details,  This was an old technique that I'd used for my 15mm Austerlitz armies 35 years ago, and can give the impression of an aqua colour print, which I like for Lace Wars armies.  I'm not sure that this was the best decision, but that bridge is crossed now.  Perhaps I'll go back and touch them up or add a deep wash over top. 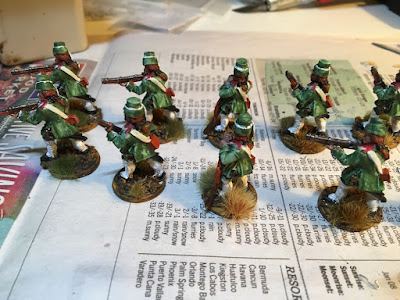 Uniform information on even regular units can be sketchy for the SYW, and there were conflicting opinions on this unit to be sure.   While my fist six have white belts, black cartridge boxes and brass buttons, I opted for buff belts, brown cartridge box and pewter buttons for this lot.  I found this print to use as a guide, which also illustrates the problems inherent with keeping up with current hat fashions. 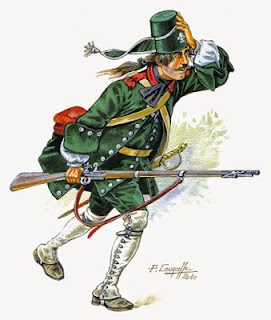 A (non-baker's) dozen foot chasseurs in 28mm at 5 points a pop gives me a starting volley for 60 points.  At least I've broken my duck.