It's the Mercenary Bonus Round over at the Painting Challenge, please go have a look at al of the lovely work here.  My submission is below.

For the Mercenary Bonus Round I have a German Regiment from the French Army in  Seven Years War.  There are 16 members of the Nassau Prince Louis Regiment, using 28mm Front Rank figures.  Napoleonic wargamers will be familiar with Nassauers who fought for the French in the Peninsula, and then against the French in the 100 days campaign.  Under the Ancient Regime, the french army raised a number of foreign regiments, which were in many cases considered better than the native French regiments.  Not being French citizens, I think that these can qualify as Mercenaries. 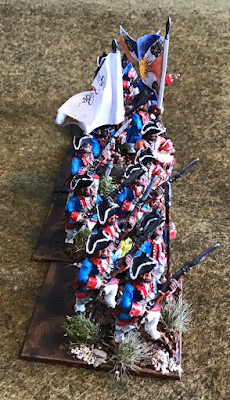 Swiss, Irish, Scots, Italian, German and Walloon regiments all served in the Western Germany in the SYW.  Recruitment and organisation varied according to the nationality, but many of the German regiments came from the Palatinate region of western Germany, including this regiment from the Nassau area.  This Regiment started as the Nassau-Saarbruck regiment until it merged with the Nassau-Ussinghen Regiment in 1758, becoming the Nassau regiment whose colonel was Prince Louis of Nassau (I'm not sure which line as the history, naming and ruling houses of minor German states is convoluted).


Like many German regiments in French service, they wore blue uniforms, in this case faced red.  The House of Nassau is related to the House of Orange, as can be seen with their flags and drummer's liveries.  Like Dutch fans at the World Cup or Olympic Speed Skating oval, the drummers wear ORANGE!   I took a couple of liberties on uniform details, so button counters be forewarned.  The Front Rank figures came with collars, while the Nassau uniform did not until after the SYW.  Had I caught it earlier I would have trimmed the collars off but I didn't catch this until about half way through the painting process, and went with red collars as I thought it looked nice.  Also the drummer should possibly have red lapels under the lace (the figures had none but lots of lace) and orange breeches (just caught this one now).  However, SYW uniforms weren't regulated as much as later periods and I figure a to would depend on local supply and colonel's whim.  Neither the drummer not the collars look out of place, so I'm good with them.

So that's 16 28mm foot figures plus two flags is 82 points plus bonus round points.  There's another 8 Nassuaers on the work bench to bring the unit up to standard complement of 24, but they'll have to wait a week or so. 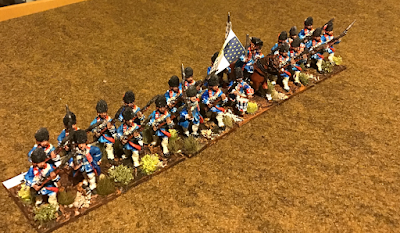 For this week, I have completed the full battalion of the Grenadiers de France for my Seven Years War project.  There are 22 foot and one mounted in the battalion, but 8 of the footmen appeared earlier in the Challenge, so the count for this week is 14 infantry plus one mounted officer.  Figures are 28mm from Front Rank.  I really like the Front Rank figures but they do suffer from monopose for the rank and file.  However, the monopose works for the SYW since the uniforms have an old fashioned toy soldier feel. 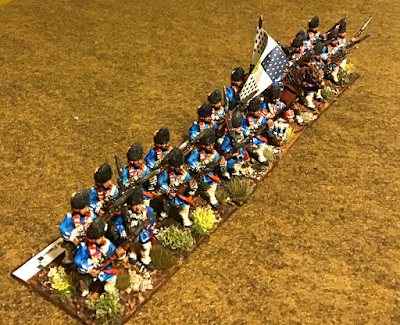 The Grenadiers de France were formed after the War of Austrian Succession from the grenadier companies from several regiments that were disbanded at that time.  They followed a different organization than most French infantry regiments being formed into "brigades" instead of battalions and were heavily engaged in the campaigns in Western Germany. 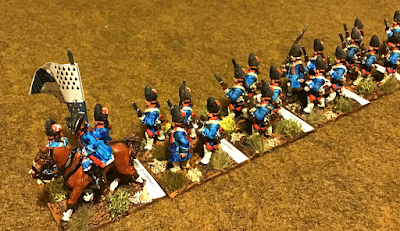 While the regular French regiments wore white, the Grenadiers wore blue coats with red lapels and white lace.  They also were the first to wear the bearskin grenadiers cap which became popular with many regiments during the SYW.  The combination of their droopy moustaches and braided coats with the pose of these Front Rank figures reminds me greatly of..... 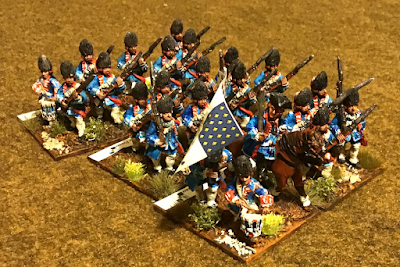 I bought a battalion pack of 24 foot from Front Rank, but swapped out two foot figures for a mounted officer.  Front Rank included two standard bearers while the Grenadiers (again just to be different from regular regiments) carried only the Ordonnance colour and did not carry a Colonel's colour.  I have a home for he other standard bearer and grenadier private and spare officer fits nicely, as he looks done the line.  The flag itself was downloaded from the Kronoskaf site, manipulated in Preview and then printed at home.

So by my math, that's 14 foot plus one mounted officer plus 1 flag = 81 points, for both my total score and the Black Powder side duel.
Posted by Peter Douglas at 9:02 PM 9 comments: