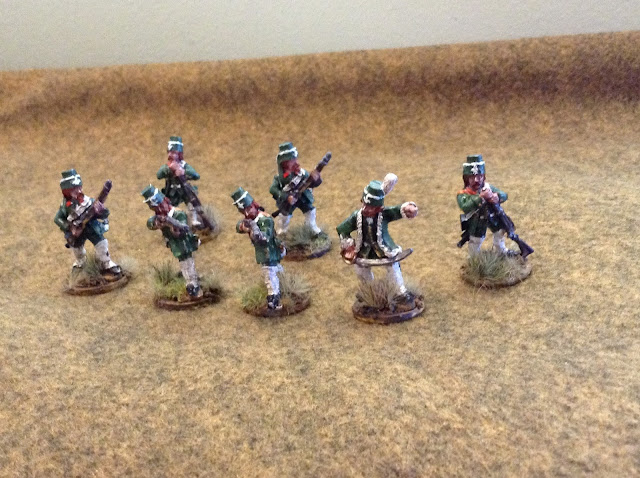 Another iconic unit from the Kleine Krieg, this time for the French Army.  Fischer's Chasseurs were formed for the War of Austrian Succession by Johann Fischer, a German officer who distinguished himself at the Siege of Prague.  By the Seven Years War it included mounted and dismounted chasseurs.  They were one of the best light units in the SYW and served in an awful lot of Kleine Krieg actions.  Late in the SYW , the unit was given to the Duke of Conflates with Fischer continuing as second in command until his death in 1762. 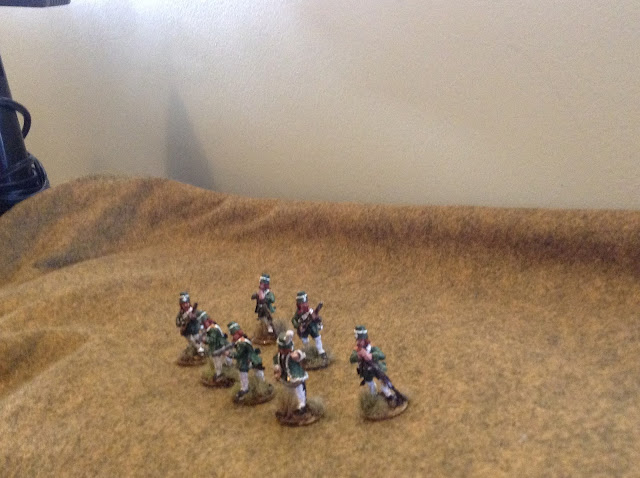 This unit represents 6 dismounted chasers plus an officer.  There were supposed to be 2 groups of 6 plus officers, but it turns out that I can't add.  I ended up with 2 officers and 6 other ranks instead of 12.  Oh well, that will be rectified eventually.   To avoid postal gouging I ordered these to be delivered to my dad when I was visiting the Uk in May.  They were painted up on my return in June and took part in our first SP2 action (albeit with plain bases).  Since then I have added texture and fluff to the bases. 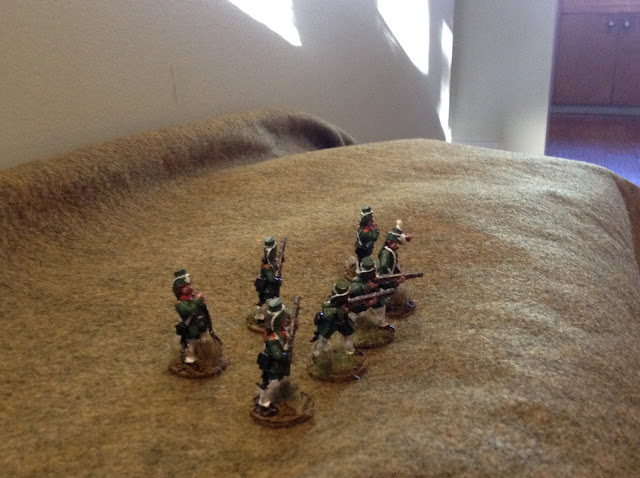 The figures are from From Rank, and these are the first Front Rankers that I've painted.  I have to say that I was impressed with the figures and I will likely get more.  I expect to remain a mainly Perry man for a variety of reasons, but it's nice to have a variety.  In this case I went with Front Rank as there aren't many options for a light infantry figure in a mirliton. 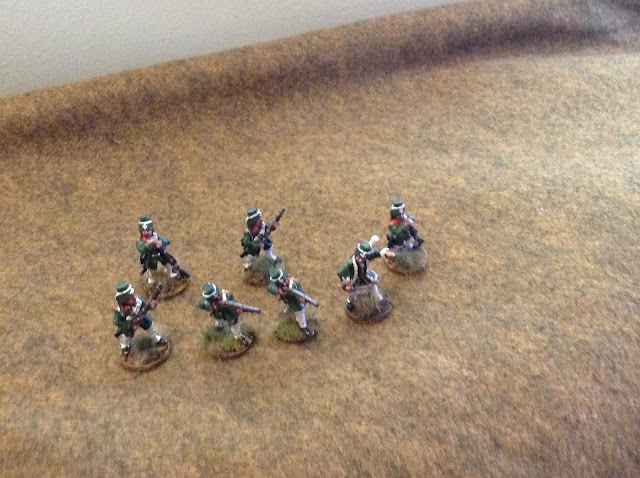 Gaze on ye mortals and be humbled....

You have likely seen photos of the game on the Perry's site and FB page.  These two bloggers did the armies involved.

Email ThisBlogThis!Share to TwitterShare to FacebookShare to Pinterest
Labels: Pike and Shotte


I caught this in Monday's online edition of the Guardian.

On a slightly different note I also found this trailer, with similar stunning visuals and equally impressive sound track.


This unit for my Sharp Practice Seven Years War project was in action a month or back in our first game, but I've never posted pictures of the unit itself. 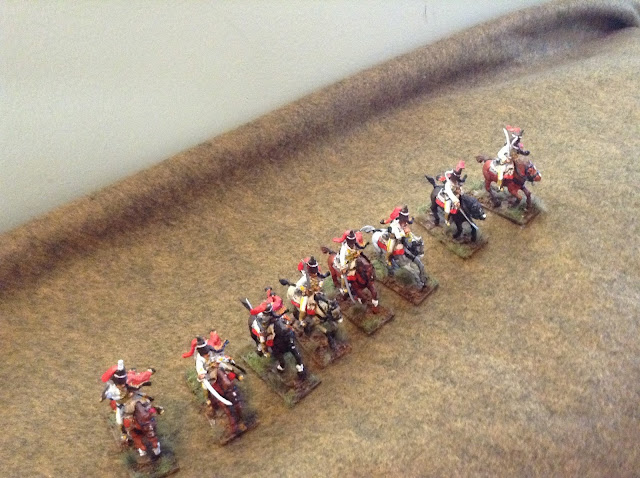 Luckner's Hussars were a Hanoverian unit and one of the iconic regiments of the campaign in Western Germany.  They were everywhere and heavily involved in the Kleine Krieg.  The figures are from the Perry Plastic box set of Napoleonic British Hussars.  So yes let's hear it from the button counters and war-games fashion police.  I had the box on hand, and except for the leg wear and shabraques the uniforms are pretty damn close to one another.  So yes officially, the shabraques should have the long swallow tailed corners seen on the officer figure instead of thew smaller saddle blankets seen on the other ranks.  And they should have the tight Hussar breeches with leggings and high boots instead of overalls.  I rationalize both of these by saying a hard run unit would have stripped down to more practical wear.  However, the fur hats, dolman and pelisse look spot on and the poses one gets from these perry figures are marvellous. 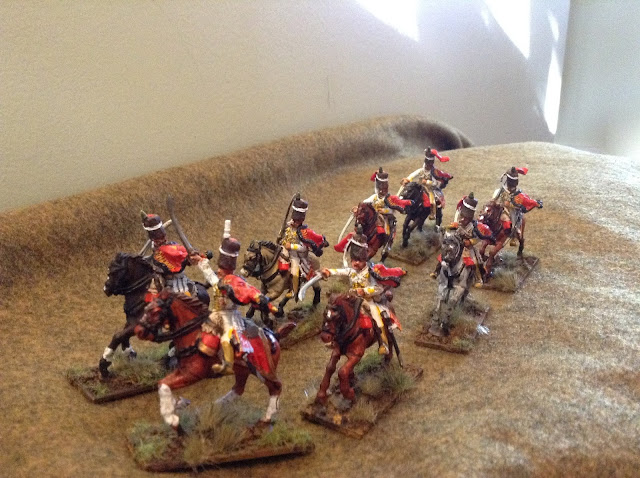 I've painted these figures (6 plus officer and trumpeter) in the later uniform, white dolman with red pelisse and fur hat, adopted in 1760.  The earlier uniform had a green dolman and pelisse and a  mirliton or flugelmutze, to use the lovely German term.  It was changed as it was nearly identical to that worn by the mounted members of Fischer's Chasseurs in the opposing French army. 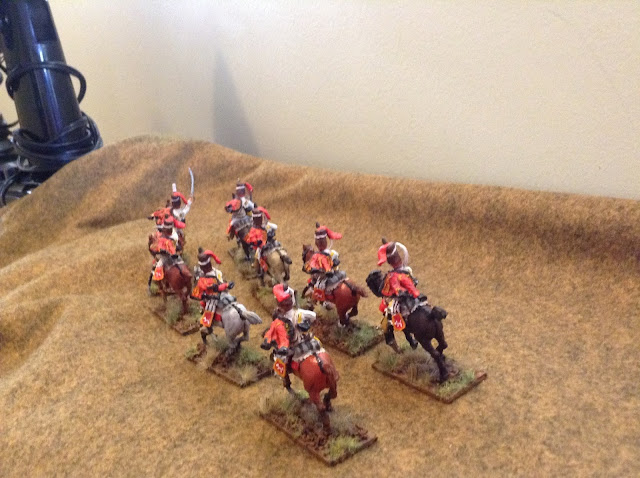 The regiment's colonel Nikolas Luckner is pretty much the poster child for Lace Wars Soldeirs of Future.  A full bio can be found at the excellent Kronoskaf site, but the basics are as follows.

You can't make this sh*t up! 
Curt and I were both planning SP games for this weekend coming, but he got his note out first so mine will wait a week or two.  But the thought process (my brain hurts) made me realize that I had not posted my thought son the rule system following my AAR a few weeks ago.  So here goes.

·         Overall things ran smoothly, and gave a fun game with lots of action.  The system is intuitive and we got into the swing of the play very quickly.  All good stuff.

·         I liked the unit/leader activation system which gave suspense and randomness without being too wacky.  We used cards, but long term I will use poker chips.  I found it hard to adequately shuffle a small hand of cards, much to Stacy’s disgust as he had to take several random event rolls following the appearance of the 3rd command card in a row.  If I don't get my poker chips painted in time (they are fiddly), I'll resort to fanning the cards and letting players choose one at random.

·         Getting the feel of when to use Command Cards will take a bit.  Stacy and Sylvain tended to hold on to them to make sure that units activated on the tiffin card, but I think that both made use of Cards for “Step Out” actions adding movement or prompted activations out of sequence

·         Movement is based on a number of d6s making it random, but that was just fine by me and it worked in practice.  Cavalry take some thought as they need to take a turn to slow down or speed up.

·         Small arms fire was a snap to get – lots of d6s with simple to remember scores to hit.  We rarely need to resort to a table.  If three men in their 50s don’t need reminders, the system is pretty idiot proof!  Units need to test to stop uncontrolled fire once they start, which is something that we forgot to do.

·         Artillery fire is also simple and can be deadly (or not).  Stacy cunningly placed his gun on a hill and Sylvain obligingly deployed on a hill in the line of fire.   In retrospect he could have avoided some of the fire by coming down off the hill but that didn’t seem obvious at the time.

·         I liked the differentiation between musket and rifle armed troops, and formed troops vs skirmishers.  Both sides’ skirmishers were effective, but Sylvain unfortunately turned his Jaegers rifles from a plus to minus by moving into close range.

·          Cavalry is brittle and tricky to use, as it should be.  Both players got their hussars into tricky spots where they were shot apart by musketry.  A learning opportunity hopefully!

·         We used a big table that allowed a lot of flexibility on deployment.  It also had the plus of letting both players get familiar with movement and activations before running into the enemy.  A few units on a big table gave a very nice feel.

·         As commented on the SP forum over at the lardies home, there are some unit points costs issues that need to be sorted out.  I went by the points in the book and may have given Stacy an advantage as the Brits seem overpriced.   We can work this out over time.

Ad in conclusion I can't wait til we go tho the Penninsula with Curt's lads this week and hiope to go to Hesse soon with my SYW lads.
Posted by Peter Douglas at 3:46 PM 3 comments: