The term is over, and the calculus papers are graded and recorded (it's all over but the crying).  Hurrah! Hurrah!


I finally made an appearance at the local monthly games night.  I didn't have time to put together a miniatures game but was happy to show up for the first time in a dog's age.  I was very glad that I did as I met a local gamer who has an interest in miniatures (sadly he's shipping back to Oz this summer).  We played a new game that has intrigued me in the shop. 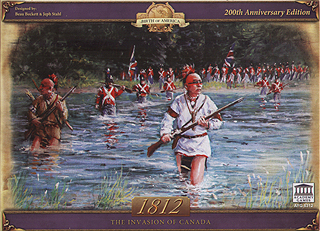 This is an area control game where there are 5 forces in 2 sides.  The British control the redcoats, Canadian militia and the Natives while the Yankee imperialist pig-dogs (excuse the bias here) have regulars and militia.  Each force has a move in a turn, but the sequence of play is random so that the US can move twice (i.e. the regulars and militia) before the Brits get to react wit their three moves (redcoat, militia and natives) or it can be more IGO-UGO depending on how things turn out.  Also, if a force moves and other allies in the area get to move at the same time.  So if a militia move from Prescott to Ogdensburg then any redcoats and Indians at Prescott also get to come along too.  I'm probably making a botch of describing this but it gives a game which is very fluid and has very strong ebb and flow  - much like the real conflict. 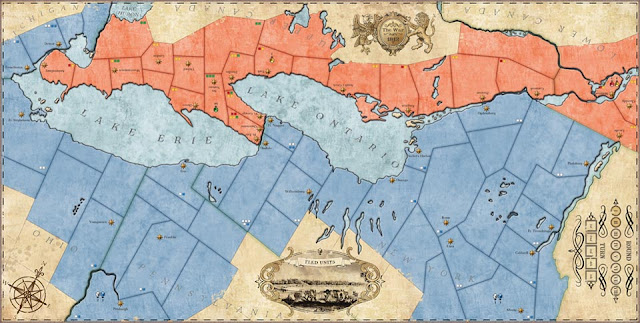 The map shows the familiar (at least to Canucks) frontier from Detroit to Montreal.  Ship based movement is allowed based on select cards which can be played if available.  The army units are small wooden cubes in appropriate colours.

One entertaining combat aspect is the the dice have "hit the enemy" results "try again but you can retreat if you want to" and "you run away" results.  I had a lot of fun letting Ian roll away and watching him lose more troops than I did!  Militia and Natives are prone to flee, US regulars less so and redcoats not at all.  Therefore a small core of redcoats can outlast all the others in a prolonged conflict, especially if there are militia or natives to take the casualties!

I won the war as the Brits, conquering Ft. Meigs in a last gasp attack where the redcoats prevailed while the US militia ran away.  It was a highly entertaining game that literally went down to the last die roll.


I then played 3 games of "Hey That's My Fish" which was at a level of intellectual challenge after 122 Math 103 papers.  I won once, game second once and third once in 3 person play. 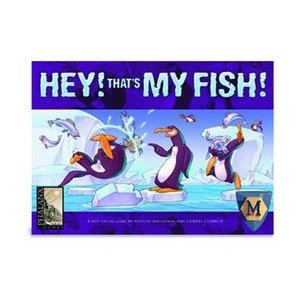 Email ThisBlogThis!Share to TwitterShare to FacebookShare to Pinterest
Labels: board games


Day three of marking in the bag, I should be done tomorrow mid pm.  Marking necessities include red pens, coffee, iTunes, walks, bag stretches twice a day, ergonomic marking table to avoid back damage, fire arm to deal with large chickens and dancing girls to keep me awake...(ok maybe a couple of those items are in my dreams)


It will be done by Friday night.
Posted by Peter Douglas at 4:38 PM 2 comments:

I met the chicken after spending the best part of 8 hours marking.  It's a good thing I wasn't drinking coffee at the time or I'd still be wiping up the spill. 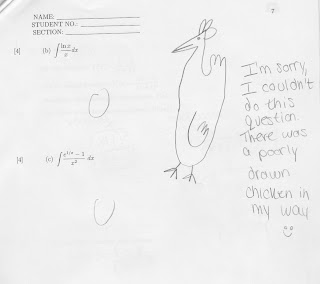 Light at the end of the Tunnel?

It's end of term and I've got 5 days to mark 120+ first year calculus exams.  Meanwhile it's 24C outside and a beautiful sunny day.  On the plus side I rode my bike to the Uni for the first time since the fall and it'll be over by the weekend (at which point my wife will produce THE LIST).
Posted by Peter Douglas at 1:03 PM 6 comments:

Found in the Cheap Section at Chapters 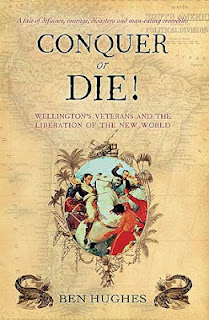 This was on a table in the overstock section of our "local" big box bookseller (the local independents having sadly closed shop last year, it's our only option).  It looks interesting and it's not a theatre I know much about although I remember covering Bolivar and San Martin in grade 9 history (or thereabouts, the memory fades).  It'll will be on the reading shelf once I finish the latest Ian Rankin.
Posted by Peter Douglas at 8:52 AM 1 comment:


Rossmac's post about terrain cloths got me thinking about my own cloths and then buying fabric in general.


Here's a couple of Canadian cultural icons to guide you through how to buy fabric.  For Yanquitos, Don Cherry is an ex-hockey coach and now TV commentator who combines John Madden's passion for his sport with Rush Limbaugh's sensitivity while Rick Mercer is a more left wing and funnier John Stewart.  Sorry I can't think of appropriate British equivalents.


Note that Don has a sewing club membership card to get a discount.

Posted by Peter Douglas at 9:19 AM No comments:


Ok, now that I have a working computer, I am able to blog again back on track.  Here's what I was able to find in the rubbermaid.

There Is Joy In Mudville


Meanwhile I've got a newer laptop and moved the older model down to backup/auxiliary command centre.  Since my laptop is my primary work computer, I tend to replace it every 2 years.  I was actually due for a new one, but hard drive failure accelerated the need!  Ditto the 1TB backup disk, on my list of "should dos" that were waiting 'til the end of term.

Will the Patient Live?


The latest update from the I-hospital - the new hard drive is fine but there is likely a problem with the cable.  A new one is due to arrive today and fingers are crossed.  I saw the patient yesterday and got my files for my classes this term (finals are on the 17th and 23rd and I need my files to create the exams!).  It's an intermittent problem now as on Wednesday there was no disk to be found but Thursday it was up and running no problem.  In fact when I walked in the shop, the techs were blasting my I-tunes playlist.  I'm sure my Beatles collection has been pirated!


Tuesday I bought a new MacBook (it was my primary university computer).  At first I thought that I over-reacted but now I'm not so sure.  She's a beaut!
Posted by Peter Douglas at 7:51 AM No comments:


Ok so the computer worked when I picked it up last night.  Ok I didn't actually turn it on but two techies said that it was good to go.  But when I turned it on this am I got a white screen of death with a single icon featuring a folder with a question mark.


So, after a couple restarts,  I grab my systems disk and try to boot off of that.  It starts up and wants to install OSX - ok at least it's forward progress even tho the boffins said that they did this yesterday.  Then I get the message that really put the sinking feeling in my stomach.  The install wizard came up with a standard "Please select the drive where you want me to install to the software"  only there are no drives to select from.


So it's back in the shop and I've got the fingers crossed.
Posted by Peter Douglas at 1:32 PM 4 comments:

The Hard Drive is Dead - Long Live the Data


Ok I win the too stupid to live award for the year.  On Saturday morning I fired up the MacBook, updated it's software then rebooted it to finish the install (no this doesn't win me the award).  Only it didn't reboot...it just hung with a white screen and made clicking noises.  The Iboffins tell me that its hard drive failure and that they can put in a new HD and reinstall the operating system...but no idea yet on whether the data can be resurrected.


Yes you guessed it - there is no backup!!!!  Yes I qualify for the above mentioned award.
Posted by Peter Douglas at 8:39 AM 7 comments:


Ok it's memory test time.  Let's see what I can remember about what's in the rubbermade...


The Imperial Forces
The dream list goes as follows 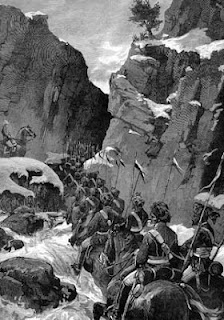 Native Forces
Again the list goes as such.  This is based on readings of the Sikh and Afghan wars.

Posted by Peter Douglas at 8:34 AM No comments:


Ok time to think what I need for Wascanastan (my imaginary nation subbing for the 2nd afghan war).


Geography
Wasacanastan is a independent state Northeast of Peshawar vaguely in the same area as Chitral and Gilgit.  There is a British Imperial polical and commercial interests, requring a residency.


Obviously it's a mountainous country with some swift running rivers and some lakes.  We tend to think of this area as being arid semi desert but Wikipedia articles show that there's some forests and greener pastures in the mountains (Peiwar Kotal was fought in a forest for instance).  The GWR (greater Wascanastan Railway) poerates but the mountains and lakes require a steamboat to reach teh residency. My model here is as follows. 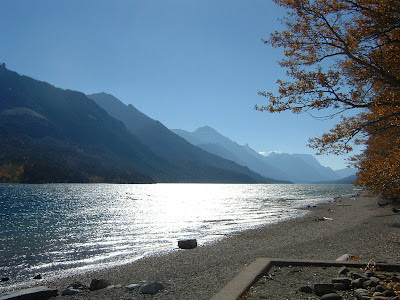 This is Waterton Lake Alberta, no where near the Northwest Frontier but part of the Nowest Territories 100 years ago!  A big long lake in high mountains close up on arid foothills in the middle of a large continent - sounds familiar doesn't it.  The far end of the lake is in Montana and there was a steamboat that used to run rich Yankees up to a very post hotel from a Great Northern Railway station the other side of the border. 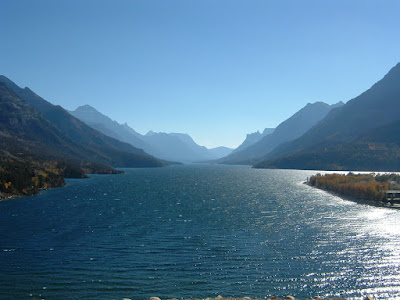 It's Official I'll be Heading Back to Wasacastan


The votes were tallied this weekend and Afghanistan 1880 it is.  It's the last couple of weeks of class and I've been knee deep in marking so I've not had much time to post.  Details to follow, once I open up the Rubbermade and find out who's who in the zoo.
Posted by Peter Douglas at 6:57 AM No comments: