As part of the Challenge wrap up Curt asks us to post a group shot of everything completed.  Here's mine.

Ok I am very, very late in posting this.  I don't even have a good excuse like Paul, although many claim that I am at sea most of the time.  However, all my Uni exams are marked and recorded and it's all over but the crying so I finally got round to posting these photos that were taken a month ago. 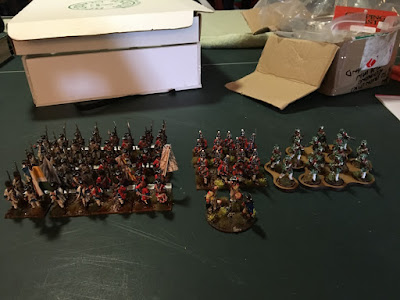 Here's the group shot of most of what I did this winter - all of my SYW figures.  Touraine and Diesbach regiments on the left, Royal Welsh Fusiliers behind the musicians in the middle and Fischer's chasseurs to the right.  Missing are my 1;1200 planes which wouldn't show up well in this wide a shot (ok I forgot about them), and my Curtgeld which has been delivered in tribute. 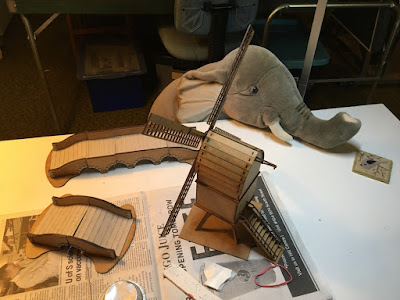 I'd been in the modelling doldrums since mid-March as end of semester came on me.  However, lately I've been picking up the brush and glue.  Here I am with three pieces of terrain I put together last week - three very enjoyable evenings spent in from of the TV building Sarissa Productions kits.  There are two bridges (with three additional spans) and a windmill.

Posted by Peter Douglas at 12:45 PM No comments:


A few weeks ago I ran a WW2 Naval Game at Curt's house for our local group.  It had been nearly 3 years since I did a naval game and 3 1/2 since my last WW2 Naval, so it was good to get the ships out.  It was a night encounter off the coast of Libya with 4 players and no-one knowing who the other parties were. 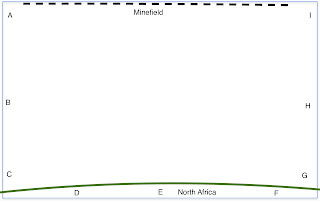 The Italians had a convoy with a close escort of 3 destroyers who entered at the northwest corner (between A and B) and had to exit via the southeast corner (between H and G).  They were slow and zig-zagging so took a long time to get anywhere.  There was also a long range escort of 3 cruisers plus 3 more destroyers who would enter later on the western board edge and who had lost touch with the convoy, but had the mission to provide escort.  There was also Fort Corleone near point A with shore batteries (battery Sonny and battery Fredo).

Stacy had HMS Manxman, a fast minelayer plus an escort of 2 destroyers would enter from the North East (H:I) with a mission to lay mines between B and D.  They also had a covering force of 2 cruisers and 2 destroyers.  The cover had not contacted the Manxman as yet but would enter between H and I and bombard the shore between E and F to provide a distraction.

Each side pre-plotted their moves in advance and sat in another room while I maneuvered the ships and provided sighting and/or radar info as needed.  It all worked well with the Minelaying force getting a radar fix on the convoy but ignoring it to get onto their own business.  The two british groups also correctly identified themselves early on.  The Italians also correctly ID'd themselves but it took longer.

As is common with night games things got hot and confusing once firing started.  Curt's british cover group opened up on the shore and took return fire from the shore batteries.  Sylvain's Italian escort met the British minelaying group, but shooting honours were even and Manxman laid a lot of eggs.  Once the firing got going, Curt ran west and opened up on Sylvain sinking two cruisers while taking damage on his flagship.  Meanwhile Jeremy's convoy tried to avoid the whole mess and was on the whole successful at this.


i am over a month late posting this, which appear on the AHPCVIII blog back when even my calendar said it was winter (before the Spring Equinox) 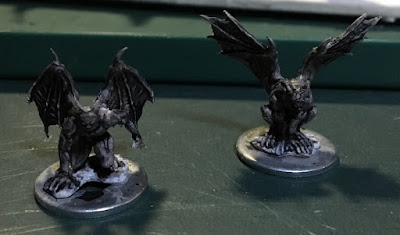 Well I had a gigantic challenge fade at the end and so there are several projects in various states of completion that will be finished afterwards.  Included in the mix is my Curtgeld, all done but the bases.  However IIRC, the Challenge rules state that I can leave the bases unfinished for Curt so that's where we'll leave things. 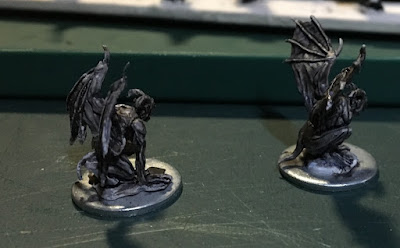 I am a historical gamer so I don't do monsters as a rule, but I picked up theses 28mm D&D plastic gargoyles from the local game shop and I reckon they'll do as Curtgeld.  I tried to do them to match the greyscale effects that Curt gets, which I figured would suit the gargoyles. 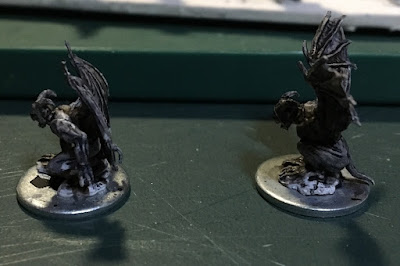 The challenge fade mostly had to do with the final 8 Royal Welsh Fusiliers which include two standard bearers and two musicians.  These gave me many headaches - false starts, dropped paint sticks, do overs the whole shooting match.  I've finally broken the back on them but they'll have to wait till after the challenge.  Also in the background is the start of a Hessian unit, which I began after much frustration on the Fusiliers. 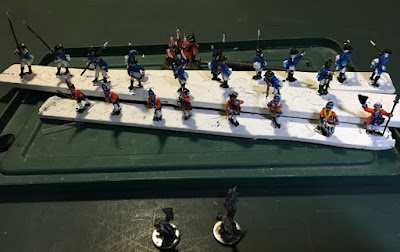 As for the title, I know Curt is a fan of the Muppets and this is one of my favourite Muppet Shticks - Angus McGonagle the Argyle Gargoyle Gargling Gershwin!  With the Snowlord being a traitorous, murdering, scheming bastard who sold his country out for Dutch and German kings Campbell, it seemed appropriate.   Plus it includes Mark Hamill in an argyle sweater.