So we fought out the second battle of Halle yesterday and evening (1:30-10:30 pm), and it was a WWF wrestle mania of an affair featuring the entire French army, all of the surviving brigades of the Anglo-Allied army and almost all if the Prussian army.  There were about 300,000 troops represented on a huge battlefield.

And it went like my dinner.  We ordered pizza from a national chain, and I risked a pizza that met my dietary restrictions on paper (gluten free and milk free).  But something bit me back and it turned into a religious experience involving much prayer at the shrine of the porcelain goddess when I got back home.  And that is kinda how the game went... down the flusher...

For the second day in a row the Anglo Allied army took on the bulk of the French army on a flat Belgian plain devoid of shelter or terrain.  This time Boney set up a Grand Battery and used a cavalry threat to force me into squares.  They were vaporizing a brigade a turn, while leaving their infantry out of musket range.  They obviously learned from the first day when the redcoats' fire was deadly.

The Prussians arrived in force, sooner than expected and much closer to me than I expected, but Boney was able to screen them and focus on me.  Meanwhile, aided by my atrocious activation rolls early on and a triple epic fail on a cavalry charge later on, the column led by Ney moved off board to threaten our supply line. 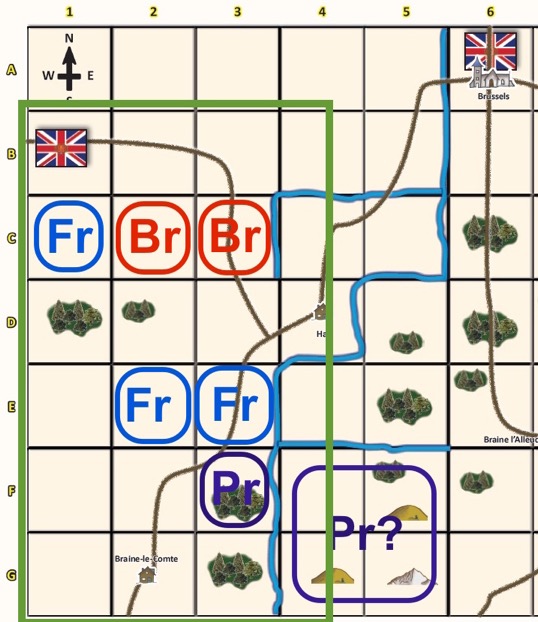 Curt has got out the "Honey I Shrunk the Kids" machine and downscaled the armies by 1/3 (see the post) to fit the entire thing on one 4x8 foot table.

The French can win the whole thing in four different ways.

The allies can win by avoid all of the above, or by knocking the French army out of action permanently.  As Curt has noted, all three armies have been knocked about a bit and could be crippled today.

In the first days action (AAR), the Anglo Allied army faced the full French Army and was forced to retreat North, while Ney took a column off table to the west and threatens our supply chain at B1.  Meanwhile the Prussians missed their appointed date with Ney en transit and showed up just as the Brits broke.  Boney has the main French force facing the Prussian advance guard to the south of Halle.

I have a really good idea of the French numbers and locations and only a foggy knowledge of the Prussian numbers and location (this was a constant theme during the campaign).  I have been assured that they will appear and cross the river between Braine le Compte and Halle, but Santa Claus and the Easter Bunny might also appear at the same locations....
Posted by Peter Douglas at 9:07 AM No comments: 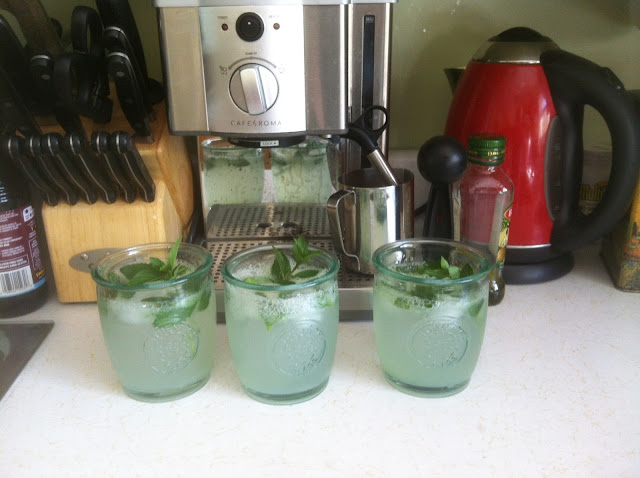 We are having the hottest weekend so far this summer, with temps at 30C with the humidex at 36C and now a Tornado watch.  For those of you still measuring distances in medieval Kings' body parts and temps based on sick Germans, I don't know the translation to Farenheit.

So we went for the modern reboot of18th Century Naval Grog -Mojitos.  Actually the recipe is not that different: rum, sugar, soda water, lime, mint.  Very refreshing, and the mint camefrom the garden.
Posted by Peter Douglas at 4:59 PM 4 comments:

With our 100 Days Campaign close to winding up, I thought I would look back on some key decision points based on the information available to me at the time.  To start with, I will revisit the lead into and follow up from the Battle of Placenoit.

The map below shows what the Anglo-Allied army knew and saw after the action at Placenoit, but gives useful references for the lead in.  Note that a column can move 6 squares/day by road, 3 if moving cross-country.  Also a standard battle would set up a 3*2 set of squares on a 6*4 table. 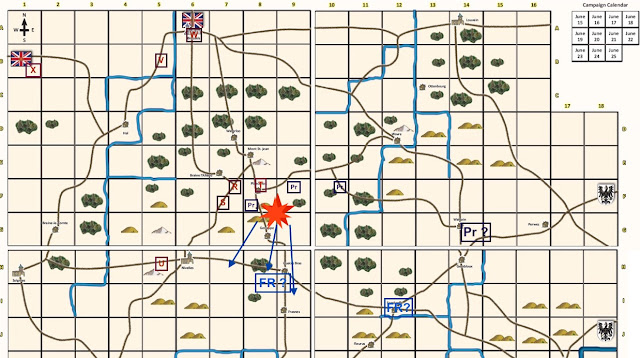 The campaign starts about ½ way through June 15 and the Anglo-Allied forces are essentially spread all over the place. We had two small columns (R and S on the map) at Nivelles and Quartre Bras.  Wellington entered at Brussels with a larger column T and our cavalry enters on the west end of the map as column U.

For our army, the early objectives were

I wasn’t sure what to expect from the Prussian, but figured that Blucher would be on the road south east of Mt St Jean with a column of Prussians.   As the morning of the 16th played out, the French moved North and the various Anglo-Allied forces closed in on a junction at Placenoit.  There was also apparently contact to the east as French columns moved on Prussian forces at Sombreffe and then towards Gembloux.

However it was the Prussians who caught us all unawares as they shifted most of their army west and had moved into Placenoit before any Anglo-Allied troops could.  Under the Blucher system up to two columns from the same army can occupy a square, but columns from two different armies cannot (except for during battle).  So since the Prussians won the foot race, the Anglo Allied columns got pushed aside and our plans to centralize our forces got postponed.  Also, it meant that only one of my columns (T) got to take part in the action as the French came north to Genappes since columns R and S were elbowed off to the west by the Teutonic hordes.

I have blogged on the action at Placenoit earlier, but have some afterthoughts given what I know now.

In fact Curt has since confirmed that the combined Allied forces had the French outnumbered at Placenoit.  However to have a chance of success I think three things had to happen.


Apparently the French was scared by what they ran into because they pulled out overnight.  Curt’s map above shows the situation
Posted by Peter Douglas at 11:16 AM No comments: