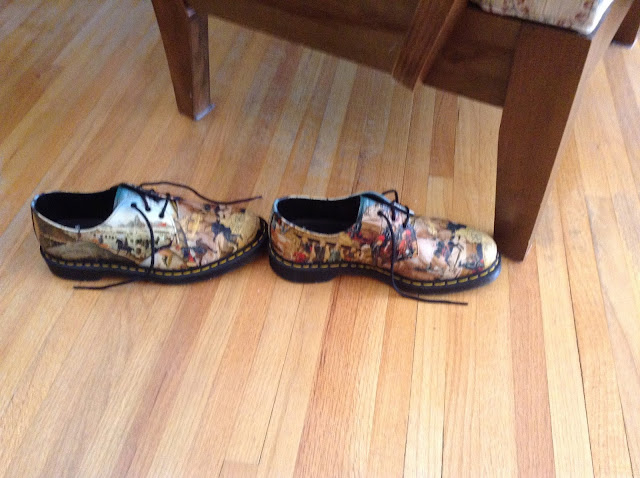 It is not often that one can claim that one has the army to go with one's shoes, but I have succeeded.  I present Exhibit A, a pair of Dr Martens emblazoned with Renaissance Italian Condotierri.  The art work is D'Antonio's Triumph of Camillus (original in the National Gallery)

These were acquired during our sojourn in the UK last month.  I originally saw these during our four day stay in London on arrival, but balked at that time.  However with encouragement from my wife and sister in law I went back during our London segment of the return journey from Bedford to Southampton and voila.  They became my father's day present from my wife, and a damn fine one they are at that. 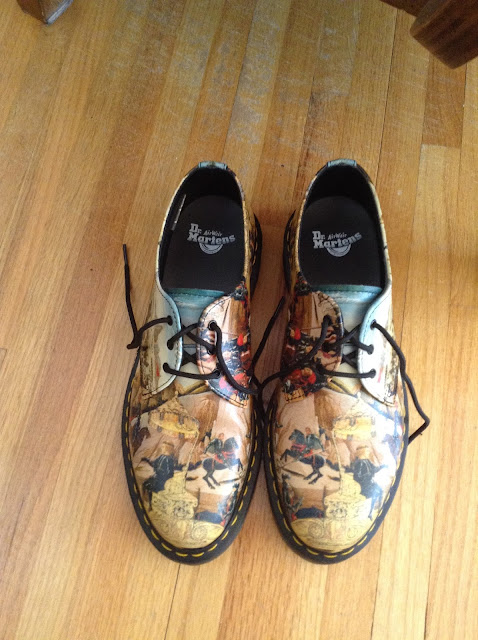 And for the record I have worn them in public twice so far.  Once to supper at a Thai restaurant in Marylebone immediately after purchase and then again at the local theatre in Regina.  Londoners of course paid no attention to them, but I did get catch some odd glances from fellow theatre goers - I figure that it's good for them to stretch their horizons a little.
Posted by Peter Douglas at 3:23 PM 14 comments:

Email ThisBlogThis!Share to TwitterShare to FacebookShare to Pinterest
Labels: silliness


This week our local group had a first game with SP2 and using my SYW force.  The scenario was a recon action based on Scenario 13 Finding the Ford from CS Grant "Scenarios for All Ages".  Two forces of equal strength arrive at opposite corners of the table.  A river crosses the table from left to right, which is unfordable except for a rumoured ford that the players must find.  Victory goes to the side that holds both banks of the ford at end of play.

Sylvain took the Anglo-Allied forces with 4 groups of British infantry, a group of Hessian Jaegers and a group of Luckner's Hanoverian Hussars.  Stacy took the French with 4 groups of infantry, a group of Fischer's Chasseurs and a groups of the Bercheny Hussards.  The red coats and especially the jaegers had a higher point value than the French equivalents.  Therefore I upgraded two French infantry groups to Grenadiers and gave Stacy a light gun.  Adding a musician (Jaeger hornist) to the allies gave an even point total.

We used Sylvain's terrain boards which are 4'x2' in dimension.  To get the river mid table we ended up with a roomy 8'x6' table, well over the minimum 4x6 that the rules recommend.  In retrospect the extra table was a great thing as it allowed for a lot more maneuver.  The initial turns gave us all a chance to get used to the turn sequence and movement rules and make the inevitable rules screw up when it didn't matter so much.

As umpire I noted 6 possible ford locations and rolled a d6 to pick the actual ford, without revealing any of these to the players.  Units that were next to the river and allocated 1 of their 2 actions/turn to searching would reveal a 12" stretch of riverside.  The searching gave rise to some humourous moments particularly on the French side.  The Hussards were leading the way but always rolled down for movement while the Chasseurs always rolled high and were close to lapping the Hussards before the later finally located the ford directly to their front.

Stacy got the Chasseurs, Jaegers and a formation of regulars (two groups) across the river before Sylvain arrived in force, while the French gun set up on a hill and worried the Redcoats.  Both sides threw their cavalry away to get shot up by infantry and then it settled down to an infantry shoot out.  Aided by their gun and with fortunate and judicious use of command actions and cards to rally shock, Stacy's frenchmen won the shoot out and Sylvain's redcoat retired voluntarily.

Thoughts on SP2 to follow in the next few days.

My second completed unit for my SYW Sharp Practice Project is a group if Hessian Jaegers.  There are 6 rank and file and one officer.  Once again the figures are from the Perry's AWI range.  Actually the figures were painted a year ago, but needed to be rebased for as singles letting my Bercheny Hussards have the honours of first SP unit completed. 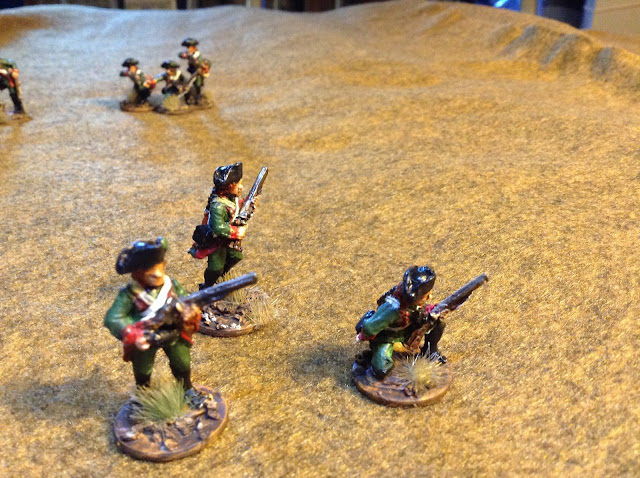 I might have pushed historical accuracy with using AWI for the hussars, but here are no issues with the uniforms here.  The Hesse-Kassel continent wore essentially the same uniforms in both the SYW and the AWI. 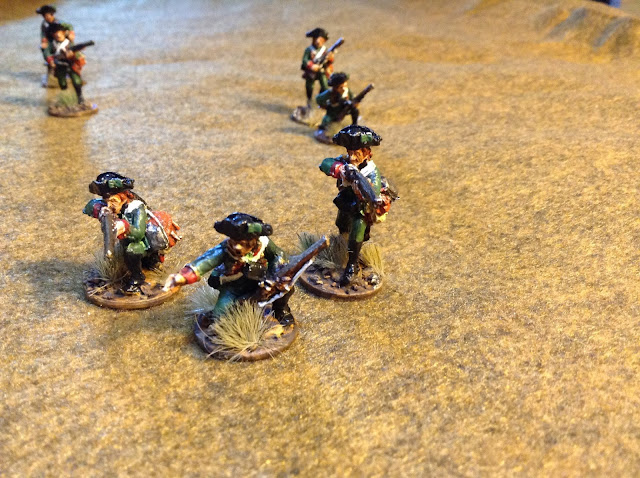 The first unit completed for my Sharp Practice Kleine Kreig project is a group (squadron) of the Bercheny Hussards, the oldest Hussards regiment in the French army.  The regiment was founded by a Transylvanian Count Bercheny and the Colonelship stayed in the family until the Revolution.  The uniform of Sky blue dolman and pellisse with red and blue mirliton is quite natty looking. 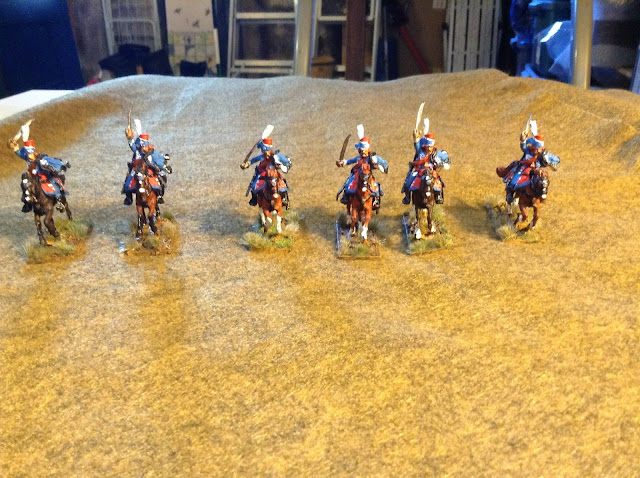 This unit was over a year in the completion.  I originally bought the figures for an aborted Maurice SYW project, which I put in hold due to cost worries.  They sat half finished for about a year, and were finished in May just before we went to the UK.  Hussars in general are among the most finicky figures to paint, and Seven Years War era hussars felt worse than most.  Finally I got them to the "that'll do pig" stage. 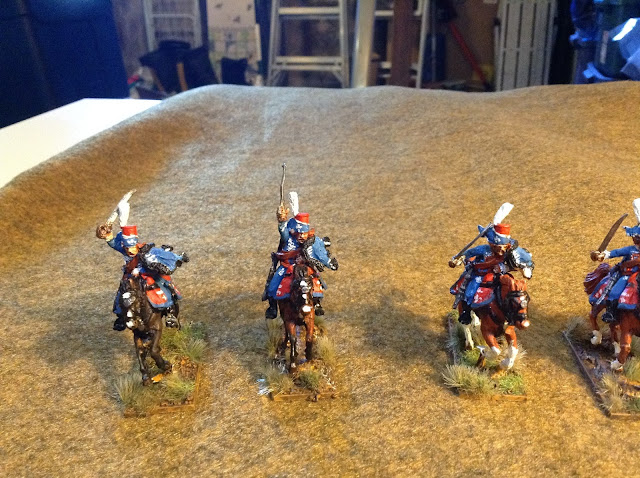 The figures are from the Perrys AWI range.  The wargames fashion police (WFPD) might give me heck on that but the uniforms are very, very similar to SYW era troops and the Perrys don't do SYW.  Also uniform cuts and patterns are much less doumented than for the Napoleonic era, so the exact cut of the cloth is not clearly defined.  Anyway they have the requisite uniform pieces - dolman, pellisse, tight britches and rediculously silly hat! 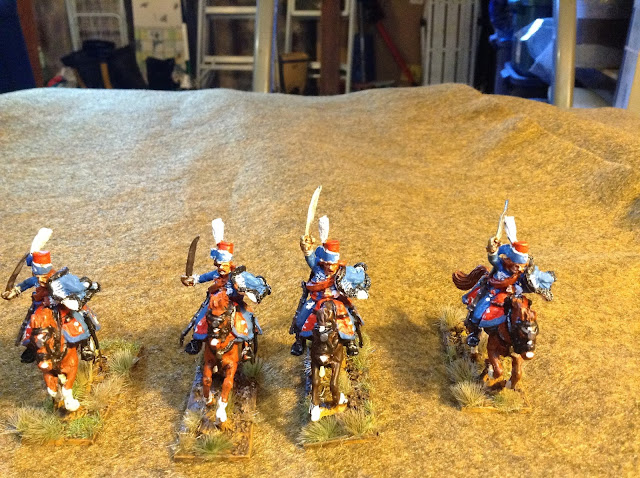 The Perrys are my go to figure manufacturer for a variety of reasons.  Customer service is top rate, they consistently are able to deliver figures to the Canadian wilds in quick order without over charging for postage plus they don't charge VAT on overseas orders.  Also I love the poses for the variety and the realism.  It seems quite popular to bash the Perrys on the level of flash on their figures, but I don't find that a problem at all.  It may be that I am less fussy about it, don't notice or am just used to dealing with crappy casts!  Or it could be that I fame in obscure periods that no sane individual could give a rats ass about.  Any way I like the figs and am quite pleased with the end result. 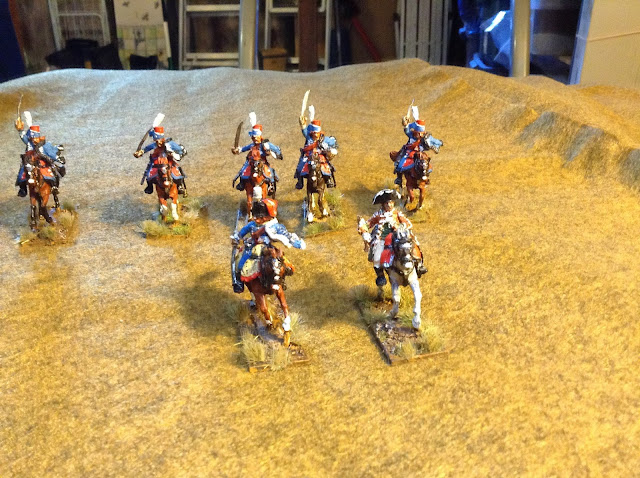 There are 6 troopers, officer and trumpeter.  The officer wears a fur busby in place of the mirliton and has a leopard skin shabraque.  Officially he is supposed to have a mirliton, but being hussars the officers apparently wore what they wanted and typically this was a busby!  The trumpeter just to be completely different wears a brown long coat and tricorne! 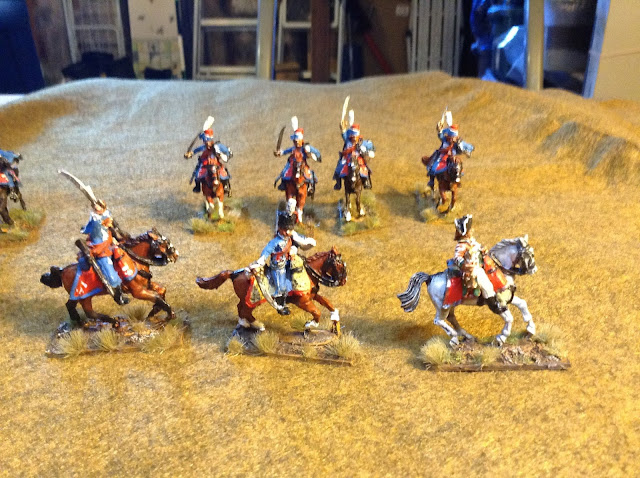 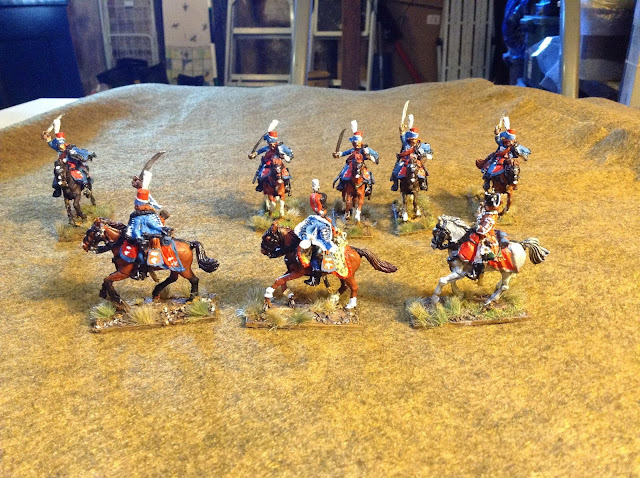 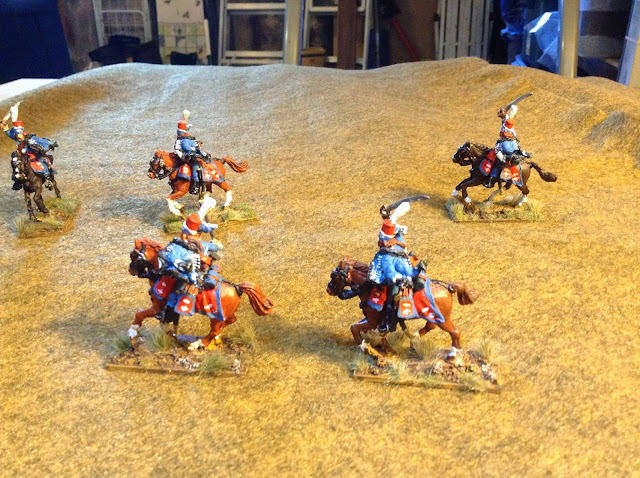 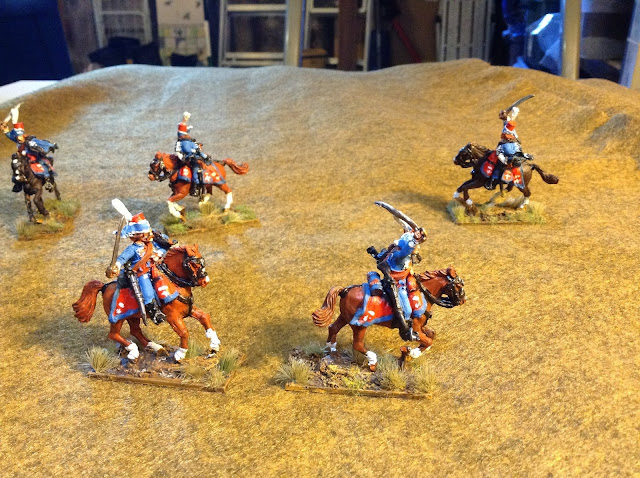 Back from the UK

My wife and I just came back from a two week visit to the UK.  This was an almost exclusively family and couple based trip with little of wargaming interest.  We visited my Dad near Southampton, (who I had not seen for two years and my wife for six years), and my wife's sister in Bedford who we had not seen in six years.  We also spent some time in London.

Wargaming events missed while in the UK included Partizan, a Jutland centenary re-enactment game and likely many other chances to catch up with UK based gamers I had met through the inter web.  But we were in the UK for two weeks and well family trumps gamers.

One of the highlights for me was a three day sailing trip with my dad, almost certainly the last one before he sells his boat.  We went from the Hamble River to Yarmouth on May 24th, to Leamington on May 25th and returned to the Hamble on the 26th.

Yarmouth Castle was built late in the reign of Henry VIII, but lacks the distinctive round style of the other Henrican Fortifications along the South and East Coasts of England.  It was used until 1885, it's purpose of course being to scare off the beastly French.  I did not go into the Castle this trip (I wanted to but missed the entrance before closing) but have in the past.  It is a classic small artillery fort that would be a feature in a small war-games action, on land or by se or both.

Let us look at the forces involved.  In the Red Corner on the Allied side we have:

Meanwhile in the Blue Corner, on the French side we have

All good and colourful stuff.  And the actions in the Kliene Kreig - the stuff of Charles Grant scenarios.  Bridge demolitions, raids, ambushes, river crossings the whole shebang.