The Aragonese forces consistantly rolled badly on the activation rolls, crawling on one move per turn thanks to the column formation while El Cid had the Zaragozan lights scampering through the village in no short order.  Pedro blames Stacy's infantry column with it miserable collection of priests, women and other baggage for the delays.

El Cid fully capitalized on the delays on the Aragonese side and caught Pedro's cavalry before they deployed fully (Pedro accepts no responsibility for his deployment!).  The Araganonese lights opted to stand and fight the Zaragozan heavies rather than evade off table - and were routed off table!  The Andalusians carried on to hit the Hidalgos.  The initial clash favoured the Hidalgos, but heartened by El Cid's prescence the muslims held.  Meanwhile Pedro flubbed his command roll trying to convince the Caballeros Villanos to charge a unit of Jinetes, which also meant that Pedro could not join the Hidalgos in melee.

While the horsemen crossed swords the foot sloggers made for the objective - the village.  Sylvain's crossbows got there first, but Stacy's militia and archers were not far off, and each side occupied one half of the village.  Stacy's militia fought well and resisted a charge from the heavy infantry, and his crossbows resisted a charge by a unit of Jinetes.  However, the battle was decided by the cavalry fight (as it should be in 11th century Spain!).

The luck of the dice favoured El Cid, whose personal presence turned the tide of the melee.  Victory went to the Zaragozans, who broke the Hidalgos.  However, the suffered enough to warrant a test themselves and were also broken.  Pedro's division now had lost two units out of three so were broken and the Caballero Villanos retired off table.

This was my first game with the HC/BP  system and while I might tweak things a bit I liked the way it worked. Medieval troops should not be to reliable and should be liable to run off ahead of supports or lag behind.  Also the unit system fits the Grant teaser scenarios nicely.

In the end it was a fun game, with honours for most players (Pedro aside).  Photos from Curt are uploaded below.  Curt provided the natural terrain (mat, vegetation and hills), while the buildings, troops and sheep are mine.  Toys are a mix of Gripping Beast, Perry and Crusader figures, with  scratch built buildings and store bought walls. 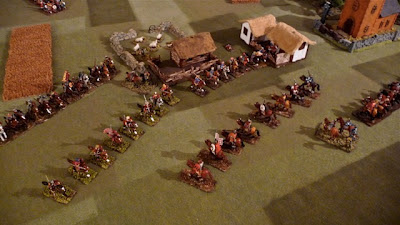 A couple of the rejects (see Don't Throw a 1)  started this trail earlier this week, and now I'll have a go/

I have dabbled in many, so could pick from many.  However, the one I come back to most often is WW1 and WW2 Naval.

2.       Next period, money no object?
28mm Peninsular War (time constraints  would also have to be overcome!)

Nelson (ok he's a general of the sea!).  Also the most interesting.  This bio of his early years is very interesting, as it shows where the Royal Navy was before Nelson (i ends with Cape St Vincent)

With MacDuff to the Frontier or variants and precursors thereof.  They've given me more enjoyable games over the years than any others

I don't follow sport that much, but for professional sports it's baseball and the Boston Red Sox.  Otherwise, winter Olympic sports and team Canada.

Late 1914 so I could give Beatty a boot in the rear and teach him how to signal properly!  Or to have dinner with Buonoparte on the inauguaral serving of Chicken Marengo!

As a celiac, it would be tempting to order something with a ton of gluten in it 'cause no one would care how grumpy it made me!  However, I'd rather go out feeling less than completely wretched so I'll go with
Grilled Bison rib eye medium rare
Baby new potatoes
Grilled vegetables
Portobello mushrooms
A really god Spanish red wine

On the grounds that this is strictly fantasy, Emma Peel.  In real life, I couldn't do any better. 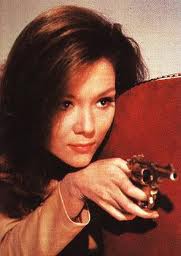 Hugh Grant or John Cusack - I'm told I share the charming ineptitude of the characters that they typically play.

I don't do comic books per say, but closest would be. 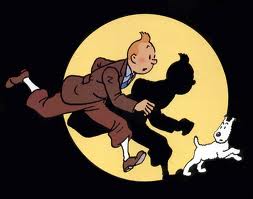 The exchange between Czar Alexander and Kutuzov on the morning of Austerlitz
'Mikhail Ilarionovich! Why haven't you begun your advance?'
'Your Highness, I am waiting for all the columns of the army to get into position.'
'But we are not on the Empress's Meadows , where we do not begin a parade until all the regiments are formed up!'
'Your Highness, if I have not begun it is because we are not on parade, and not on the Empress's Meadow. However, if such be Your Highness's order. . . .'

A game with Ross Mac, using SYW his French vs. Prussians.  We played the CSG Broken Ground scenario with Ross defending and me arriving on table in column.  He took a cavalry heavy army and launched a counterattack before I deployed my column.  My Feldjagers were wiped out, my Frie Korps scattered but the Death's Head Hussars died gloriously to give the infantry time to deploy into squares so that they could hold out until the heavy cavalry was brought up from the rear of the column.

20.   The miserable Git question, what upsets you?

Getting Back on the Wagon (Hopefully)

I've been way from the painting and a game but am hoping to get back to it this week.  I was out of town for a few days on a conference, then spent a week taking out a stubborn hedge from our backyard   (and didn't have the energy for much more than reading in the evenings) and then my teenage daughter was home for her one week stop between camps.  Oh yeah and there was some sporting event on TV every night for a lot of that period!

Possible projects to look at include

However, the winner should be hauling out the El Cid era Spanish and Moors to check their status for a trial game of Hail Caesar.
Posted by Peter Douglas at 8:58 AM 2 comments:


A comment rail on a recent post over at analogue hobbies moved off on a tangent on painting highlanders.  I'd be interested in hearing how others conquer the kilt.  My personal approach has always been to forget the details and get the big picture right.  While the actual tartans have a lot of detail up close, from any distance when the kilt is being worn and thus moving constantly, the details merge into a blur of earth tones.  Therefore I treat a tartan like a camo pattern - a base coat with a regular semi-contrasting blotchiness on top.  If I get a checkerboard or line pattern into the mix, so much the better but I certainly won't beat myself up for not getting them if the overall looks good from a distance.

Somewhere in in a rubber maid in my basement I have 25mm colonial highlanders from 3 regiments, 2 in kilts and one in trews.  If I get a chance to dig them out and take a photo I'll post them later.   Until such time I'll make do with the following historical photos.

U boat in Labrador
Posted by Peter Douglas at 8:20 AM No comments:


I spend 3 days at the Actuarial Research Conference in Winterpeg last week.  Unusually for a conference it was within driving distance (590kms) so I took a car to save shekels and to give myself added mobility - i.e. hit some games stores and bookstores!

I picked up some flaming wreckage from Game Knight, since I was so impressed with Curt's for our Tariga convoy game.  Otherwise, there was limited historical stuff but good board game materials available.  Interestingly enough they also have a section of the store devoted to wine and beet making.  Personally I've found that wine and games are offsetting hobbies instead of being complementary - but what ever floats your boat.

Better yet for me was the flagship store for McNally Robinson Canada's largest independent bookstore.    They also believe in combining vices, as they have a very nice restaurant on site!   Find of the day for me was this book, a title I failed to purchase at my local big box last year (and ruing the decision ever since). 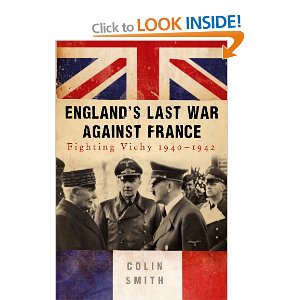 Smith gives a really good look at the political background before and during the war.  I also love the title, which sounds like it should be about Waterloo (or Crimea if you're Raglan).
Posted by Peter Douglas at 9:00 AM 8 comments:

Vintage Naval Ships in the News


I found this on the CBC's website today.  There's a typo in the article, as HMS Raleigh is described as a battlecruiser not a cruiser, but it's an interesting read.
Divers to Document Wreck


The Hawkins class were on the odd duck side, having been too late for WW1 and being an evolutionary dead end by the time WW2 arrived.  Curiously two of the class managed to run themselves around (Raleigh off Labrador in 1922, and Effingham in Norway in 1940), a rare event for 20th century warships.

Posted by Peter Douglas at 8:13 AM No comments: