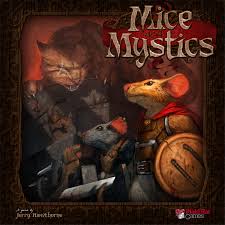 It's been a while since I've posted.  The challenged wrapped up but end of term ramped up and them we went off to Banff for a weekend.  So no painting or mini games since late March but I've played several board games.

For my birthday earlier this year I requested a copy of Mice and Mystics, which we have now played a couple of times.  It's a cooperative dungeon crawler game based on humans who have been changed into mice.  It got good reviews on line and I figured it might make a good "bridge" game to play with my family and or game group.  So far it's been played twice with games and not with my family.

There's a story line linking a series of scenarios.  Most of the heroes are loyal subjects of a king who's been done in  by treachery and an evil sorceress.  The try and fight back and have a series of missions related to  rescuing the king while battling minions (rats, spider and centipedes) while dodging a crow and the castle's cat.  It's a quick game to pick up and a lot of fun with good challenges and really nice storyline elements and flavour.  The currency is cheese, there's a ring of cat strength, a mouse that trips a mousetrap takes a hit but gets a cheese etc.

It gets two non-opposable thumbs up from me SQUEEK!