Last challenge entry and another set of problem children here, with an 8 man unit of 28mm Italian Gendarmes on barded horses for my Italian Wars project.  This will extend my lead in my Renaissance Men side duel with Curt, but not by enough he pulls off his 32 man Landschneck points bomb. The figures are of course from the Perry miniatures plastic box sets. 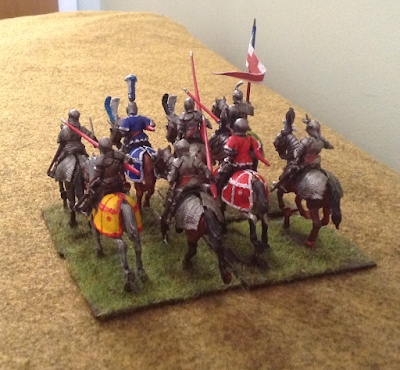 I started assembling these guys in December, but they kept getting sidetracked by other projects.  The barding proved fiddly and I am still not happy with it.  A horse or two that I was happy with got requisitioned for commanders etc, etc. 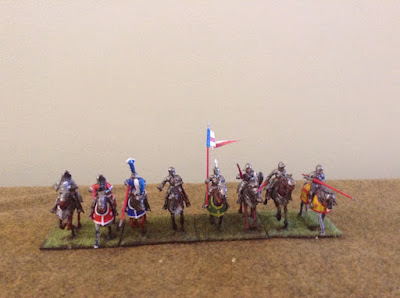 When it came time for painting there were other issues, mostly between the chair cushion and the paint brush.  The gothic, metal barding was too...metal, and I had trouble getting the effects right.  I did the other barding as fabric and that proved fiddly too, plus I made the mistake of using yellow on two of the four sets.  Next time I'll try steel armour with gilded highlights.  Not my best Italian Wars unit by any benchmark, which is a shame as they should be the cream of the crop.  But I'm done fussing over them and am glad to get them out of the queue. 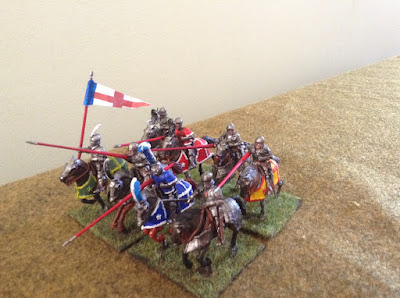 Originally I was going to give them the flag for the Sforza Dukes of Milan, but I didn't think that they were up to snuff for that role.  I went with a generic Cross of St George pennant.   The last issue came with basing. it turns out that I ran out of the plastic Revendra based I was using for Cavalry, so I had to resort to card.  I didn't want to risk heavy paint and acrylic gel on the card for fear of warping so went back to older flocking styles, with an eye to rebasing on plastic or wood alter.  I used Static grass with a blend of two army painter boxes and in the end it doesn't look half bad at all.

I had a lot of fun on the Challenge and really enjoyed my minion duties on Monday.  As always I've learned a lot and been tempted by a lot of projects and ranges.  Good work everyone, and I'll see you next year. 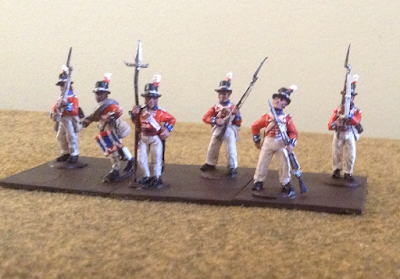 At the end of the Challenge I was  at the point where I was struggling to get a couple of problem children ready for the big night.  First up, the set of 6 Royal Marines for my War of 1812 project.  These guys took me on quite a ride.

I missed two theme rounds with Epic Failures.  My 1:2400 scale Rock of Gibraltar eroded away and my Mousling Lovers had a primer failure.  Going into the Nautical Round (3 weeks back) I decided that I needed a back up plan to the Sternwheeler.  So I started a unit of 12 (yes 12) Royal Marines.  The figures are mostly Perrys with Brigade (ex-Victrix) metal additions, in the form of a drummer, sergeant and a bunch of heads with round hats.  They first gave me headaches as the heads kept falling off.  After much reglueing I had one stick of them (I mount figs on sticks and had 2 sticks of 6 figures each) were good to go and I had them painted by last weekend.  The second set were being problematic, but I got them in order this week and sat down to finish them this morning.  That's when I realized that I had miss glue the backside of the Perry officer - yes you need to glue on the officer's coat tails in the appropriate length for the era you want.  Hence the half-assedness of the unit.  I was in the process of removing said backside and applying a quick Facto fix when I dropped the stick of 6 figures, so the set of 6 is back to the workbench.

So anyway I based the 6 finished figures and left space for their AWOL brothers in arms.  I will give them proper basing when all are mounted, but have gone with a minimal base brown  for today. 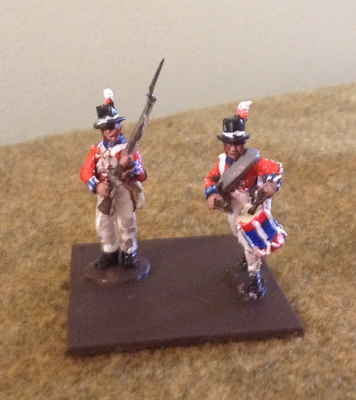 The Brigade (ex-Victrix) head are nice, but suffer from the c1969 fu manchu sideburns of all Victrix Nappys.  The drummer and NCO are really nice.  I think that there was an officer, but he got repurposed into another unit or command stand.  The round hats are meant for the Marines but do equally well for British expeditions to Egypt, South Africa, Argentina or the Caribbean.  Or for an army of leprechauns for that matter.  Things might have gone better if I had used Victrix bodies, but I like the Perry's better.

I took the canteens and cartridge boxes off of Perry backpacks (since Marines went without packs) but should have also done a better job trimming off the straps.  Of course had I used Victrix figs, the bodies have the canteens and cartridge boxes and only the packs are separate, sigh....And the officer has his backside attached already!  FYI, the truncated packs gave me tarps and a piece of luggage for the Jock Campbell figure. 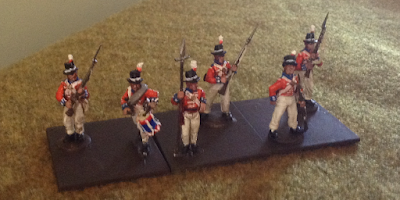 
This past week the Analogue Hobby Painting Challenge theme round was Risk Taker.
Be sure to see the wonderful submissions on the link. 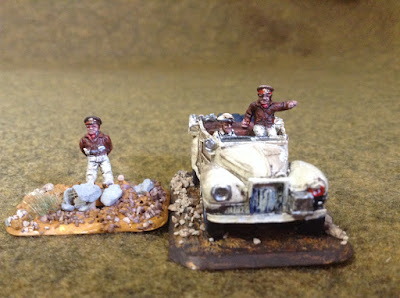 So for my submission to the Risk Taker Bonus round I have Jock Campbell, a key figure in the early Western Desert Campaign.  Campbell was an artillery officer who was with the 7th Armoured Division (the Desert Rats), and later promoted to command first the Division's Support Group and finally the Division itself.  He was killed in a car accident in early 1942 shortly after getting command of the division.    The mounted (ok riding a cut down station wagon).  and dismounted figures are 15mm by Battlefront.  The mounted figure is clearly based on this print from the OOP Osprey Vanguard 1.  Battlefront mounts this on a base, so I used what it came with.  However, I added some baggage - the valise in the back seat and a tarp or blanket roll in the truck.  (I'm curious to see if anyone guesses the origins of these).  If Campbell was Canadian he'd be waving an extra large double double  with a half eaten box of Timbits in the back. 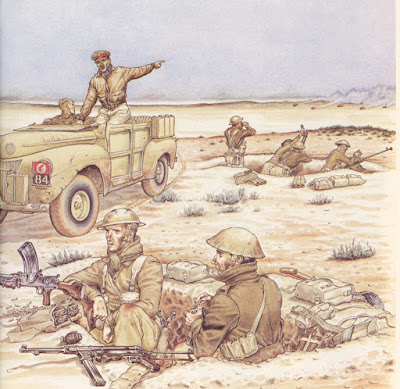 Much of the early Desert Campaign (the period pre-Monty basically) was a largely improvised affair using what was on hand and a giant dose of chutzpah.  Campbell was one of the most respected Desert Commanders (by both sides).  He was awarded the DSO after Operation Compass and Beda Fomm where his guns played a key role.  Later his bravery on the Sidi Rezegh airfield during Operation Crusader led to a VC. 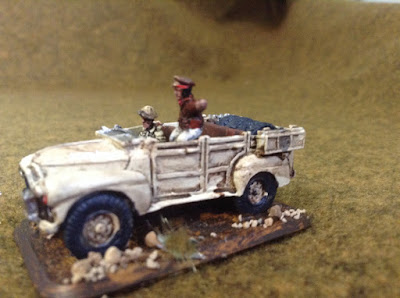 His name is also given to that most wargamer of formations the Jock Column.   Take a company of infantry, mount them in trucks and add a troop of light armour and some guns and bobs your uncle you got a Jock Column.  These were used to scout and harass enemy positions and just general mayhem.  Campbell did so well with them that they named the idea for him. 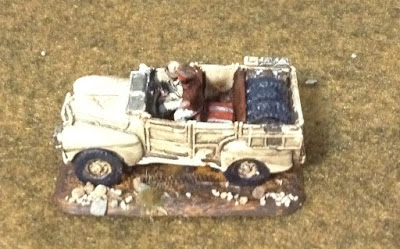 I would also point out that I am also a risk taker on this post and I am stepping well outside my normal comfort zone.   First, while I have painted many 15mms in my time (Nappys, SYW, Tudor English) these are my first 15s since 1997 (at least), it's been 28mms only for night on twenty years.  Second, I have with one small exception, restricted myself to historicals pre-1900 - Nappys, Greeks, Medievals, Renaissance, SYW, Colonials etc.    So vehicles, battledress, modern weapons, etc,  well out of my wheelhouse.  The one exception was a dalliance in Western Desert in 10mm in the early 1990s, long since sold off.

So having been swayed by BigLee's 6mm wonders and the excellent 28mm East African work by Scrivs, I have been swayed back to Western Desert 1940-1.  And there's another risk here, as Curt has figures in the same scale and period which I know I won't be able to match.  However, this is a project that I want to do for myself.

I have been amused by the number "god I hate painting X" posts over the Challenge.  Horses, artillery, tartans, shields, terrain, etc, etc, all of which seemed like great things to paint and a lot of fun.  I did make me wonder what level of childhood trauma had led to these dislikes in some case, but whatever.  Anyway my point here i.e., quit yer whining, get over your self imposed obstacles and Challenge yourself.  I stepped out of my comfort zone and so can you.

FYI, comments, suggestions and feedback on my initial step into this particular madness are appreciated.

The latest theme round at the Painting Challenge is Nautical, for which I submitted the Hesperus below.  Go check out the other wonderful entries which put my humble scratch bodge to shame.
This is the stern wheeler Hesperus which has been over 15 years in construction and is/was  intended for my Colonial North West Frontier campaign (aka Wascanastan).  II suspect that she can serve equally well in Pulp/Cthulu games.  She is roughly 28mm scale and it unapologetically intended as a flat out toy soldier bodge of a generic river/lake steamer, not a scale model of any particular vessel.   The dorky home made look is all part of the plan and hopefully the charm. 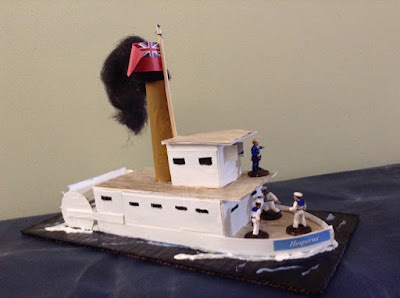 Construction details are spotty since it has sat in a 75% finished state in my basement(s) for over 15 years.  The superstructure appears to be foam core board with the main deck and sea base from sturdy corrugated card board.  The gunwales, upper decks and wheel look to be artist board and light card.   The vessel survived it's dormancy intact except for damage to the blades of the paddle wheel.

Over the last two weeks I have added the following 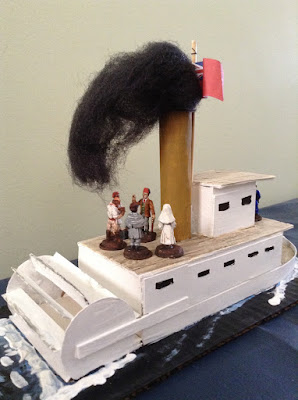 FYI the figures are from my Wascanastan collection and are mostly Rafm, with at least one Minifig for good measure.  These were painted in the last millennium for the most part so don't count for the challenge!

Hesperus is the evening planet Venus in Greek mythology, and a ship named Hesperus is the subject of a well known Longfellow poem.  I know about the poem not because of a fine classic liberal arts education or because I come from a very literary family.  Rather my knowledge comes from two sources.  First my retired Navy Office dad teasing an old ship mate would have served as an officer on HMS Hesperus during WW2.  And also because an image of the Wreck of the Hesperus apparently appears prominently on the anatomy of Lydia the Tattooed Lady.  As the song say, you can learn a lot from Lydia!