Ok this will be my second take on this post.  I had a post all ready to go on Tuesday the 6th, but it disappeared into the ether while under final edit from my Minion.  Murphy's law of backups applied.  I typically copy the draft post over to my own blog before it goes live, but schedule it to appear 2 days later than my Challenge day.  But, oh course this week I figured that I could catch that up in the evening after Ray made it go live.....

So I've got the remaining 16 members of the Diesbach Regiment from the Seven Years War, one of several Swiss regiments in the French army.  I didn't split out the new figures from the 8 I did earlier, so I've got the full battalion of 24.  Figures are mostly Crusader with some Front Rank thrown in.

Like the UK, Regina had a major dump of snow this week - 35-40cms from Sunday to Tuesday.  I took advantage of the heavy snow to ski to work on Tuesday.  I only get to do this rarely since it requires a heavy snow fall without the deep freeze. Most importantly I need to get out before people shovel the selves out as I skiing on the streets and sidewalks. 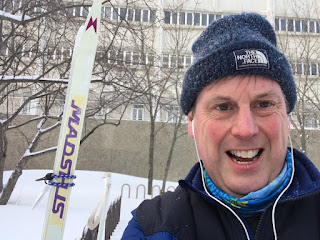 Finally, I thought I would share this rare footage of Ray following a hard days work at the Minion keyboard and totalling up terrain scores.


To make it easy on Ray's brain I'll do the heavy lifting for him.  That's 16 newly painted 28mm figures for a total of 80 points.
Posted by Peter Douglas at 9:42 AM 6 comments:

A slight change in direction from French SYW to their Anglo-Allied opponents.  I had planned to submit the last members of the Diesbach regiment, but these guys were closer to being ready so decided to focus on them to keep the ball rolling.  So we have 16 members of HM 23rd Foot, better known as the Royal Welsh Fusiliers.  These are all Front Rank figures and mighty fine figures they are indeed, I just wish they did more variation in poses like the Perry's variations on a common theme.

The term Fusilier was used differently by various nations in the Black Powder era.  In the French army, a fusilier is a regular GI Jean while in the Prussian army and minor German states a fusilier regiment was a second rate infantry regiment later converted to a light infantry role.  But it the British Army it was used as a mark of distinction, originally used to denote the three regiments used to guard the artillery train.  Back in the matchlock era they were armed with flintlocks or fusils as waving lit slow match around loose powder was unsafe even by 17th century OHS standards.  The also got to wear spiffy fusilier caps instead of the bog standard tricorn. 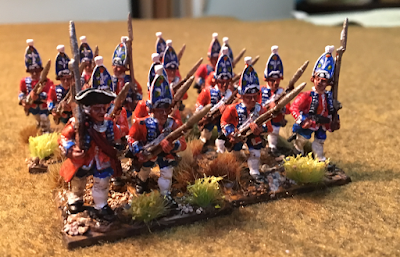 The quality of British Infantry was iffy during the WAS and '45, with some good regiments and some poor freshly raised units.  But during the SYW, most of the units that saw action were first rate (except a couple sent off to New England early in the FIW).  And they made a mark for them selves in their first big battle on the Continent - Minden in 1759.

To me Minden is the start of the thin red line.  Six British battalions (including the 23rd) and the Hanoverian foot guards plus some supporting artillery ended up advancing on the main French cavalry formation due to a misunderstanding.  It was a classic case of an "Unauthorised advance" or blunder roll.  A few battalions of redcoats facing the mass of the French cavalry - who charged them in 3 waves (kind of like Agincourt) and got shot down by close ranged musketry for their pains.  None of this namby pamby hide behind a ridge in square like their grand kids at Waterloo either.  This was advance in line with drums beating and flags flying proudly.  Stirring stuff.

Oh yes and they did it with roses in their hair - the tradition has it that the redcoats picked wild roses from the hedgerows and put them in their hair before battle.  This is still commemorated in regimental Minden Days by the successor units to the regiments involved.  I tried to add autumn foliage to represent the roses but this turned into an epic fail. 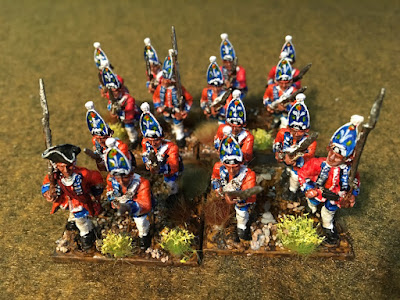 Painting wise this was pretty much a standard 18th C paint by numbers job- scarlet coat, blue facings, white lace etc.  The Front Rank figures were very nice to paint, with the lace and belts standing out well.  The fusilier caps had a the Welsh trio of Ostrich feathers surrounded by golden branches - I applied a two foot standard to get a reasonable on table facsimile of this.  There are another 8 fusiliers to come but these include command figures which are a little more involved.