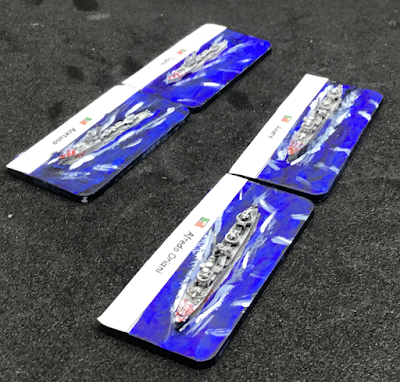 It's been a week since my last post and all I've got to show for myself is these four little ships worth a whopping 8 points.   These are 4 1/2400 scale Italian destroyers and torpedo boats for my WW2 naval project.  The original plan here was to model all of the ships that took part in the actions over a 6 month period from destroyers up.  We'll see how far I get with this plan but at least I'm getting a good variety of escort vessels for a decent campaign. 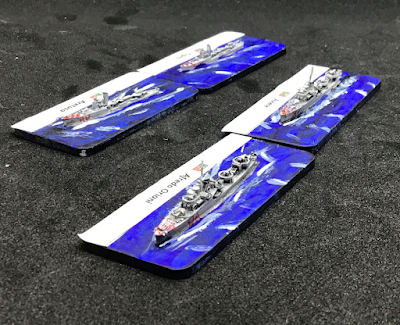 Closest to the camera are two GHQ models of the Soldati class Aviere (aviator) and the Poeti class Alfredo Oriani.  Both models are sold as Soldati class but the Soldati were only slightly different from the preceding Poeti class.  Leave it to the Italians to name one class of ships after poets and then name the lead ship of the next class after the Blackshirts!  Both of these ships were heavily engaged in the convoy battles. 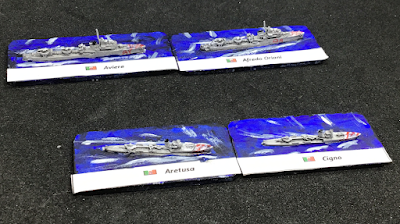 Now we have the Spica class torpedo boats (or destroyer escorts) Aretusa and Cigno.  These are CinC models.  With both navies mining classical mythology for ship names its not surprising that there could be both an Aretusa and HMS Arethusa on table.  At least it's not Trafalgar with two Neptunes plus a Neptuno!

So that is 4 hulls at 2 points each for a grand total of 8 points for my overall totals and my Naval Side Duel total.  I think I need another 25 hulls or so to catch Adam assuming he stands still for a while.  Don't hold your breath on that happening.
Posted by Peter Douglas at 11:09 AM