Following on from previous posts I think I'm reaching the end of the destroyers in house.  These are 5 allied N class destroyers plus another radar blip dummy counter to represent an unknown sighting.  The models are all CinC, 5 are J/K/N class and the sixth is a spare "L" AA type.  CinC sells these in packs of 5, but there were only 4 in this particular configuration so spare one became a dummy counter. 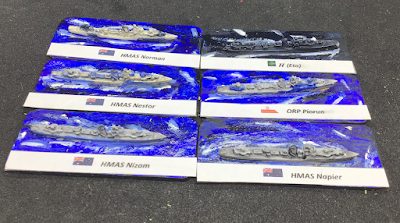 Given the mess ups over the L/ M class, the next batch of Royal Navy destroyers went back to the successful J/ K class design.  They did manage to fix he one odd feature so that the rear "X" mount now was able to fire astern.   None of these ships served in the Royal Navy during WW2 although a couple did RN service after the war.  Five were manned by the RAN, two by the Dutch Navy and one by the exiled Polish Navy.

HMAS Napier, Nestor, Nizam and Norman split their service between the Med and the Indian Ocean before heading to the Far East in 1944.  I've tried my hand at period camo again, including a couple with a tan base which was effective against the North African coast. Nestor was sunk off Crete in 1942 and was the only RAN ship never to serve in Australian Waters.  HMAS Nizam was named for the Last Nizam of Hyderabad  who paid for her.  That's how you roll when you're the richest man in the world.

ORP Piorun served both in the Atlantic and the Med.  She was one of the destroyers who engaged the Bismarck at night prior to the Bismarcks' final battle.  She is said to have sent the signal "I am a Pole" by signal lamp prior to engaging.

That is 6 hulls of 1/2400 scale ships for another 12 points, which also count in my Naval Side Duel.  There are more ships to come but I'll have to join Mr Peabody in the Wayback machine to go back a few centuries.

The Cap'n likes these, oh yes he does! In fact, there is a local memorial service for NIZAM in a few weeks time which I am attending. In her spirit I grant a bonus points for each RAN vessel you have delivered here today - 16 points for you Peter!

Posted by Peter Douglas at 8:01 AM