Another four Royal Navy destroyers from my WW2 med theatre project, these representing the four L class destroyers armed with 4" AA guns as main armament.  All four ships served in the Med and were lost there between January and May 1942.  HMS Lance and HMS Lively were part of force K with HMS Aurora and HMS Penelope, which had some notable successes in its brief history.

The design history of the L/M class destroyers had a number of bumps that were unfortunately matched by my attempt to proceed models for the ships.  Fresh not the heels of the highly successful J/K class of destroyers, the naval design team decided to do what all designers do and improve a good thing by changing to a new main armament.  The new 4.7" gun fired a bigger shell, had some high angle capability and had an improved gun house.  But it never worked as an effective AA gun and and the director was overweight giving structural issues.  Simulatenoulsy the RN had an internal bun fight over the best light AA guns for destroyers, and the class was initially designed without any light AA while this was sorted out.  As a result four of the "L" class were given 8 4" AA guns in stead of the 6 4.7" of the other 12 L&M classes.

So onto the model issues.  GHQ does not do either an L or M class destroyer but CinC does three different ones!  One is clearly an M class with the 4.7" mounts - these were big enough that the Italians thought the ships were cruisers on first meeting- but there are two labeled L class AA.  I ordered a pack of 5 based on what I could see on the website  and had these prepped and primed for the start of the challenge.  However, when I opened Mal Wright's excellent book on Naval Camouflage I noted that the rear guns mounts on the models didn't match the pictures in the book.  This likely wouldn't bother anyone else but having researched and ordered models to fit particular ships it bothered me.  So I went bak to the CinC webstore and ordered the other pack of L class AA destroyers which do look like the pictures i the book and those are what I've shown above.  I can't figure out what the other casting is supposed to represent but it sure as heck ain't an L class destroyer.  These casts became some of my greyscale unidentified sightings along with the extra correctly modelled L class, since CinC sells these in a pack of 5 and there were only 4 ships. 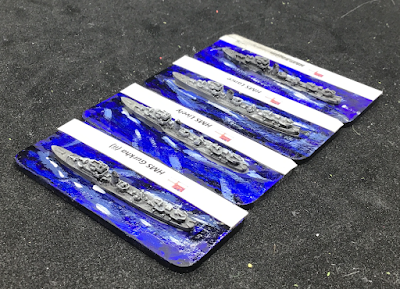 Challengers who paid attention while watching Sesame Street will note that Gurkha does not start with an L.  The ships was originally to be named HMS Larne but this was changed in honour of the tribal class destroyer lost in 1941.  The Gurkha regiments did a crowd fund to pay for the ship and command was given to the brother of an officer in the Gurkhas.

Excuse the ramblings, but to sum up that is 8 points for 4 hulls in 1/2400 which also count towards my Naval Side duel efforts.

Posted by Peter Douglas at 8:00 AM