Some pictures of another unit of Late Roman Infantry, the Auxilia Palatina Batavi Iuniores.  This unit was one of the crack regiments in the Gallic Field Army and was sent to Britain under Count Theodosius to quell the Great Conspiracy.

I chose to model them partly because of their role in 367 CE, partly because I like the shield design, partly because they have a cool reenactment group and partly because a lot of Batavian cohort served in Brittania over the years.  I did them up in lorica hamata chainmail, but there is debate about which if any infantry units wore armour at this time.  I have decided that this was a pretty crack unit and that they'd likely acquire armour themselves if it wasn't provided for them. 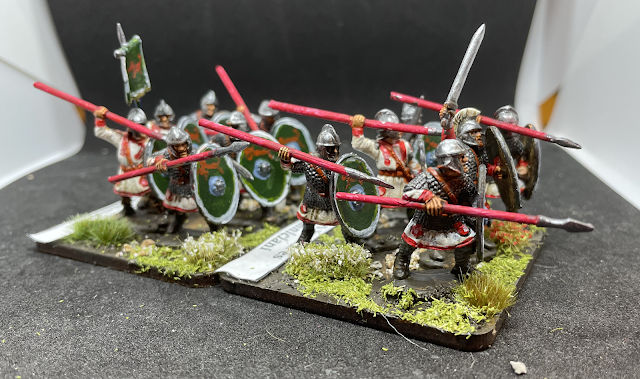 Figures are all Griping Beast plastics.  The GB Roman infantry box comes with 8 spurs each with five figures, 2 armoured with sword/spear, 2 unarmored with sword/spear and two unarmored archers.  There is also a command stand with officer and a second figure who can be a standard bearer or musician.  I think there are 8 o the armoured torsos, 2 of the unarmored spears and two command figures in the unit of 12.  Despite there only being one torso of a ranker in lorica hamata (chain mail), I found that by choosing different arms and helmets I could come up with a pretty good variety of poses. 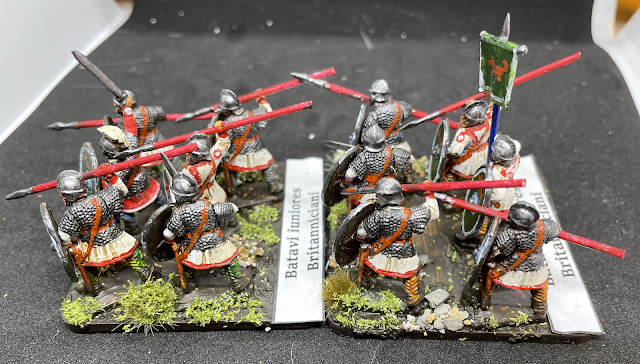 The weapon hands in chainmail include one with sword, one with spear overhand and one with spear underhand.  There are also three variants on the shield hand and several helmets to choose from.  Mixing and matching along with slight variations in position mask the common torso on 8 of the 12 figures, although somehow I mangled to get guys in similar breeches lined up together.  I painted the spear shafts red, which looks cool and has some historical basis.  I'm not sure why I did  the vexillum shaft in blue! 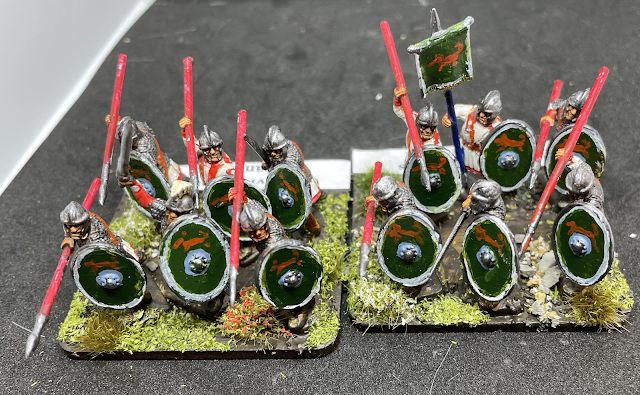 I free handed the shields, so they look way better on table than they do close up  in the bright light box.  The shield in the ND is shown below, with the the helpful description that it contains a mammal!  I figured that I could paint an unspecified mammal, but it looks like a fox to me.  Certainly not a platypus, pachyderm or moose.

Posted by Peter Douglas at 1:12 PM