My submission for the fellowship round is a band of nine intrepid fantasy adventurers - three fighters, an archer, a mage, a healer two thieves and a ranger.  Oh and they are also seven mice, a shrew and a gecko! 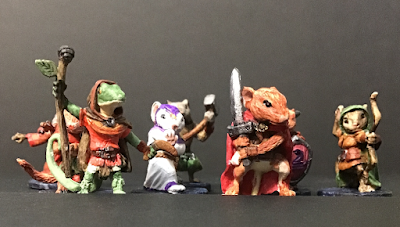 Here's the full set, although a couple of the shy ones are hiding in the back row.  I'll see if I can draw them forth shortly.  These miniatures come in Red Hat's board game Mice & Mystics and its expansion Downwood Tales.  The game features a royal (Human) household that overtaken by an evil sorceress and the heroes change themselves into mice to escape.    long the way they battle cockroaches, rats, centipedes and spiders (including their human enemies who also morph themselves).  It is a surprising good play, with simple rules,  great story line scenarios, a good challenge and lots of nice colour.  The currency is cheese, there's a ring of cat strength magic item and triggering a mouse trap means that your mouse both takes a hit and gets a cheese.  Better yet you can find a dinner fork and mouse-a-pult yourself over danger.


First up we have the leader, Price Colin in his red cloak flanked by his counsellors Tilda the healer and Maginos the mystic.  Tilda also fights with a nasty mace and gets more deadly if she's defending wounded comrades.  Maginos has his familiar wyvern Meeps who's been transformed into a lady bug.


Next up we have the royal armourer Nez, flanked by Filch the scamp and Lily the archer. Nez is a tinkerer (which is sometimes useful) and a warrior which is always useful especially when he uses his Thundersqueak ability.  Lily has always been a mouse and is a member of a local mouse clan that Colin befriends.  We meet her in one of the early scenarios when they rescue her from a mousetrap.

The last set of three are characters that we will meet in the expansion game as Colin and fiends venture into Downwood.  As with Lily, these characters have always been critters.  Jakobe the gecko is their guide and carries a boomerang.  He looks chatty and may try and sell us car insurance.  Ansel is a valiant mouse warrior and wears a serpent scale breastplate.  Ditty the shrew is a scamp.  She carries a peppercorn sling and a fiddle.

I'm not sure if Sarah's Challenge includes only human characters.  But there are three female anthropomorphic rodents in this groups so I've tagged them any way.  Here are the three ladies in question, Mother Hen Tilda, Adventurous Lily and well keep a hand on your valuables Ditty.


FYI when we play M&M, I play Tilda, Curt plays Filch, Sylvain is Nez, Jeremey is Maginos and Stacey is Colin.
Points wise these figures are shorter than 28s and taller than 20s.  I'll leave it to the gods and GMs to work out my points
Posted by Peter Douglas at 3:21 PM